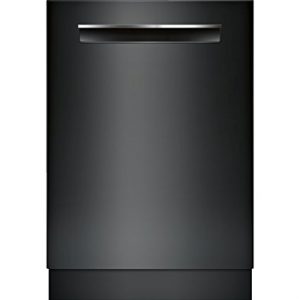 Welp…since the (radically expensive!) kitchen faucet croaked over, every appliance in the kitchen has decided to do the same. The dishwasher died: when I rolled out of the sack yesterday morning, having turned it on about 9:00 the previous night, the damn thing was still running!

I managed to get the Bosch service folks on the phone, and they arranged to send a repairman over…next Monday! In the meantime, I’ve been cooking and cleaning out of the garage, which mercifully has a work sink. Otherwise, with no kitchen faucet and no dishwasher, the only place I’d be able to prepare food and wash up would’ve been a bathroom.

Also meanwhile…a while ago, the water dispenser on the refrigerator quit working.

Both the dishwasher and the fridge are 16 years old — installed when I moved into this place — and so it’s not surprising that they should be giving up the ghost. At one point, a repairdude remarked to me that modern appliances are engineered to crap out after 7 years. So…what is surprising is that they’ve lasted this long.

Frank the Plumber is due to show up tomorrow to install the new faucet set…sometime…whenever. So I figured if I’m ever going to get a functioning dishwasher in there, I’d better sally out today, in search of a replacement for the Deceased.

At my favorite local vendor, B&B Appliances, the sales dude tried to persuade me that I really didn’t want a Bosch; I really wanted a KitchenAid. B&B sells refurbished used stuff and also dented and returned new appliances, like the Sears Outlet used to do. You can get some exceptionally good buys there, and in addition, the staff is highly knowledgeable, inclined to chat, and honest. He presented me with a Kitchenaid dishwasher: $650;

He didn’t have any Bosch models on hand just then. And more to the point, because I just figured to replace the Deceased with another Bosch, I hadn’t looked up any reviews on the Web or done any product comparisons. So I retreated: back to the Funny Farm to look up the brands.

Googling reviews of Bosch and Kitchenaid dishwashers, I found them both highly recommended, but the Bosch was running just slightly ahead of the Kitchenaid. And there were fewer embittered complaints from whiners about the Bosch than about the Kitchenaid. Hence, it was off to Best Buy, Lowe’s, and HD, there to inspect their offerings.

Conveniently, Best Buy had the Kitchenaid and the Bosch models displayed side-by-side!!! Sooo….it was easy to compare the internal layouts and their control panels.

It’s hard to beat the Bosch. Even if you’re Kitchenaid. Best Buy will deliver it on Monday. So they say. Home Depot delivers for free. Lowe’s is famed for its delivery rip-offs, so you should never buy anything there that needs to be delivered. Best Buy charges $50 to bring the dishwasher to your house, plug it in, and cart off the old one. 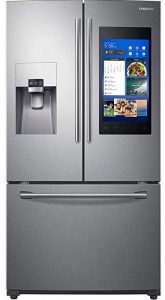 While at BB, I looked at refrigerators. Unimpressed. Tried Lowe’s, which resides right across the parking lot from the Best Buy. Found one that looked like it might be OK, but…. They had exactly zero (that is 0.00) sales staff on the floor. Not. One. Person. And of course you have the problem that Lowe’s is renowned for its haphazard delivery practices and customer service.

Drove down the road to Home Depot, where I found a perfectly fine sales dude but an amazingly unimpressive array of choices.

Or maybe the other way around: so impressive as to be off-putting. Have you looked at refrigerators lately? Forgodsake. They’ve computerized the damn things. No kidding. The guy proudly showed me a couple of models that have annoying computer screens on the door, monitoring not only what is in the fridge (“you need to buy milk!”) but who’s at the freaking front door! Just what I need: a televised refrigerator show.

These contraptions, I decided, are agglomerations of gadgets designed to break. And to make you crazy.

So I started looking at THE most low-tech models I could find.

Eventually I found a freezer-on-top Whirlpool that looks very much like my ancient Kenmore, only without the ice-maker or water dispenser. I see I failed to write down the price, but if memory serves, it was about $650, plus $100 to install the ice-maker.

My patience wearing thin, I decided I would think on this and then come back another day to buy…whatEVER.

At any rate, on the way home from the HD, it occurred to me that the plain-vanilla vacation-retreat-cheapo no-frills fridge is all I need. Why do I need an ice-maker, when I have a free-standing freezer in which I can stack scores of ice trays? Why not simply buy the plainest, least gadget-ridden model and call it a day? How hard is it, after all, to buy a bag of Crystal ice and dump it into the ice-cube box that I can steal out of the old fridge? Hm. We used Crystal ice back in the day, when our first refrigerator with an ice-maker made THE most vile-tasting ice you can conceive of. Crystal makes great ice.

And…hmmm… If one were going to end up with a plain top-freezer refrigerator with no water dispenser and no ice-maker…well…why buy one of those when that’s just about what I have? The ice maker still works. My life did not end with the demise of the water dispenser, and for that matter, not having to track down refrigerator filters and wrestle with the damn things trying to get the old one out and the new one in represents a positive improvement in life.

Sooo…why buy a new refrigerator at all, if you’re going to end up with a brand-new version of exactly what you have: a top-freezer fridge with no water dispenser and (soon, no doubt) no ice maker? If the refrigerator compartment works and the freezer compartment works, is there really anything else you need?

And so, we contemplate a step backward in time. Keep the fridge I’ve got. Opt the 21st-century gadgetry. If and when the 20th-century ice-maker freezes up, simply turn off the water to the thing. And run it until it dies…which is likely to be a pretty long time. Then, when it does die, replace it with the plainest plain-vanilla model on the market.

In fact, it might be worth just buying one of those plain-vanilla models right now, thereby heading off the fiasco that will happen when my refrigerator croaks altogether at 5:00 p.m. on a Friday evening right before a three-day weekend. Which, as you know, is inevitable.

8 thoughts on “The Appliance Jamboree”