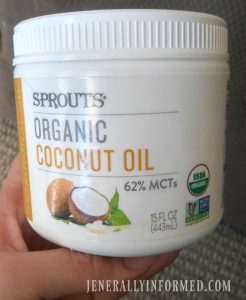 Couple of days ago, I’m sitting here on the bed, reach for a glass of water, and wap! knock over a container of coconut oil that’s sitting there.

Dayum! Coconut oil is usually more like butter, congealed into a soft, greasy solid. But in this heat, the stuff melts and turns to liquid, kind of like olive oil. Only sweet-smelling. Naturally, the lid was loose (wouldn’tcha know it) and so oil spilled all over the top of the nightstand.

Jump up, haul the lamp and phone off the table, and run for the paper towels! I was, as you might imagine, pissed. But…after the mess was cleaned up, I thought…waitaminit here! This old nightstand looks great!

“Old” is the operative word for this piece. My mother bought it as part of a set when we came back to the States after 10 years in lovely Saudi Arabia, living with steel company furniture. That was in 1958: sixty-two years ago. It was nice furniture and it’s been reasonably well cared for, but as you can imagine, it’s got some wear & tear on it.

Was it greasy? No, not after I buffed the oil off. It was very nicely polished.

Well, not surprisingly, plenty of folks have thunk it: naturally, I google this phenomenon and discover any number of websites describing the use of coconut oil as furniture polish. Many of them suggest adding lemon juice, whose purpose escapes me. Some even suggest it can be used to oil raw wood.

So this morning I took it into my feeble little head to take on a major project: re-oil all the kitchen cabinets.

Tried the coconut oil scheme in an unobtrusive corner. Darned if it didn’t…look pretty darned good. Oiled the whole cabinet: hot diggety!!!!!!!  Gorgeous, and it doesn’t stink! So launched into the project (which needs to be done once or twice a year, willy nilly) of oiling all the kitchen cabinets.

This coconut oil idea is inspired. When the stuff slopped on the nightstand, I was a) surprised it didn’t ruin the finish and b) impressed at the result of wiping it off and polishing. Coconut oil smells good (as opposed to the scary petrochemical odor of furniture polishes and waxes), and it’s good for your hands. The odor doesn’t linger after you’ve buffed the wood dry.

Now I’ve got the hang of it.

I ended up spending a nice slab of the day polishing the kitchen cabinets, quite the little project. The result? It looks really nice…well worth the work.