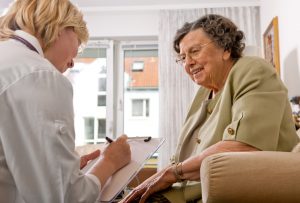 The other day I said I would address the issue of overmedication, and in particular the amazing overuse of anti-hypertensive drugs. Turns out this is a major problem, especially among older Americans and women. In 2017, a quarter of Americans between 65 and 69 were taking at least five prescription drugs for chronic conditions. Between the ages of 70 and 79, that figure rises to nearly half the population. This phenomenon is called “polypharmacy”: the use of five or more drugs.

This doesn’t include over-the-counter nostrums, many of which are real, active pharmaceuticals. If you count the pills you can buy off the shelf at your local Walgreen’s, no prescription asked, those figures are undoubtedly much higher.

Overall, women and the elderly are the most over-prescribed. Nearly 1 in 4 women between the ages of 50 and 64 are on antidepressants, according to the Mayo study. Researchers estimate that 25 percent of people ages 65 to 69 take at least five prescription drugs to treat chronic conditions, a figure that jumps to nearly 46 percent for those between 70 and 79. Doctors say it is not uncommon to encounter patients taking more than 20 drugs to treat acid reflux, heart disease, depression or insomnia, and other disorders.

The medicating of America has been increasing at a fast clip. The Mayo study reports, “The percentage of people who took at least one prescription drug in the past month increased from 44 percent in 1999-2000 to 48 percent in 2007-08.” By 2009, spending on prescription drugs had reached $250 billion: 12 percent of total personal health spending in this country.

And folks: that was eight years ago. This abuse has been growing exponentially for decades.

Many of these drugs are inappropriate or ineffective. So many, in fact, that there’s a name for such misuse: PIM, for “potentially inappropriate medication.”

Why should you care?

Because polypharmacy can harm your long-term physical and mental health. It ups the risk of drug duplication, drug interactions, and adverse drug reactions. Research has shown that medication use may be associated with poor functioning and impaired mental capacity among both younger and older people, and side effects of these drugs affect people of all ages.

“Polypharmacy may be problematic for a number of reasons,” says a report in the Journals of Gerontology. “For example it may increase the risk of using potentially inappropriate medications (PIMs) (3,4), which have been associated with negative effects on long-term physical and cognitive functioning (5). Polypharmacy also results in medication nonadherence (1,6), increased risk of drug duplication, drug–drug interactions (1) and adverse drug reactions (ADRs) (1,6,7), and higher health care costs (6,8,9). Researchers have also found that medication use may be associated with poor functional status and decreased cognitive capacity among older adults.”

At least 15 percent of seniors seeking care annually from doctors or hospitals have suffered a medication problem; in half of these cases, the problem is believed to be potentially preventable. Studies have linked polypharmacy to unnecessary death. Older patients, who have greater difficulty metabolizing medicines, are more likely to suffer dizziness, confusion and falls. And the side effects of drugs are frequently misinterpreted as a new problem, triggering more prescriptions, a process known as a prescribing cascade.

The glide path to overuse can be gradual: A patient taking a drug to lower blood pressure develops swollen ankles, so a doctor prescribes a diuretic. The diuretic causes a potassium deficiency, resulting in a medicine to treat low potassium. But that triggers nausea, which is treated with another drug, which causes confusion, which in turn is treated with more medication.

For many patients, problems arise when they are discharged from the hospital on a host of new medications, layered on top of old ones.

Why is this happening?

Almost certainly because of aggressive marketing by Big Pharma to the public (“Ask your doctor about…”) and directly to doctors. As you can imagine, the profit motive here is vast. With the Baby Boom evolving toward a Geezer Boom, we’re looking at potential profits of many billions of dollars. If we’re at $250 billion now, just imagine what these companies can make in the next few years if every Baby Boomer in the country is gulping down upwards of five meds — every day!

Doctors, being human, are as vulnerable to effective marketing and propaganda as the rest of us. Often they do not have time or energy to read journals that report these issues and that may clue them to PIMs — they rely on journal editors to sift the reliable from the unreliable (not necessarily a safe assumption). They often read only a study’s abstract, which may be inconsistent with the data reported in the article.

Pharmaceutical companies spend billions each year to promote their products, but little is said when drugs prove to be harmful or useless. Thus a doctor may not learn that a drug she or he has been prescribing has been found to be less than desirable for patients.

The Australasian Journal of Medicine observed:

It is telling that drug companies are spending billions every year promoting their products.4 It is also notable that many new drugs are withdrawn within a very short time of their launch.5 Worryingly, there is sometimes a relative lack of urgency when a drug is clearly shown to be harming patients. For example 19.8 million patients were prescribed five questionable drugs before action was taken to remove them from the market. This included painkillers, anti-histamines, drugs used to treat obesity and anti-hypertensive drugs. Not one of these were lifesaving nor, in many cases, were they the only drugs available for that indication. In another case physicians prescribed a new painkiller to 2.5 million patients with acute pain, even though many well-tested similar drugs were available and the drug was known to elevate liver enzymes. Similarly the rationale for not withdrawing an anti-histamine from the market as soon as researchers clearly identified it as causing deaths has not been explained.6 It is surprising that the drug was not removed from the market when the adverse effects were identified, but only after the manufacturer had developed a new product to substitute for it.

Medical and biosciences journals publish more than an article a minute. Even if a practicing physician could keep up with that torrent, much of what goes to print leaves a lot to be desired: “. . .only 5% of published papers reached minimum standards of scientific soundness and clinical relevance, and in most journals the figure was less than 1%.”

Much of this material, even though it appears in often-cited journals, is low in quality and ends up being retracted:

In the period from 2000–2010 a total of 788 papers have been retracted, i.e. expunged from the public record.13 Approximately three-quarters of these papers had been withdrawn because of a serious error; the rest of the retractions were attributed to fraud (data fabrication or falsification). The fakes were more likely to appear in leading publications with a high “impact factor”. The impact factor is a proxy measure of how often research is cited in other peer reviewed journals. More than half (53%) of the faked research papers had been written by a first author who was a “repeat offender”. This was the case in only one in five (18%) of the erroneous papers.13 At about the same time it was estimated that the number of articles published between 1950 and 2004 that ought to be retracted should have been as many as 100,000 and at least 10,000.14 The authors further conclude that although high impact journals tend to have fewer undetected flawed articles than their lower-impact peers, even the most vigilant journals potentially host papers that should be retracted.14

And scientific publishing is itself a profit-making enterprise. At the least, any scholarly publication must find funding to support its existence, even if it doesn’t generate a profit for the institution that produces it. Hence, sponsorship by pharmaceutical companies and related interests.

Doctors themselves distrust both Big Pharma and many of the research journals that should provide the basis for an evidence-based practice. A discussion forum for medical doctors addressed this issue. Said one commenter, who writes as “Swank Dieter,”

Those who do not read the journals are uninformed. Those who do read them are misinformed. Personally, I do not trust any article that appears in a journal that takes drug company advertising.

An oncologist signing himself as “Dr. Dave” remarks,

Even when I have to come up with crap to feed the insatiable hunger of my residents or Fellowship students I still rarely read the journals cover to cover or worse even the abstracts.

Time is the issue PLUS the quality of the articles has decreased so drastically in 40 years it takes too much time to read the article THEN sit down with paper and pen to decide if the actual stats are valid or if they were slightly nudged to make the outcome fit the title or sponsor.

There used to be a time where if it was written in a prominent journal it was as good as factual but today that assumption is SO inaccurate it is pathetic.
I can remember rounding with my mentor and being grilled on some nonsensical topic and if I was lucky enough to recall a JNEM article or JAMA article I was off the hook since they were bulletproof.

Now if a kid gives me ANY article as support my standardized reply is did you review the details of the article and are you SURE the statistics are actually proper and not sheer modification?

This is not just an American problem. Polypharmacy is a global issue among developed countries. QJM, a respected international journal of internal medicine, reports that in the UK adults over 65 consume a mean of two drugs a day, increasing to 2.5 at age 75. In Northern Italy, over-75s take a mean of 3.5 drugs a day, and in Denmark, four drugs a day. In Europe as in America, more women than men are targeted to take prescribed drugs.

So there you have an overview. The problem extends way beyond the so-called “opioid epidemic,” which is a manifestation of this issue. It touches not just people who have become addicted to prescription and street drugs — in some cases as a result of medical treatment. Excessive medication with prescription and nonprescription drugs affects all of us, and the practice is growing.

As I said the other day, the issue is too  large to cover in one post. So, in coming days I’ll address a few other matters:

5 thoughts on “The Drugging of America: Overprescription”