This morning a moment of chaos led to an impromptu kitchen cabinet clean-out. It’s not a large cabinet, but it’s one that holds stuff I use all the time, so it gets messy, what with all the shoving in and out of utensils and bowls. As I was setting stuff on the floor preparatory to cleaning the shelves and figuring out a better way to store things, I reflected that if I’ve been in this house for ten years—a proposition I still find hard to believe—then some of those things are really quite old.

There is, for example, a nesting set of stainless-steel strainers, which I use mostly as colanders. I don’t even remember when I bought those—I had them in the old house, and I may have brought them with me when I flew the marital nest. If that’s the case, then they’re a good twenty years old; in any event, they’ve been around for at least fifteen years. And they look and function just like new.

They weren’t cheap. I’m pretty sure I bought them at Williams Sonoma, or maybe from Sur La Table, a favorite source of gourmet cooking gear back when I could afford to buy anything my little heart desired. Williams Sonoma is charging $37 for the current version just now. But like the set of stainless pots and pans with the copper-core bottoms, they’ve lasted and lasted and lasted, through daily use and occasional misuse.

These are things that I couldn’t afford to replace today. Now, if a good piece breaks or wears out, I have to replace it with something cheaper, which about 97 percent of the time equates to something that won’t last. Case in point, the late, great cheapo percolator I bought to replace the very nice teakettle that gave up the ghost after many, many years of service. You may remember this: 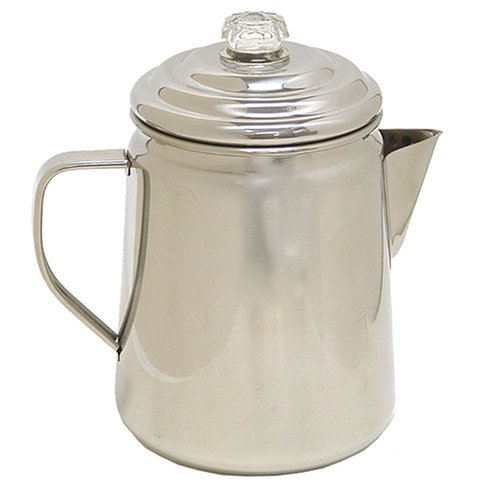 Came from Amazon. See that cute little glass bubble thing at the top? That’s where coffee perks up, if you’re using it to brew coffee. It has some half-baked threads that let you sort of screw it into the lid. They’re already shot: the lid won’t stay together anymore. As you’ll recall, I bought this thing last July. Now I need to buy another one.

If I’d paid two or three times as much for a teakettle from Sur La Table or Williams Sonoma, I’d have a pretty kettle on my stove (something that happens to please me, for it makes the kitchen look like someone lives here) that would survive another ten years of daily use.

But, being forcibly “retired,” I didn’t feel I could pay twice as  much for a teakettle that may very well last longer than I will. That’s because I couldn’t. This summer, with everything in sight breaking and expensive upgrades to doors and windows installed after the notorious Garage Invasion (which came within a gnat’s eyelash of becoming a home invasion) and almost no money other than Social Security coming in, I didn’t have the cash.

I’m glad that when I had a job, I bought as much quality as I could afford—considerably more than I can afford now. The Crate & Barrel buffet, the Thomas Moser rocker, the Restoration Hardware overstuffed armchair, the leather chairs and sofa, the Stickley side table (on sale!!!), the good set of stainless cookware, the Heath dinnerware: those will last for the rest of my life, never fall apart, and probably even retain their looks up to the end. Mine, that is. Though they were expensive, they actually were frugal: I’ll never have to buy any of these objects again.

When retirement starts to appear as a speck on the distant horizon, that’s the time to stock up on expensive, well made, and sturdy housewares, tools, and furniture. While you still have an income, buy for the future. It will save you having to replace cheaper stuff several times during your (heh!) “golden years.” The gold in them thar hills, folks: it’s pyrite.

8 thoughts on “The Frugal Virtues of Buying Expensive Stuff”