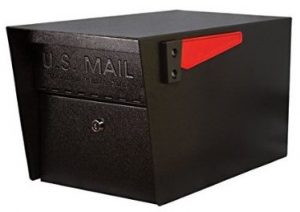 So yesterday Larry the Preferred Handyman surfaced to install the new locking mailbox I felt called upon to acquire in response to the repeated thefts. This thing, the Fort Knox of mailboxes, weighs about 40 pounds and is, as he remarked, big enough to hold a month’s worth of mail.

Which is good, because having to trot out to the street with a key in hand to pick up a wad of advertising circulars that will go straight into the garbage is infuriating enough that one will not feel inclined to do it often.

Larry charged $200 to traipse to Home Depot and buy a heavier metal post to hold it (the one that held the rural-style mailbox was too lightweight for the job), bang out the wad of concrete the old post was sunk in, sink the new post, and then figure out the obscure instructions to put the massive new mailbox in place. Fortunately, some of the 220 customer reviews at Amazon described the trick to installing the thing. At $200 (including the post), the guy was giving away his services.

So, to the $100 for the mailbox and the $200 installation, add the $75 I had to pay to rent a mailbox for six months to intercept incoming bills, checks, and packages, the $20 worth (wholesale!) of books ordered from the PoD vendor that got stolen, who knows how much for the expensive specialized stage makeup the roommate ordered that got stolen, and who knows how much, if any, in Medicare and Medigap checks that may or may not have been stolen.

Apparently mail theft is so commonplace the USPS doesn’t give a damn about your losses anymore. They make it impossible to report it. Infuriatingly, after I jumped through 87 berjillion hoops to post a theft report presented at their website, I got a message saying that was the wrong form and I needed to call their 800 number. Of course, when you call that number you get a robot. It asks you to leave a message and promises someone will call you back. No one does. After a week passes, you get an email asking you to fill in a survey reporting on how you liked their customer service!

God, how I hate the facelessness of our Brave New World.

The frequency of the theft issue is also indicated by the fact that over 200 people have purchased a behemoth like this thing from Amazon alone. Reviewer after reviewer says it was the only one they could find in the $100 range that is a) not easily jimmied open with an ordinary screwdriver and b) not equipped with a slot big enough for a person to reach in and grab the mail.

The slot is not large enough to accommodate a package, either.

Yesterday while Larry was doing battle with the installation job, I talked with one of the mailmen. He approved of the box (Larry was not thrilled, but Maildude was) and said these days they carry packages up to your doorstep anyway. My house has a walled courtyard, so packages aren’t easily visible from the street. So, despite one of the neighbors catching the thieving bitches on video as they drove up to her house, hopped out of the car, ambled up to the her front door, picked up a UPS package, strolled back to the car, and drove slowly on down the street searching for more loot, the ladies haven’t taken any packages that were delivered to my door instead of stuck in the mailbox.

The damn thing is SO ugly. It just pisses me off to have to spend $400+ and end up with an unsightly monster in the front yard. And it really pisses me to have to do it for the privilege of receiving mountains of junk mail from tree-murdering, ink-wasting, gasoline-burning parasites trying to sell me pizza and real estate.

I’m thinking what I’ll do is plant a vine that can trail up and over it. Don’t know whether I can get one to live there — the concrete under the ground won’t make for a very good growing medium, and the box and the post are black. During the summer, the thing the plant is supposed to climb on will get about as hot as a barbecue. I suppose I could paint the damn thing white, adding to the nuisance factor. But I don’t want to. Enough is enough.

Life in the big city. Please, God: send a grocery store, a gas station, and a competent doctor to Yarnell so I can move to the sticks!