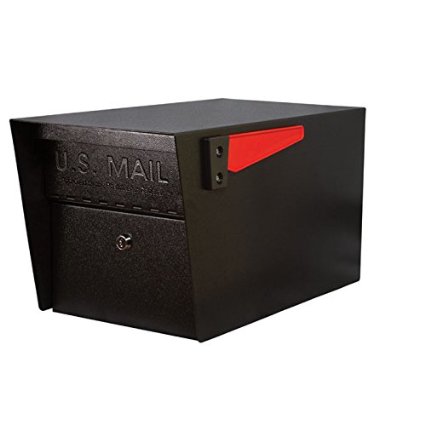 You’ll recall Fort Knox, the monster mailbox I had to install out front after last December’s series of mail thefts? It was infuriatingly expensive and a major hassle for me and my handyman to install, not to say a landscape uglification.

Welp, that thing just paid for itself.

This afternoon I strolled out to pick up the mail and spotted WonderAccountant across the street wrangling a bug spray guy, so naturally I went over to chat. In passing, I mentioned that the dreaded PayPal was supposed to send a $1350 check to the S-corp. And of course, she already knew about the $568 the community colleges owe me and so far have yet to pony up.

Her office window looks straight into my front yard. In the course of conversation, she remarked that a few days ago she saw a man in an unmarked white van pull up in front of my mailbox. He sat there and stared at the mailbox and the house for a few minutes, and then moved on.

I said he was probably discouraged by Ft. Knox.

She said probably so; he’d moved on to our neighbor’s house, where he (or someone) broke into and robbed their locking mailbox.

I said ah hah! That explains the locking mailbox plate I’d found in my front yard the other day, where someone had thrown it.

It must have been the neighbor’s. It had been prized off and tossed on the ground.

Unfortunately, I’d already thrown it out and the trash had been picked up, so I couldn’t return it to them.

The PayPal check was in the mailbox when I unlocked it after this conversation. So it looks like Ft. Knox saved me from either a close call or a real loss. How the heck I would ever have extracted a replacement check from PayPal, renowned for its customer service recalcitrance, escapes me. I would just have been screwed, especially if the guy had managed to cash it.

At any rate, evidently the thieves are working the neighborhood again, and evidently they’re not deterred by locking mailboxes.

Our victimized neighbor’s is old. It’s been there as long as I’ve lived here, a good 12 years. So it was probably fairly easy to prize open. Still, the plate was quite heavy. The lock was still locked — the sh!thead had managed to break the plate off the steel box, which is mounted in a masonry pillar.

So…it’ll be quite a job for the young people to get that fixed, and probably an expensive one.

One of the reasons I sprang for the thing’s extra cost is that several customer reviewers who seemed to know what they were talking about remarked that it’s very hard to pry open. Apparently there’s a YouTube video that shows some guy working for 15 minutes before he could break into it.

Apparently the current thief thinks that’s the case, since he moved on to an easier mark.

1 thought on “The Mailbox Thief Jamboree”