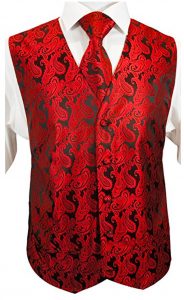 Who knows what secrets lurk in the hearts of women? Ever wonder…first, at the secrets you held when you were a young thing, and second, what became of those secrets? One of mine is the Man in the Red Tuxedo.

The Man entered my life in my sophomore year at the University of Arizona, introduced to me by a friend I’d met in the dorm.

Jim was not a good man. To the contrary. He was the kind of man who was attractive to women who are attracted to the Dark Side. And I, decidedly, was one of those women. He hung around briefly that year and then he left, and I was privately glad to see the dust rising from his heels.

Several years later, though, he resurfaced. How exactly he found me, I do not recall. But he did. I had graduated from college, landed a piddling little job, and had recently moved into an apartment. So it was early in 1967.

Well, we immediately started dating again. My parents had badgered me into breaking up with the true love of my life, who himself was…we might say, not the best of all possible men. Ultimately I would have shown that guy the door on my own initiative, but because of the circumstances — long story short, my parents inflicted a surprisingly effective variety of emotional blackmail — I missed him very much, felt guilty about having dumped on him, and wanted a man. So, we became an Item.

A fairly rocky Item, because, as I say, he was not a good man. My mother, so happy was she to see the end of the guy I’d been dating for the prior three years, deluded herself that he was a wonder and a joy and the handsomest thing that ever came along.

He was handsome, in a rough way. More or less. When he was sober.

Jim came from Yuma, where his supposedly widowed mother still lived. He claimed to be living off the proceeds of a large inheritance, which, he said, had been put in trust for him. Every now and again, he would make a drive to Yuma to “rip off some cash from the trust.”

Jim was active in the Republican Party here in lovely Arizona. He had attached himself to a Yavapai County congressman as a kind of informal man for all seasons. Because he had been treated, in the past, for some kind of mental illness, he could not run for political office, but he dreamed of becoming a power behind the power — a small-time, primordial Steve Bannon, I guess. His mentor was not a great guy, either. One of the chores he assigned to Jim was scouting up prostitutes to entertain visiting politicos, of whom a few would drift through in a fairly steady stream.

Jim and this state representative had attended the 1964 Republican convention that nominated Barry Goldwater, where they involved themselves in a number of petty acts of vandalism intended to support their hero. An early rendition of “dirty tricks,” you might say.

One day, Jim decided to accompany me and my mother on a shopping trip to Diamond’s Department Store, at that time one of the most upscale merchandisers in the state. It was on a par, I’d guess, with Saks Fifth Avenue today. If such stores thrived now to the extent they did in the mid-twentieth century.

Remember S&H Green Stamps? In those days, Diamond’s dispensed them. My mother collected them and furnished our house with the Target-quality Green Stamp give-aways. She collected assiduously. Keep that factoid in mind.

So at Diamond’s, Jim directs us to the men’s department, saying he wishes to buy a red tuxedo and wants to view the store’s offerings. Forthwith, a salesman shows our man his wares, and they indeed do find a red-toned tuxedo jacket. It’s not a scarlet number like the one in today’s FaM banner, but black with some kind of pattern — probably paisley — limned in red.

He buys himself the red-patterned jacket, a cumberbund, a bow tie, a vest, a pair of black slacks, and such like, racking up a handsome bill. All this, he pays for at the register with cash.

The delighted salesman hands him a stack of sheets filled with Green Stamps, eliciting a blank look from Jim.

It used to be you got one stamp for every dime you spent at a participating merchant. I don’t clearly recall the amount Jim spent. The figure that sticks in my mind is $600, but that seems unlikely. A quick cruise through Amazon suggests that today a tuxedo jacket and trousers go for something between $160 to $360; a vest, $16 to $50; a cumberbund, $7 to $23; bow tie, $6 to $20; suspenders, $5 to $10, for a total price ranging between about $200 and about $460. Presumably today’s clothing all comes from China and so is, in relative terms, much cheaper. But given the difference in the value of a buck, I think he spent about $200.

So…it is no wonder that when he turned to my mother and, with a courtly flourish, offered her the entire pile of Green Stamps, her jaw dropped to the floor.

From that day forward, my mother thought Jim was the most wonderful thing that ever walked the surface of this earth.

There was a lot she didn’t know about Jim.

In due course, though, I figured him out and told him to take a flying eff at the moon. His response was to commit a rape and then, thank God, to leave. Good riddance to exceptionally bad rubbish.

Time passed. About three months after I had married, the phone rang. It was my old college friend, the one who had introduced me to the dashing Jim.

Had I read the report in the morning paper about Jim? she asked.

Jim had been arrested driving across the desert from Yuma, carrying the largest haul of cocaine that had, to that date, ever been confiscated in Arizona.

Ha haaa! So! That was the “trust” and the source of his mound of cash money: the Mexican Trust. 😀

What became of Jim after that, I do not know (mercifully). Never heard from or about him again.

That was the Man in the Red Tuxedo.