Once again we’re reminded of how unhealthy it is for us to spend most of our waking hours seated at a desk or loafing in our favorite easy chair. The latest report tells us a 14-year study showed women participants who spent six or more hours a day sitting down were 40% more likely to croak over prematurely than women who spent the time standing or moving around; men got lucky this time—the sitting male is only 20% more likely to die.

Six hours? Six hours?? Would that I could get off my duff after only six hours! Dunno about you, but between blogging, editing, and grading papers, I spend eight to ten hours a day, every day—that’s seven days a week—sitting in front of a computer. That would be in normal times; get a crunch, and you can revise that figure upward to twelve, fourteen, sixteen hours. Easily.

We’re told, too, that no amount of exercise reverses the damage done by this habit. Holy mackerel. I’m doomed.

This is an issue that’s been nibbling at the periphery of my consciousness for quite some time. It doesn’t take a controlled scientific study to tell you sitting on your duff all day long ain’t natural and cain’t be good for you. For the privilege of loafing in front of a computer exercising my fingers ten to twenty hours a day, I’m paying in pounds. I’m getting fatter and fatter and fatter.

When your size 12 jeans are too tight, you know you’ve got a problem…

I keep telling myself I’m going to go on a diet, going to set a timer to go off every twenty minutes and make myself get up and stretch or walk around the house, going to take the dog for 30- to 40-minute walks twice a day, going to bicycle every day, going to swim 20 laps every day… Right. Well. Tomorrow, for sure.

All those promises go into the same trash barrel, along with the New Year’s resolutions and the good intentions.

The problem is the computer. It’s like a magnet. I can’t stay away from it, even when I’m not actually working. First thing in the morning, I stumble across the four feet between the bedroom and the office, turn the damn thing on, read the mail, read the Play-Nooz, write a blog post. Now it’s not the first thing in the morning anymore. And now it’s time to get down to work. Fix breakfast, throw down some food for the dog, and head back to the office to start computing for pay. When the work is done, do I get up and move around? Hell, no! I cruise the Web (StumbleUpon is one of my favorite toys), search my favorite news sites for the day’s most lurid stories, read other people’s blogs, comment on other people’s blogs, play Internet games, glance up at the clock…and it’s 11 p.m.! Haven’t had dinner, haven’t fed the dog, and most certainly have walked neither the dog nor me.

The computer is like the family TV of yore. Television was decidedly addictive. I knew people—many people—who ran it all the time, from the instant they rolled out of bed in the morning to the minute they went to bed. Some friends would have a TV in the bedroom, where they deliberately left it running as a lullaby to send themselves off to sleep—they’d put a timer on the thing so it would go off after they were out.

This, obviously, was not healthy. But the computer is worse, because it’s interactive. When a television is blathering, it’s sending its message at you: the noise and pictures are coming out of the set toward you, and your only task is to change the channel now and again. But, unless you’re running a movie or music, a computer demands that you physically be in front of it. To make it do its hypnotic thing, you have to be there feeding messages into it.

Okay. Flash forward to 2011. We now have these fundamental facts:

1. I am not gonna give up my computer habit.
2. None of us can give up our computer habit, because it’s now the basis of our lives and social interaction and, heaven help us, our livelihoods.
3. Whatever is to be done about the health effects has to be simple and easy to work into one’s daily routine…and that, I’m afraid, does not mean setting the kitchen timer to interrupt your train of thought every twenty to sixty minutes.
4. There actually is a very simple solution.

Yes. There is a simple solution: Stay off your duff while you’re in front of the computer!

Where does it say that you have to sit down to use your computer? You don’t. You can work on a computer standing up.

Before you fall off your well-worn chair laughing at this concept, consider:

Some years ago, I went through a spate of tenacious back pain. It hurt all the time, and it went on for so long I thought it was going to be a life-long problem that would never go away.

After a year or two of this, a friend who was a licensed massage therapist and yoga instructor started giving yoga classes at my house. The women in her group ranged from early middle age to their late 70s, and one gal was so overweight as to be disabled.  All of us were beginners. So, as you can imagine, the level of the yoga we were doing wasn’t very strenuous.

I found that after a few weeks of this, the back started to feel a little better. If such mild exercise helped with that very stubborn pain, I figured, there must be other things I could do to fix it. Maybe there was something in my life that was contributing to the pain, and maybe I could change it. My attention turned to my daily habits.

And on inspection, what should I find but…yes! A threadbare desk chair. I realized that then, as now, I was spending uncountable numbers of hours in front of the computer, and as I was sitting there, I was slouching grotesquely, perched on my tailbone with my feet up on the desk and my head stuck forward, staring at the screen. Hour after hour after hour.

The execrable posture and the fact that I sat in the same bad-for-you position most of the day had to have some bearing on the back pain. How many chimpanzees spend their waking hours sprawled in a chair with their feet on their desk and all the weight of their bodies bearing down on their tailbones? This could not be natural.

Well, years before, my then-husband had a law associate who dealt with his own chronic back problems by working at a standing desk. The firm special-ordered him a beautiful standing desk—it was a handsome piece of furniture—and he claimed this kept the back pain under control. 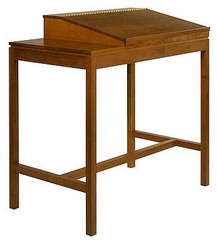 Ordering up a standing desk from Thomas Moser was out of the question. I certainly couldn’t afford to spend upwards of $6,500 just to see if it would work. However, gathering dust out in the garage was an old drafting table we’d bought for our son when he was a little boy. A brief inspection revealed that the top, meant to be used at an angle, could be adjusted to lay flat—at a height that would let you stand up to work on a computer.

So I washed it down, dragged the thing back to my office, put it together, set it up, and voilà! a standing computer table!

With my PC and keyboard perched on this thing, I had to stand up to work or play on the computer. A hard wooden stool, bought very cheap at one of those big linen & household goods stores that are now defunct, served as a perch when my feet started to ache.

And it worked! The back pain went away.

Soooo… Would the circulatory damage also go away (or not start) if a person worked standing up at a computer on a high table?

After the back had been feeling better for a good while, the table exited during a redecorating frenzy. The thing took up a lot of room and really made the office ugly and cramped. So I got rid of it.

Now, I guess, I need to get another one. Amazon has a similar model, only with a fake wood plastic veneer instead of a white plastic veneer. As you can see, these things give you a fairly roomy top—leave the pencil holder off, and you get an expansive flat workspace. The little shelf on the bottom is too flimsy to hold reference works and binders, as intended; but it works nicely as a footrest when you’re perched on a stool. Mine didn’t have that back thing, which would get in the way of your feet, but I’ll bet I could find one just like my old drafting table at an art store. 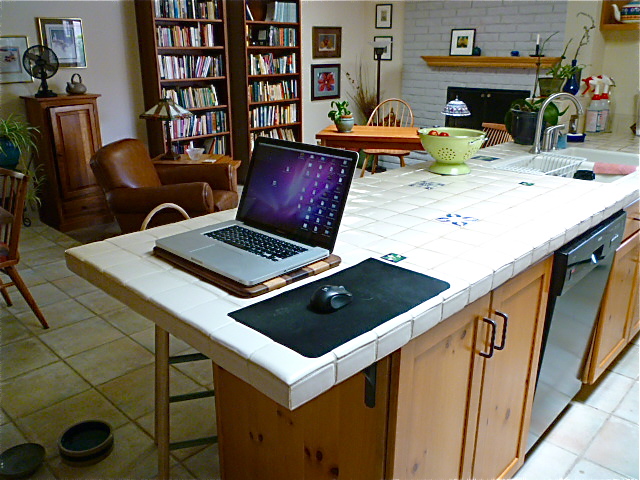 For the nonce, though, the solution is free: it’s called the kitchen counter. I’m working on a Macbook in the kitchen instead of on the aged iMac. In some ways, this is an improvement: the iMac is so old it won’t take Snow Leopard, and so I can’t load Lion into it, either. It runs at the speed of a galloping snail, which is one reason I pass so many hours in front of the computer: much of that time is spent watching the computer grind away…and grinding my teeth as it grinds its silicon innards. The MacBook runs like a rocket, by comparison.

Yesterday I read 60 pages of a new client’s copy—about five or six hours of work—while standing at the kitchen counter.

Sounds awful, doesn’t it? But not only wasn’t it awful, it had these salubrious effects:

• Forthwith I found that because I was standing up, I was inclined to take occasional breaks for short yoga exercises.

• All the time I was standing there, weight was bearing down on the osteopenic bones in a non-impact way. That’s exactly what your skeleton needs as it ages.

• Before long I realized I could practice balance exercises without interfering with work concentration. Get this: today I balanced on one foot for a full minute without teetering, and in fact quit only out of boredom, not because I fell over. This is huge for old ladies. And for men, gentlemen: you can fall and break your hip, too.

• I got through the work faster. A lot faster. Because I wasn’t loafing in a chair, I was less inclined to wander off to cruise the net, so I stayed on task longer. And because this computer runs faster, much less time was wasted on waiting for things to happen.

• The kitchen got cleaned the first thing in the morning—who wants to look at a dirty dish while they’re working?

Eventually, if I decide it’s a healthy thing to make permanent, I’ll have to get a new drafting table for the office. The kitchen counter is a little low for comfort, and it’s inconvenient to have the printer in the other room. For the moment, though, setting the MacBook’s cardboard carrying box under it holds it at the right height.

I think if I’m going to shove a tall table in the office, I’d like to get rid of the old furniture, replace the clunky old desk with a couple of lateral files, and go considerably minimalist. Less junk is better.

As less sitting is better.