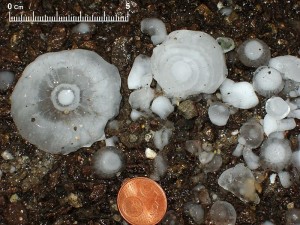 The insurance adjuster came by to see what was what with the air conditioning unit. Nice guy: in from San Antonio to help the local Hartford office cope with the flood of claims erupting from the late hailstorm.

He said the air conditioner was pretty well bashed and thought the company would replace it. That wasn’t surprising. The west-facing side of the thing, a set of tinfoil louvers that have something to do with the way the coils operate, had taken quite a smushing, and, the unit’s maker having gone out of business, the part is no longer being made.

But I was surprised when he said the roof was damaged, and The Hartford probably will pay to replace that—a brand-new roof, we might add.

And then, even more amazingly, he announced that the various dings on the KoolDeck around the pool, many of which appeared about the time of the great hailstorm, also qualify for an underwritten repair job!

A new heat pump is going to cost about $5,000 or $6,000, not counting the cost of installing it so it doesn’t overlap the skylight. The roof on this house, which I had put on a year or two after I moved in, cost something in excess of $5,000. And heaven only knows what it will cost to repair the KoolDeck…does anything happen for less than two grand?

Now that’s what I call a windfall!

4 thoughts on “THIS Is a Disaster? More news from the insurance front”