Feels like I’ve been incommunicada here, though on reflection it’s only been three days since my last post. Time shoots past as you fill it with…not very much.

Had some friends over for dinner today…first time I’ve done that in quite a while. One of them invited me to his place a couple weeks ago, and it dawned on me that if I had any manners I would reciprocate.

Well, I may not have any of those, but did manage to come up with a small group to socialize over steaks and wine this afternoon.

As we were cleaning up, the lever handle on the ancient, radically expensive Price-Pfister kitchen faucet broke off. Can’t say I was surprised — the thing is 16 years old and has been making a weird moaning sound for quite some time. Knew it would need to be replaced soon…but of course there’s never a convenient time to have your pocketbook raped or your kitchen sink put out of commission.

I bought that faucet when I had a job and could afford to buy nice things. At the time, too, I was hanging out with a woman who had gone through not one gut two extravagantly wealthy husbands, and she had the taste to match. She loved to decorate. When I moved into this house, she came up with the paint scheme, which interestingly enough is just coming into the height of style right about now. We liked to shop at The Great Indoors, a now-defunct enterprise of Sears, itself now all but defunct. There we found these fancy faucets. It looks very much like this, only mine has got a squirt thing for detergent (which I don’t use…never had any use for those things). 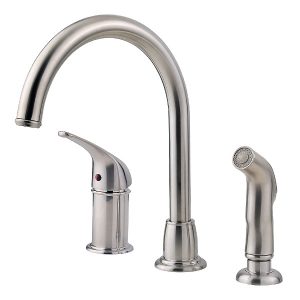 One of the guests is extremely handy and can fix almost anything — he thought he might be able to patch it together until the plumber could get here. But all we accomplished was to discover that a part on the inside is hopelessly busted.

Fortunately, this house has a sink in the garage, so the inconvenience is relatively minor.

It’s hard to believe I’ve been in this house for 16 years! Time — like life — flashes past.

Hmmmm… It appears that Price-Pfister has some kind of lifetime guarantee on its products. Wonder if I could find the receipt for that thing? I did save receipts for capital improvements to the house, and this comes under that heading. Tomorrow I’ll have to look for one. Wouldn’t it be amazing if I could get them to replace it? 😀

And in the likely to be radically expensive department, I bought some lettuce and some chard for dinner. Couple hours before people were due to show up, I went to make the salad, and discovered…both the lettuce AND the chard were effin’ spoiled! Jumped in the car and started to charge down to AJ’s., there to give ’em a piece of my mind and get some more produce, when I realized that was exceptionally dumb: there’s a Sprouts less than a mile from the Funny Farm. Shot by there and just bought more greens, thereby saving a substantial amount of time.

Stuck the refrigerator thermometer into the fridge: in the mid 40s. FDA says to keep the temperature “at or below 40.” The steaks, which were in the back on the top shelf, had ice crystals on them, so I assume the temperature madly varies according to where the food is stored. But…shee-ut.

The water dispenser is broken on that refrigerator. If now the thing is not keeping foods cold consistently, presumably I’ll have to buy a new goddamn refrigerator, presumably to the tune of a couple thousand bucks. I have no idea where to buy such a thing anymore, now that Sears is closed. Tomorrow, if there’s any time after I deal with the plumber, I’ll go by the appliance store to see if they can get me a new unit and install it. Though they deal largely in second-hand appliances for the convenience of landlords, they do also sell the occasional new model.

Dayum! Just what I need to keep me amused.

Ruby is lobbying for yet another chew treat. To my astonishment, not once did she try to sponge some food from anyone at the table. I expected to have to lock her in the back room, because I’ve fallen into the shameful habit of giving bits of kibble while I’m eating, and now she expects to be fed at table.

But nay! Nary a single beg! I thought I’d ruined this dog. But apparently corgis are not so easily ruint.

Beyond tired just now, having fallen into the habit of awaking at 3 in the morning. Four: that’s OK. Dawn is beginning to crack at that hour. But 3:00 a.m.? Not so much… 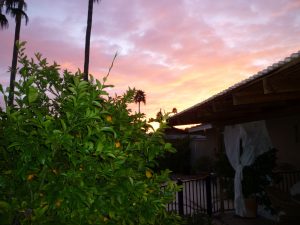 6 thoughts on “Thisses, Thats, and the Others”