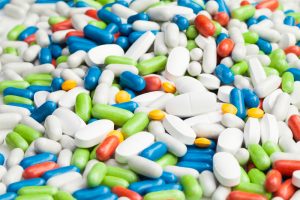 Woo HOO! There’s a book hiding in this pile of pills!

Tempus fidgets, as my mother used to say. She and about a million others in the Greatest Generation, I’m sure. True that, though: time passes so fast you don’t even notice it going by.

Yesterday, for example, I didn’t notice it was Wednesday. Thought it was Tuesday. Along about sundown it happened to occur to me that a whole day had disappeared. 😀 Tossed a blurb from Asked up online, but never did much else, partly because we had another sharp storm in the evening that threatened to blow down trees and power poles.

Just wrote that little piece on Quora — “Did You Ever Walk Out on a Doctor (because he was disrespectful…).” And right off the bat, it attracted something over 200 “likes” — a kind of a record. Since it went over so well there, I decided to add it to the Asked collection.

Another essay — on getting out of an abusive relationship — is closing in on 1,000 likes. Can you imagine?

In the middle of this, up pops a message from a client: did I receive the paper he’d sent me to edit?

Turns out the damn MacMail decided out of the blue to route messages from this guy into “Junk Mail.” This was several days ago. He sent me a new copy before I could find the original among the 105 unread messages in “Junk,” the 174 derailed to “Trash,” and the 415 (!!!!) in  the “Facebook” folder.

Holy shit! There is simply NO way anyone could possibly keep up with that tsunami.

Tuesday was one long struggle through the heat and humidity to stay focused on writing the proposal for the Drugging of America book. On reflection, I realized Chapter 1 covered way too much ground, and that I needed to break it into three chapters. That took most of the day.

So I now have three new chapters — for a total of 17, plus the introduction, plus the references section, plus a resources section. And now I have to revise the chapter outline. Whee!

But by the end of today, most of the proposal was drafted. Still have to write a self-aggrandizing bio, but otherwise the most difficult parts of that thing are done. Tomorrow I’ll finish the body of the proposal, revise the chapter outline, and get the thing ready to send off. I hope.

My plan is to send one proposal to one university press — the one I think most likely to publish this book. Then when (which is usually the case: when not if) they reject, I’ll send out a half-dozen at a time until someone bites.

And I think they will. This really is a great idea for a book, one whose time has arrived. And there isn’t much competition. Other than Barbara Ehrenreich’s latest eloquent rant, that is.

Texts that sell in college courses, as you can imagine, are the sine qua non of academic publishing. Sell a book to one professor, and you sell upwards of a dozen copies a semester. If it’s a decent undergraduate course — as you can bet will be the case in colleges of nursing — you’ll unload upwards of 30 copies per section. A required lower-division course? Hundreds of copies. Every semester. At a stiff price.

I was still getting substantial royalties from The Essential Feature 10 years after the thing went to press…because every professor who ordered it for a course spawned 30 or 60 sales. Per semester.

So…that’s how I hope to sell this book.

However it flies, the thing is not going on the trash-heap that is Amazon.

Selling your squibs on Amazon is fine as a hobby. That’s essentially what my little scribbles are — the FireRider series and the diet/cookbook thing and the various other stuff. Taken together, they generate about $5 a month. When the weather’s  good. But pretend as much as you would like that you’re “in business” to sell the stuff: it’s still self-published. You can’t get a newspaper or magazine to review it for love nor money, nor do you have much chance of persuading a bookstore or a library to pick it up. And it certainly is not going to end up on some professor’s syllabus!

Another day has slipped by. I’m exhausted! Going to bed, before it starts to rain again…