Ugh. Doing this little climb every morning for the next eight days is going to be a challenge. Not because I can’t do it but because, as usual, I don’t wanna do it. 😀 And because as also usual there are a zillion other things I’d rather be doing. Loafing, for example.

Got a late start yesterday, having foolishly turned on the computer to check email and take a “quick” look at the Internet: always a mistake. By the time I got out of the house, the sun was fully risen, rush-hour traffic was in progress, and I could not find a place to park at the trailhead. So to my intense annoyance I had to turn around, head back down annoying 7th Street to the “Visitor Center,” which because of its entrance off a high-speed major thoroughfare is tricky to get into and tricky to get out of. A boondoggle of recent construction, this fine facility at least has enough parking, most days.

But it’s about 3/4 of a mile from the trailhead — maybe more than that, given that that the trail there winds a little. So that added about a mile and a half to the hike. Pile on the mini-heat wave we were supposed to have on Tuesday, and I was not a happy camperette.

I started out in hummingbird mode — hummingbirds being creatures given to constant rage — and continued pretty much in the same vein. That did not help my attitude about this project, which is, shall we say, jaundiced.

Women who hike for fitness like to bring a friend, and they like to yak. Apparently most women have no clue how far the female voice carries across the desert. Two women babbling at each other can be heard a good half-mile away.

Which might be OK if they had anything interesting to say. They don’t. Hiking, slenderizing women talk about three subjects and only three subjects: their diets, their friends (or roommates), and the office. That’s it. Apparently they think of nothing else. So not only is the chatter of their voices annoying, the fact that they have fuckin’ nothing to say is equally irritating.

Then we have the manners characteristic of the hordes that run up and down the Phoenix Mountains.

You know… A hiker coming downhill customarily has the right of way on a trail. This is because momentum makes it harder for a person walking downhill to stop, especially if — as in the Phoenix Mountain parks — the trails are rocky and littered with roller-bearing stones. If you meet someone coming down as you’re going up a narrow trail, you’re supposed to step to one side to let that person get by. The reason is obvious, if you have ever walked either up or down a rocky mountain trail.

But bear in mind that the trail in question is not narrow. It’s a good fifteen or twenty feet wide — it used to be a road for automobiles, and still bears some of the asphalt laid, decades ago, for that purpose.

The  broad thoroughfare that goes all the way up Shaw Butte is so heavily thumped with daily hiking and mountain-bike traffic that there are two traces cleared of roller-bearing scree all the way from the trailhead to the top. In many places, there are three of them. So, if you see someone coming down at you or if you come up behind someone walking slower than you’re going, the logical (polite…) thing to do is to step one or two paces to the left or the right and go around them on the adjacent trace.

But that’s not what these bitches do.

They come up behind you, yakking blithely all the way, and they tailgate you! They come right up your ass and tromp along at your heels. So you have to step aside, stop, and let them pass.

Or, if they see you coming downhill and they’re climbing up below you, they step into the trace you’re using and dare you to keep walking.

You understand: there’s no point in this. With two and sometimes three traces of beaten path — relatively free of loose stones and small outcroppings — there’s no reason to insist on getting in someone else’s way.

Yesterday morning, I took one pair of them up on the dare. Admittedly, one of them was a guy. But he also was an airhead. These trails are populated with airheads. Believe me.

So I’m headed downhill on one of two parallel traces on this wide trail. This guy and his woman are coming up. I see them. They see me. It is obvious that they see me, from a fair distance away. So they march into the trace that I’m coming down on and proceed uphill straight at me.

I think, f*ck you, and just keep on walking.

We are practically bellybutton-to-bellybutton before the oaf steps aside.

Meanwhile, because I’ve made a late start, the sun is well up over the nearby mountains, and so it quickly gets passing warm on the trail. Fortunately I’ve brought plenty of water and dressed in layers. But that notwithstanding, by the time I got about 2/3 of the way to the top, I was damned hot.

I do not like being damned hot. That is why I usually have enough sense to leave the house before sunrise…

Then we have the view. The trail up North Mountain is best described in one word: boring. It is a boring trail devoid of most wildlife, which has been scared off by the hordes of device-connected, “music”-jangling, yammering humanity. The view off the side of the trail is just plain ugly.

Phoenix sprawls to the north — way to the north now — of the Mountain Preserves. What spreads out below you is mile on mile on mile of elbow-to-elbow ticky-tacky developments, commercial strips, and industrial slum. A huge high school looms in the near distance: it looks exactly like a prison. Even on a clear, relatively low-smog day, it is a dreary view.

Just below the top, I paused to swig a swallow of water. An older man also paused on the point and said hello. I said I sure was glad I was born 50 years too soon to go to a school that looks like a jail. He laughed and said, “Me, too!”

So I need to find some other hiking venues. This morning I probably will go to the flats behind North Mountain. Absent the rather precarious climb I’ve described before, the area really doesn’t have a good place to trot up and down hills. But you can walk from Peoria Ave. to Thunderbird, which is about 1.8 miles. Trails allow for a wandering path, and two of them will take you up low rises. So if a person walks at a fast clip, she presumably can get at least a little bit of a workout. Better than sitting in front of a computer, anyway.

Today I have to meet some friends for lunch at 11:30, so will need to get in some pass at exercising and still have time to get home, get cleaned up, paint my face, and get dressed. Since I didn’t get home from yesterday’s junket until almost 10 a.m., I need to go someplace closer, easier to park, and faster to walk. 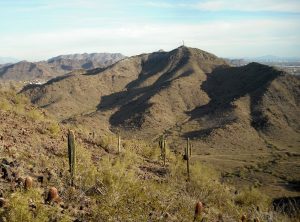 1 thought on “Up the Hill Again…and back”