Hm. I see I forgot to report on what happened with the Nest thermostat.

After M’hijito’s installation caused it to blow icy air when set at 70 degrees, I checked at the Nest website and found a list of technicians certified to work on the gadget. Thence to Angie’s List, to check the credentials of the three outfits closest to my house. All of them had “A” ratings, suggesting the Nest people are screening applicants for their technician training. I hired the outfit that had the most reviews, upping the probability that a fair number of the “A” ratings were written by real customers, not by the owner’s in-laws, cousins, aunts, and uncles.

In due course a fellow showed up. He determined that one wire was attached to the wrong connection. Turned it on. Blew cold air. After some more fiddling and telephone discussion about the thing’s inner workings, he concluded that the fault was not in our thermostat (dear Brutus), but in our HVAC unit. Up the ladder, down the ladder: he must have climbed up to the roof a dozen times trying to get the machine to talk to the thermostat. Failing this, he did some exploratory surgery. And lo!

The motherboard that directs the machine’s operation was fried. Brown singe all over it.

He came down and said he thought it probably had suffered in a brownout. And yea verily, we have had several brownouts over the past year. Also yea, that thing has never worked the way the old unit worked. I’ve been quietly regretting having bought the Goodman unit ever since it was installed.

Now he runs up to the Goodman wholesaler, purchases a motherboard, returns, mounts the roof again, and installs the part. Climbs back to earth, turns on the thermostat…voilà! Works like a charm! The loveliest, warmest air of the entire winter season flows in through the vents. He tested the air-conditioning function, and the thing breathed out a certifiable Blue Norther.

He spent a good three hours on these adventures.

Free. Labor and parts are covered by the Goodman warranty.

The $112 bill for installation posted at the Nest site? $80. Angie’s List coupon.

I really, really need a guy to do the twice-annual maintenance on the unit. I disliked the outfit that installed it and so haven’t called them back. Was very unhappy with the outfit that bought my old favorite AC company when the recession ran it out of business. So have had no one to do the work. Asked him about a contract. They want $200 for an annual contract, but if I would sign up on the spot, they would drop the price to $180 and throw in the thermostat installation and the three hours of work the guy just did!

So. Now I’ve got a new AC company. The unit is working better than it ever has. It no longer has to labor interminably to bring the ambient temperature to the thermostat setting, because it’s not intermittently blowing frigid air into the house. It’s not cycling on and off all the time, either.

Last summer—the first summer with this new unit, after the insurance company replaced it following the hail damage—my power bill went through the roof. Since the unit is supposed to be ultra-efficient, supposedly far outstrips the defunct 20-year-old Goettl unit, I was a little shocked at the electric bills, but I put it down to a rate increase and a string of extreme-heat days. But now I wonder. I suspect it has never run right. If that’s correct and this is the first time it’s operating the way it’s supposed to, we may see lower bills next summer. It’ll be interesting to compare 2011’s summer electric statements with 2012’s.

Everyone has laughed and hooted at the extravagant price tag of this doodad. But if the present transaction led to repair of a part that wasn’t working right from the outset, maybe over time the thing will do more than look pretty and act kewl. Maybe it will actually save a few dollars.

You get what you pay for, maybe? 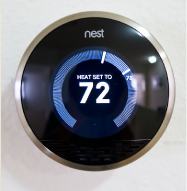 2 thoughts on “Update on the Nest”