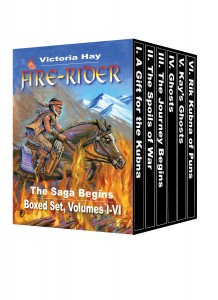 A collection of shorter works is called a “Boxed Set” in Amazonese. Isn’t that…annoyingly virtually cute? WhatEVER. We just put our first one out, and it looks pretty good. It collects the first six books of Fire-Rider, from the time our hero Kaybrel comes into possession of the captive Tavio to the time the traveling war bands decide which way to go next after leveling an enemy city. Along the way, we meet some colorful characters, learn what drives the warriors’ thirst for blood, examine Kay’s misgivings, and nearly get into a fist-fight.

The first three books have received five-star reviews. Apparently lowering the price to 99 cents causes people to buy it. Must mellow them out, too, which would explain the nice things they’ve had to say. 😉

Fire-Rider REALLY NEEDS those reviews. At $3.99, the set of six books is two bucks less than you’d pay if all six were priced at 99 cents, the lowest figure Amazon will allow me to post. It’s five dollars less than the present total cost of the six books, combined.

So, dear readers (♥♥♥♥), would you please, pretty please with sugar on top go to Amazon and get your copy of The Saga Begins? And then especially please with ice cream and chocolate sauce review the gilded prize at Amazon?