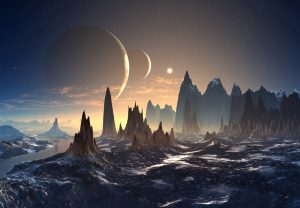 No. Not in Kansas. We now live on Dystopia 3, a world whirling around some iridescent monstrosity of a distant star. Two sure signs:

1. The neighbor’s new cat…  Other Daughter, the airheaded and evidently mentally ill creature who had the misfortune to be born to the Perp, is a bit of a Cat Lady. Given half a chance, she’d collect enough to fill the San Diego Zoo. Apparently her father, who owns the house down the street where she lives, keeps a rein on that. But still. She gets cats. And she lets them roam loose to depredate all over the ‘Hood.

Her latest treasure is a huge black thing that’s at least as large as Ruby, probably larger. Ruby weighs 21 pounds.

This cat has discovered the flock of doves I like to feed in the mornings, and it has NO PROBLEM climbing over the cat barrier I’ve strapped to the cinderblocks to keep Other Daughter’s little pets out. This morning it killed two of them.

Ruby spotted the f&cker and went after it, but it just ghosted away over the wall.

So now I’ve got to find a way to deal with this stupid woman’s pet predator.

I think there are two possibilities.

One is to quietly sprinkle dog kibble around the alley. This will feed the feline predator, but it also will attract coyotes. The coyotes will take care of MegaCat in due course.

Unfortunately, because the two old horse properties where the coyotes used to den have been sold and bulldozed for McMansions, the coyotes have moved on. I haven’t seen one in quite awhile. So frankly, I’m afraid the dog food trick won’t do much other than make the cat fatter.

The other possibility is to trap the damn cat.

Because he Humane Society and the pound do not want any MORE cats, to discourage people from turning in stray cats, they now charge a stiff tariff for the privilege. So your choices are to kill the cat or to take it a very long way from your place and let it go. I’m thinking the latter is about to be this beast’s fate. If I drive it to Scottsdale and let it go in the flood control wash, it’ll have a lovely place to live with lots of hideaways to get out of the rain, and the place is overrun with gophers and mice and roof rats out there. Cat will be a happy cat. And a gone cat, from our point of view.

Of course, the problem with Cat Ladies is that as soon as you get rid on one of their little companions, they bring in two more.

Most cats are discouraged by the cat barrier, though. This one is not, but maybe her next prize will be.

2. The brain-banging new phone… Today I worked up my nerve to try to install the new Panasonic phones. Alas, “try” is the operative word. 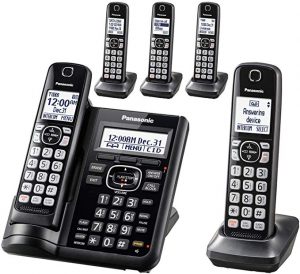 The goddamn thing is so complicated that its little instruction booklet is A HUNDRED AND TEN PAGES LONG!!!!! And it appears to have been written in Middle Martian, replete with weird little symbols that signify something, if only you could figure out what the hell the “something” is.

So now the decrepit Uniden is plugged back in. And I have no idea what I’m going to do. I simply have no way of figuring out how to get this thing to work.

My son just called and said he’ll come over — not tonight, obviously, but in the near future — and try to set it up. I’ve also called the pool guy, who said he’d put one in like it just a few days ago…but he has the flu and certainly is in no shape to run back out after a full day of work and fart with an electronic Rubik’s cube.

If I can’t get this thing installed…well… I guess I just won’t have a phone.

I mean, a real phone. I’ll have a couple of little flip phones to use for emergencies, but my business & home phone will just…go away.

Here we are in the first third of the 21st century, and we can’t even have a simple desk phone. And seriously: in 2020 I may find myself without a home phone.

Can I say how much I hate that? Why are we putting up with this sh!t?

1 thought on “We’re Not in Kansas Anymore…are we?”