Ever ask yourself those questions? Arrrhhhghhh!

Question # 1: Heaven help us, what are you smoking?

So this afternoon I’m  banging around the house as fast as I can bang, trying to catch up with all the chores that didn’t get done while I was traipsing back and forth across the Valley (40 minutes each way, 80 minutes round trip, two endless drives in exactly opposite directions, once to the Mayo and once back to the dermatologist in the wild) and flying through 31 pages of Chinglish academic language on an impossible deadline and on and on and unfuckinbelievably on trying to fix things that broke while all the medico-swimming pool BS was going on and trying to catch up with all the financial and household and… and the phone rings.

It’s Jim the Superannuated Pool Dude, the one who didn’t fix things and who got sent on his way when I called Swimming Pool Service & Repair to come drain the pool, power-wash every part of it inside and out with chlorine, refill it, and recharge the chemicals.

The pool, BTW, is beyond gorgeous today. Like…wow. Like this… 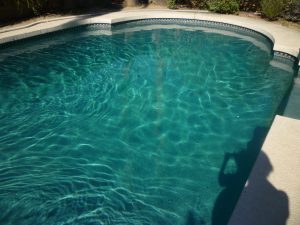 As opposed to this… 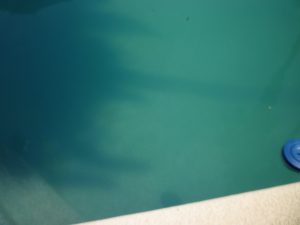 How much stabilizer did they put in?

Huh??? How the Hell would I know? I was batting from pillar to post across the city while the guy was spending his time wrestling with the damn thing.

Well, how much water does the pool hold?

He should’ve put in 18 pounds. A pound per thousand gallons. Is that how much he put in?

Whaaaat?????? I wouldn’t know, Jim. I had other things to do than stand over the man’s shoulder and watch his every move.

Jim persists: I’ll come by at 6 tomorrow morning to test it. If they didn’t put in enough it’ll turn green again right away.

Get off the phone, think about this, call Swimming Pool Service & Repair. Get ahold of Ashley, who gets ahold of Aaron, who says he put in four pounds, which is the amount you’re supposed to put in, and if this guy dumps another 14 pounds in there it will trash the chemical balance.

Who do I believe?

Back on the phone to Jim, telling his answering machine that I believe I’ll wait on the added stabilizer, thankyouverymuch. So tomorrow morning he’d better not show up.

And what is he smoking? According to the people who have a vested interest in selling you the stuff, you should add 4 pounds of stabilizer per 10,000 gallons, so that would be about six or seven pounds for the particular hole in the ground into which to pour money that dwells in my backyard. However, the pool tabs I use to dispense chlorine also contain cyanuric acid (which is what stabilizer is), and so you’re better off to go a little light on dumping the stuff in, because (especially in this heat) if you apply too much, it will tie up the chlorine and you’ll get, yea verily, green water.

How do I get rid of the superannuated pool dude? Well, I’d like to be kind to him, because he’s been nice to me and seems like a sweet (if eccentric) old fella. Just as soon not tell him to get lost, but I suppose if I have to, I will… Called him, reached his recorded yakathon, told him I would be out at 6:00 tomorrow morning, and there’s no need to add more CYA to the pool.

Will that get rid of him?

And in the “Get Lost” Department, how do I tell the Mayo Clinic never to let one of their quacks come anywhere near me again?

Holy Sh!t. So I traipse way to hell and gone out there, halfway to Payson from my house, to get a second opinion on the lesion on my left hand, which still hurts and which doesn’t exactly seem to be what you’d call healing up properly.

I want to know if this thing has been treated correctly, and if so, how long can I expect it will take before it heals fully, and one way or another what’s with the burning pain that courses from the wrist to the elbow and hurts so much it wakes me out of a sound sleep in the wee hours of the morning, and should I use the fluorouracil the dermatologist in the wild prescribed (which is going to fuck up the skin on my hand and possibly do permanent damage) or can I safely wait a while to see if any more lesions appear there?

So first thing they do is sit me in an examining room and send in a resident. I am to be this kid’s teaching moment. First thing she does is demonstrate that she has no clue how to take an accurate blood pressure measure. Then she asks me a lot of questions, which I answer quietly and patiently.

She goes off and I’m left sitting and staring into space for about 20 minutes, until Her Nibs shows up.

When the actual fully accredited medical doctor enters, I hand over the printout of the biopsy showing the abnormal results, repeat what I’ve already said once about the present state of the ailment, describe what has been done and what has been recommended, explain my reluctance to use the topical drug, and ask if it would be ill-advised to wait a while to see what happens before slathering the stuff on my hand.

Finally at one point she says, “You seem anxious. Are you feeling anxious?”

WHAT? What DOES that have to do with the price of beans or the state of the lesion on my sweaty little paw?

I think and almost say (but no, do not: my mother didn’t raise me in a barn, after all) damn right I’m anxious, bitch! I came in here with three specific questions — is this thing healing up properly, why does my arm feel like I dipped it in a vat of sulfuric acid, and can I safely delay using a skin-scorching chemical on my hand until we see whether in fact any more of these things comes up — and you have not answered a one of them!

From the “are you anxious” she goes on to ask me if I’m considering committing suicide!!!!!

I’m going to kill myself because I have a 2-millimeter sore on my hand? WTF?

During all of this roundabout, wacko palaver, she parts with one (count it, 1) bit of useful information: about the fluorouracil she remarks (these are her words): “We don’t usually use it unless there are a lot of lesions in an area — like 15.”

Fifteen? I’ve had two in this spot, the back of my hand. All told, over the past four to six months, Dermatologist in the Wild has removed four from distant spots all over my body, none of them clustered together.

“So,” I ask, “you’re saying that it’s not necessary to use this stuff at this time?”

“That’s your decision,” she says.

She was, it must be allowed, an extraordinarily beautiful woman. Indeed, one of the two most beautiful human beings I’ve ever seen. Can you get through medical school by dint of pure, unalloyed gorgeousness?

By the time I got down to my car in the basement parking garage, I’d gone from annoyed to fuming. And by the time I’d driven my car from the Mayo Clinic on the east side of Scottsdale to my house perched on the tracks, I’d gone from a low simmer to a full boil. What a total waste of my time…and to add insult to injury, this supposed dermatologist tries to do an amateur job of psychoanalysis on me?

This episode occurred 11 days ago.

Yesterday I got in to see Dermatologist in the Wild, almost as far on the west side as the Mayo is on the east side.

By now I’m using a certain magical mystery elixir on this thing — some fine CBD cream a friend brought over as a house gift. She handed it to me and, without even thinking, I slapped a dab on the sore thing, and…holy sh!t, the pain stopped right then!

Yeah. So I’ve kept on slathering it on — happened to have another jar of the stuff in the house. And it is starting to feel much, MUCH better.

Or else I’m just feeling no pain, though we’re told this stuff can’t soak through your hide and make you high.

Westside Dermatologist (a.k.a. Dermatologist in the Wild) looks at the spot on the paw, the one I’ve been slathering with the magical mystery cream, which I have carefully washed off before surfacing in her precincts.

So she gets out her speculum and peers at the damn thing and she says…. “This is AMAZING.”

“I can’t believe this!” she enthuses. “It’s perfectly healed up! It looks great!”

Heh heh heh…naturally I failed to mention the presence of the quack nostrum to her.  But the instant I got home, I ordered up a four-ounce jar of the cream from some outfit called Eden’s Herbals.  Amazon doesn’t seem to carry it, but this place does, & the sales pitch looks almost credible.

At Amazon I found the heavy-duty sunscreen the dermatologist’s office recommends, at significantly less than said derm is peddling it for. Ordered up a bottle of that stuff, too. 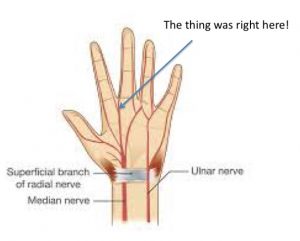 Derm in the Wild said, when asked, that the burning pain up the right arm was not related to the lesion, but is probably some kind of neuritis. She suggested I ask my GP about it. I said well I have a checkup scheduled in October. She said fine. I asked if it would be reasonable to hold off applying the flesh-eating fluorouracil until we see if any more lesions appear on the back of the hand. Good plan, said she. She sprayed freezing nitrogen on two new lesions that have surfaced in other widely separated spots and explained, when asked, that all these things are popping up seemingly at once because I’m getting old and 74 years of sun exposure are catching up with me.

Little does she know I probably won’t ask her about a mosquito bite after this. But when I see Young Dr. Kildare, who’s scheduled in the near future, I’ll specifically  ask him about the arm pain. And…mercifully…YDK’s most sterling quality (besides his spectacular cuteness) is…are you ready? Common Sense.

I’m dead certain the pain has to do with our little surgical procedure, because placing an ice pack on the (ex-) lesion quickly makes the burning sensation go away. And because the lesion was located almost on top of where a nerve proceeds from your index & second finger, across the back of your hand, and up your arm…right where the pain goes. My guess is that while we were shaving off flesh to biopsy or while we were freezing off the lesion, we must have dinged a nerve or two. Whether it will ever heal remains to be seen.

So I’d better get used to going to bed early, in order to get in seven hours of sleep before this thing’s alarm clock goes off at 3:00 a.m.

Either that or commit suicide, hm? Take a flying leap off the North Rim…with an ice pack tied to my paw? 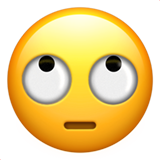