Commenting on the post about the costs and benefits of joining a fitness club, TB of Blue Collar Workman remarked humorously that maybe I could become a blue-collar worker, which certainly would run the fat off quick enough.

Actually, on all those dead-end mornings during all those dead-end years of driving through the concrete ditch between here and the Great Desert University, I used to daydream about how I wished I could make a living with some light craft. No, not like what TB does—I’m not and never have been up for hauling busted trees and repairing busted plumbing. What I’d really like to do is make something beautiful—jewelry, maybe—that people would buy.

Preferably for a fair amount of cash. 😉

Therein lies the difference between teaching and working on a magazine’s staff. Both are underpaid jobs. But with publication work, you end up with a physical product that you can hold in your hand and say, I made that. With teaching, you rarely have anything to show for your work. Occasionally a student will resurface, years after you’ve forgotten the person’s name, and tell you how brilliant you were and how you changed her life. But usually they don’t…usually there’s no feedback at all. Just hard work with little reward and less pay.

At any rate, TB’s remark brought to mind how much I would love to go to one of the “Customer in Residence” workshops at the Thos. Moser factory, where they build beautiful, zen-like pieces of hand-crafted furniture. Much like the furniture prices, the cost for a workshop is outrageous,  ($3,500 for one person, plus the bracing retail price of whatever you build), but you get to spend a week learning how to make those beautiful and functional objects.

Wouldn’t it be awesome to have a (highly marketable) craft that you could do out of a studio or workshop on your property nestled in some staggeringly beautiful rural location?

I covet Thos. Moser furniture. Can’t afford it, but covet it dearly. Right now I crave a Newport chair to replace my threadbare office chair. How beautiful is this?

Hm. Where to come up with $975 plus another two or three hundred bucks to ship it… Maybe I could kidnap one of the neighbors?

Of course, it’s not very practical in an office. I roll around from computer table to file drawers to bookcase and back, all day  long. Interestingly, Moser has an office chair version of that little beauty: 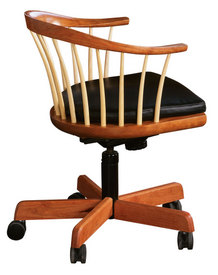 Even if I could afford the modest $1,625 price, to my mind the caster arrangement really uglies it up. So does the black seatpad, which will set you back another $150.

Oh well. Too late now. Too late ever to buy a gorgeous Thos. Moser chair. Too late to master a craft and build it into a paying enterprise.

What’s Going On in the Rest of the World?

Want to start a business? Lazy Man and Money has an incredible round-up of resources, including a link to something called Kickstarter, best described as crowd-sourced patronage.

Just when you think your costs are blinding, you learn what it costs to live somewhere else. Faced with astonishing homeowner’s insurance bills and annoying exclusions, Planting Our Pennies decides to self-insure an exterior structure vulnerable to storm damage.

Donna Freedman has been junketing in New York, and as she often does, posting entertaining despatches at Surviving and Thriving. This woman would make a great foreign correspondent…

Hmmmm…. Did you know Budgeting in the Fun Stuff has a bunch of co-owned sites as part of the Blogging Empire? Interesting. Check them out at her weekly round-up, and while you’re there, don’t forget to buy her book.

Nicole&Maggie prepare for the blessed event by cooking up interview questions for the proposed new mother’s helper.  Heh heh heh…one of the charms of old age is being able to say, “Ahhh…I’ll never have to do that again!” 😀

Abigail at I Pick Up Pennies plans a fun birthday celebration, largely financed by Groupon.

At Money Beagle, the Beagle couple have a cleaning frenzy. Wow! Would that I had so much energy. And of course, would that the temperature in the garage were somewhat lower than 110 degrees…

Looks like all that junk food populating the largest part of our supermarket shelves is about to get a lot more expensive as the price of high-fructose corn syrup rises. 101 Centavos entertainingly contemplates the (dis)glories of speculating in corn.

Revanche and PiC took an excursion to Half-Moon Bay. So, so lovely and relaxing. Wonder if the proceeds from kidnapping a neighbor would set me up in business there after the working vacation at the Thos. Moser factory….

Frugal Scholar urges shopping at stores that stand behind their products with unconditional guarantees to accept returns.

At Blue Collar Workman, what goes around comes around. Gratifyingly.

Down under in Auckland, eemusings asks readers to share their first job stories.

Welp, it’s time for me to have my first breakfast of the day. And so…to the kitchen. Happy weekend everyone!