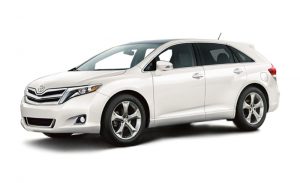 Oh, hell: make that “Why I Hate the 21st Century.” ’Cause I do: I hate almost everything about it, especially

Day before yesterday when I went to get into the car, I forgot I had the cell phone I’ve taken to carrying around the house — so as to call for help if I fall or otherwise get into some kind of old-bat trouble — not only in my pocket but turned on.

A live phone, it develops, is a live bomb when it comes to the Toyota Venza’s goddamned “audio” system. Climbing into the car caused the radio to shut off and the screen thing that sorta operates it to switch to “AUDIO.”

Whatever “audio” does, it doesn’t play music. Apparently it wanted me to talk on the phone.

I did not want to talk on the phone with it. I just wanted it to fuckin’ GO AWAY.

Nothing — and I do mean nothing — that I tried would make AUDIO go away. This wrestling match, we might note, was going on while my car was rolling down the road. I punched every button I could think of, but of course many of the “buttons” are not on the dashboard but instead appear as images on the goddamned screen if and when you punch the right (or wrong) combination of…somethingorother.

Believe it or not, I can manage all those things without a car tutoring me. I know how to read a map. The only reason I carry a nuisance cell phone is because there are no pay phones anymore. Well…except insofar as the goddamn cell phone makes you pay for minutes and minutes and minutes that you’ll never use, lest ye be stranded by the side of a freeway 60 miles from home with no help in sight. All I want a car radio to do is PLAY WHATEVER THE GODDAMNED RADIO STATION IS BROADCASTING.

How hard is this?

For the nonce, I give up, by way of navigating Phoenix’s homicidal traffic without killing myself or any of my fellow crazies.

A couple of more efforts to fix it, after I reached a parking lot and later after I got the car back in its garage, failed. Ignominiously.

I now realize I’ll have to dig out the instructions from the THREE VOLUMES of driver’s manual…but later, please. Much later.

This morning I recall this annoyance, whilst bathing and getting dressed to go out. I think…maybe I should go by the Toyota place and ask them to put it back on “RADIO,” thereby giving me a chance to bellyache at the Toyota people. This, I realize, is an exercise in futility: discard that idea. Chuck the Wonder Mechanic’s place is just around the corner from the Toyota place: I could go by there and of course any of the young pups will know, instantly, how to work the damn thing.

That seems unduly lazy to me, though. Also it will make me look like an idiot…probably not an unfair characterization, but still…why advertise it?

I decide instead to shuffle through the owner’s manual’s voluminous index and try to figure out how to switch the accursed thing back to RADIO.

Those three volumes that make up the Venza owner’s manual? ONE WHOLE VOLUME is dedicated to the complicated whack-shit audio system! Yes. TWO HUNDRED AND THIRTY-TWO PAGES on how to use “AUDIO.”

For the love of God. All I want to do is listen to my cowboys crooning down from Wickenburg on the FM airwaves. Do I really have to paw through 232 pages of technobabble to accomplish that?

So after some difficulty I find the section explaining how to turn on the radio — which apparently is not what the system is designed to be used for — and discover the trick involves pressing a virtual button several ways from Sunday and then pressing some more choices that supposedly will pop up to get to a point where the thing will receive ordinary FM stations.

Honest to gawd, I wish I’d kept that Sienna and taken my chances with the alternator. Yes, waiting for the insurance company’s Roadside Disservice for five hours was exceptionally unacceptable. But…if I’d signed up for AAA — which I need to do anyway, obviously — and ponied up the cash for another unreliably rebuilt second-hand alternator, it would have cost one helluva lot less than the present endlessly annoying jalopy cost.

The damn thing is emblematic of all I hate about the 21st century and its digitization: a fair number of things — maybe most things — worked better in their analog formats.

No one should need 232 pages of instructions to turn on a fuckin’ radio.