So we’re sittin’ around here, contemplating the mysteries of Life, the Universe, and All That, when one of the greatest of mysteries impinges upon our consciousness: Why are vast tribes of people hoarding toilet paper, in the expectation of a (usually rather mild) disease that is unlikely to cause diarrhea? Even with with quarantining a given (which it was not when the toilet paper mania began), what is the fixation on TP? 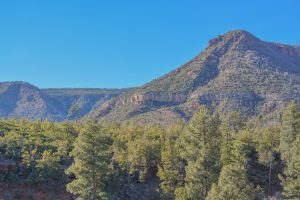 Among the American affluent classes, and the somewhat moneyed middle classes, everybody and his little brother, sister, aunt & uncle has a vacation home in the boondocks: In Arizona, for example, that would mean forest and desert retreats like Pinetop, Payson, Strawberry, Prescott, Yarnell, the North Rim, the White Mountains, Bisbee, Patagonia, and many waypoints north to south, east to west. Most of these second homes are furnished for weekends; some for a month or two of full-time residence during the summer. But by and large they stand vacant and waiting.

So. If you could see Armageddon coming — in the form of a contagious disease that was likely to get you and your family confined to your home for several weeks — where would you rather be held captive? In a plaster and styrofoam hut in a jam-packed eave-to-eave suburb? Or in a glorified “cabin” (more like resort quarters) on three acres of forest or scenic grassland?

If we still had the ranch up on the Rim outside of Yarnell, that’s where I’d be right now.

And what are you gonna do if you figure the kids are going to be shut out of school, you’re probably going to be told to work from home (or be laid off), and all of you are going to be locked up together for anywhere from two weeks to three months?

What you are gonna do is load the kids and the dog into the vehicle, turn on the burglar alarm, lock up the shack in the Valley of the We-Do-Mean Sun,  and drive up to your vacation cabin. That’s what you’re gonna do.

And if you’re going to hole up for some period up to, say, 90 days with your three kids, the family dog, the cat, and two sets of in-laws, what are you gonna need, in addition to food? That’s right: 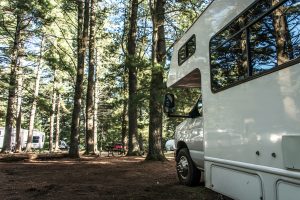 Nor would you need an expensive, maintenance-sucking second home to feel the impulse to stock up with necessaries. Many people in our parts have campers — either pickup shells that convert your Ford F-150 into a rolling hunter’s cabin or fancy living-rooms on wheels of various sizes, some as capacious as a small house. What would you bring with you if you figured you were going to be living out of your car or camper for anywhere from three weeks to three months?

Even if you don’t have a vehicle tricked out to accommodate the Life of Riley, plain old camping is just not that hard — even over the long term. SDXB and I did it for three straight months, trekking through the outback of Alaska and Canada. With a camp tent, a propane campstove, a few dishes, and a couple of towels. We slept under a roof one (1) night, when it was raining too hard to cope.

We did it for fun, so trust me: it was no particular hardship.

But…if you weren’t an experienced long-haul camper but you figured you’d better be prepared to stay in the boondocks for a good long while, and you planned on car-camping rather than hiking, what provision (other than food) would you really, truly, NOT want to run out of?

heee! So this is the theory. People aren’t buying TP to stock their houses here in the Big City. They’re using it to stock vacation homes, campers, cars, duffle bags full of camping gear. They’re not stocking one home. They’re stocking two, or even maybe three, if they have a vacation house and a camper. 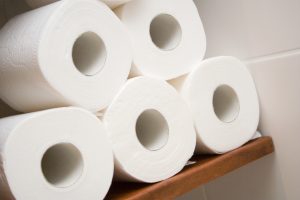 7 thoughts on “Why Toilet Paper? Well…here’s why”