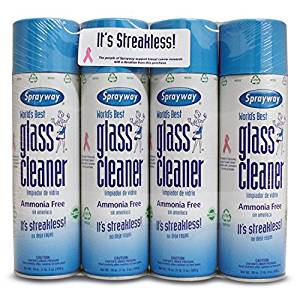 So Luz the Wonder Cleaning Lady, who has begged off coming ’round once a month, saying she wasn’t feeling well, her husband wasn’t well, and whatnot, called out of the blue and invited herself to come do battle with the Funny Farm.

This was good — very, very good — because even though I’ve tried to keep up with the chore-a-day strategy, truth to tell I’ve let it go somewhat and the place needed a serious deep cleaning.

And no one can deliver that better than Wonder Cleaning-Lady. The house is so clean it sings. The tiles feel like glass under one’s bare feet. And speaking of glass…you can see through the windows again. Isn’t that unique?

I think Luz does so much better with the windows than I do because she uses a commercial product. It looks like her theory that my DIY Windex knockoff doesn’t work as desired is…well…correct.

She brings a number of her own products. The window cleaner is something called “Sprayway.” I’ve never seen it…my guess is, it probably comes from a dollar store or maybe a Walmart. Here it is on Amazon…it seems to be pretty well liked by that august emporium’s buyers. Hmmm… one commenter says you can get it for a fraction of the price at Target. So…next time I’m there, I may look for it.

As for the floors? There’s no explanation other than that she can cast some sort of magical spell.

It looks like what’s happening Chez Wonder-Cleaning Lady is that she’s taken on more clients than she can handle without killing herself. She said that several of her customers have kids who graduated from high school last month and so threw big parties to celebrate. Apparently she was over at their respective houses helping to prepare for the shindigs and then back again cleaning up the mess.

In addition, she was trying to deal with a lot of other customers, her own kid who’s now out of school for the summer, and an ailing husband.

You also get the sense, in talking with her, that when she arrived in this country she probably didn’t realize how much demand there is for contract cleaning help from someone who actually can and will do the job right. Those cleaning services are terrible, to say nothing of ridiculously overpriced. So people who know how a house is supposed to be cleaned and what it’s supposed to look like after the job is done will try (often with much frustration…) to seek out single entrepreneurs who will contract to come to your house once every week or two or once a month. A woman who learned how to clean from her mother, who knew how to clean, will invariably do a better job and usually will cost less. Even though she’s worth far more than a slap-dash cleaning service… 😉

Luz’s English is much improved over what she had when she started here at the Farm. And, since she’s a very bright woman, I expect she’s wised up to what her services are worth. I’m surprised she hasn’t started a cleaning service of her own, hiring out some of these jobs to underlings. It would be tricky — many cleaning ladies are here illegally, and so it would be risky to employ them and difficult to pay them. Luz will take checks, which indicates that she’s legal enough to have a bank account. But many, like my would-be “intern,” need to be paid in cash. These days I usually pay her in cash, too, since she doesn’t come very often and since I suspect it’s easier for her not to have to dork around with depositing a check.  With those kinds of complications, she probably doesn’t want the hassle of having to hire and supervise underlings.

At any rate, I hope she stays in business for a long time. That lady is just the ticket!