Yesterday we spent the afternoon at La Maya’s house experimenting with a friend’s pasta machine. We had the idea that we wanted to actually make our own pasta (having been told that it’s much better than the dried stuff you get at the supermarket) and decorate it up with made-from-scratch sauce.

Even with everyone helping in the kitchen (or maybe especially with everyone helping!), we expected this to be a huge honking project. But it turns out that pasta is extremely easy to make, and you don’t actually need a machine to make simple shapes-a rolling pin and a sharp knife or pizza cutter will do the job. However, pasta machines are pretty inexpensive. Amazon.com has one for as little as $19. We think our friend’s cost around $150-it appears to be the $95 Atlas shown at Amazon-but on that same site the Imperia looks similar (except it doesn’t clamp to the countertop) looks very similar and sells for $64. If you like pasta and love to play with your food, one of these could be worth the investment.

La Maya found semolina flour in bulk at Sprouts. I scored some fresh tomatoes from M’Hijito’s backyard garden, and SDXB brought a creditable bottle of cheap red from Trader Joe’s. 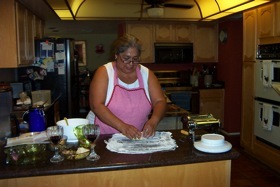 Plain, unembellished pasta consists of nothing more than eggs and flour with (sometimes) a little water added. Following instructions that came with the machine, we made ours by mounding up about a cup of flour, making a little well in the middle, and breaking a couple of whole eggs into the crater. Mix it together with a fork until it holds together and then gently knead it between the palms of your hands until it’s no longer sticky. If it sticks to your hands, add a little more flour and massage the stuff until it holds together like good Play-Doh.

If you’re going to run it through a pasta machine, you don’t want it to be gooey, ’cause it’ll stick to the machine’s little blades just as it sticks to your fingers. It should be fairly firm.

The machine has a roller that flattens the dough out. You can adjust a setting to make it come out quite thin or fairly thick. Not having a clue what we were doing, we went for a medium setting, so we had pieces of dough about 1/16 of an inch thick. These we put through a blade that disgorged fettucini-shaped strips. Once we figured out how to do it, the process was incredibly easy.

After we saw how this worked, we realized that you could just roll out the pasta on your countertop or breadboard to whatever thickness you like and then slice it into long, thin pieces with a sharp knife.

Tomatoes cook down into a wonderful, light sauce in a matter of minutes. La Maya had basil growing in the backyard; we could have used some Italian parsley instead of or in addition to fresh basil. We diced several tomatoes, cut up a small fistful of basil, and minced some garlic.

I started the sauce by stirring the minced garlic around in a little hot olive oil, briefly-don’t let it brown. Then added the tomato and basil and let them cook gently until they simmered into a nice sauce. While the tomatoes were cooking down, I added a splash of wine, and at the last minute we poured in a small amount of heavy cream. If you wanted, you could use orange juice, or you could combine a little grated orange or lemon zest with the tomatoes.

On the side, I sauteed some excellent prawns that I found at Costco, adding a little cumin for extra flavor.

While the sauce was cooking, we brought a large kettle of water to a rolling boil. To cook the pasta, all you have to do is drop the fresh noodles into boiling water and let’em cook for just a few minutes. As soon as they seemed to be getting just al dente (which is very fast), we lifted them out of the water and into the pan of hot sauce. Tossed them into the pan of sauce to finish cooking and to coat them with the delicious tomato mixture and then served them up.

The result was incredibly delicious! Also, to our surprise, even though we ate ourselves stupid none of us felt uncomfortably stuffed. The noodles expand while cooking and kind of “puff up” in a way that dried store-bought pasta does not. The result is an unexpectedly light dish, compared to what we normally expect of pasta.

The whole adventure was a lot of fun-good company, good eats-for not a lot of expense. This is a great way to enjoy yourself and stay frugal: have a cooking party with good friends.