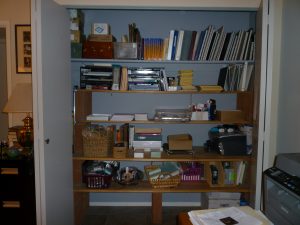 Hallelujah, brothers and sisters: I lived to tell the tale!

Today I took on what I believe will be the worst job of the Great Closet Clean-out Scheme: the office closet. Huge. Truly huge!

It took the entire afternoon to shovel that stuff out and put the surviving junk (some of which probably ought not to have survived) back together in a more or less sane way. Oh, look here: we have a before! 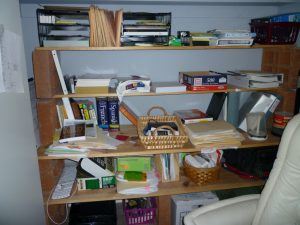 I think this is a perhaps a rather distant “before,” because it looks less chaotic than it did when approached this afternoon.

What an enormous amount of trash! Some of it, I have no idea what it was or why I have it. Electronics seem to spawn “stuff i think i’d better save” better, even, that jars of mayonnaise and mustard. Somewhere along the line, I fell into the habit of saving boxes that once held various electronic components, presumably because I imagine they will bear some important clue to the version or provenance of the doodad. So…there were all these boxes. Yes. empty boxes.

Most of those are gone now. I hauled six loads out to the garbage, one of which had to be rolled into the alley in a wheelbarrow.

But we still have two baskets full of cables, earphones, thingie-boggers, and pennywhistles, some of which I do not know what they are or what they’re for. I’m just afraid to throw them out because…who knows? One of them could be important!

There are modems and routers and keyboards and cameras and earphones and a call-blocker and boxes of CDs storing data for future generations. Old photos inherited from my parents. Piles of stationary and notecards. Two printers (one of them about to be donated). Cables and adapters and plugs and things. An old iMac and a dust-covered keyboard. File folders. User manuals (some dating back to 2004). Sheets of blank labels. Sheets of blank business cards. A box of plastic sign sleeves. Scotch tape. Hanging file folders. Regular file folders. Computer cleaning air spray. Bear spray. My father’s sextant. A row of self-published books. My dear friend’s manuscript memoir of her dying, which her daughters would not allow me to complete (as she asked) and send to a publisher. More yellow pads than one can count. And on and on and on and…

The shelves are still full, but at least they’re organized now. And the floor is clear (except for the packing box holding said memoir).

It’s 8:15. I am exhausted. Too early to go to bed…but don’t feel like sitting in front of a desk in a hard chair, passing the time on the big computer with games, gnus, and Facebook.

The Apple people called to report that the Macbook is ready to be picked up!

Well, you may be sure I’m not driving out to Dystopia East after church tomorrow: that place will be a zoo on a weekend afternoon. So it will be Monday morning before I can traipse out there and retrieve the thing. Hope it’s working properly now!

The ancient Mac will go to the store with me, staff there having offered to recycle it. It’s so old it contains no data that’s current enough for anyone to exploit. The unused Epson printer that came with some MacPurchase — stashed because I already had a much better printer — will be donated to the church office if they want it; otherwise to St. Vincent’s. A pile of obscure titles will go to the church book sale. Or St. Vincent’s, if it’s too early to foist books on the book-sale organizers.

Now only two closets remain to present a challenge: two sets of cabinets in the garage. I need to get to those very soon, before the weather starts to warm.

Then we’ll have only the bathroom and kitchen cleaning cabinets to shovel out, and the Great Closet Clean-out Project will be pretty much done.