Hallelujah: here’s a genuine personal finance post. Remember when this blog was a PF site? 😀 Today we’re doing “waste not, want not”: scratched-up knife department. (Notice how we got that SEO strategy in the first paragraph? Clumsy, but effective. I suppose. Thank you, dear Google, for your malign effect on our  writing style…)

This morning, while trying to track down a missing kitchen knife, I found myself mourning the state of all my (expensive!) cutlery, gouged up shamefully some years ago when I tried to sharpen them on my father’s old stone. They were all pretty much ruined by that effort, but I’ve never thrown them out because of course in retirement I can’t afford to replace nine Wüsthof and Sabatier kitchen knives, plus another four Sabatier steak knives.

Even if I could, that degree of waste would frost my cookies. 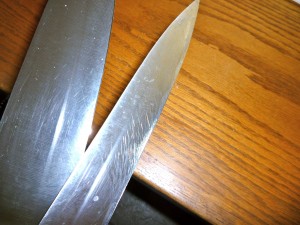 My father could put a razor edge on a knife. He taught  me how to do it. But apparently I didn’t learn well… Every blade that I tried to sharpen this way ended up gouged up with scratches. They still take a fine edge, but they look like the dickens.

Never did find the lost knife . But in the process of searching, it occurred to me to wonder if those scratches could be even partially polished off.

A Google search forthwith brought up this interesting post from an outfit called 100-Year Knives.

The guy suggests polishing a scratched-up blade much as you would sand a piece of furniture, going from coarse to fine grit paper. Then finish it off with a high-grade metal polish.

I could hear my father shimmering in his funeral urn at the mere thought of this scheme.

By way of experimenting, I took the 120 grit paper to a boning knife that I love but rarely use anymore. (You can, btw, save quite a lot of money on meat by purchasing large chunks of beef, pork, fish, or lamb, whole chickens, and whole turkeys and butchering them into the preferred cuts yourself.) That knife was very badly scratched. I didn’t take a shot of it before I tried my little test, but here’s how it looks now: 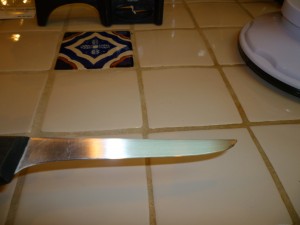 It ain’t perfect. But it’s a heckuva lot better than it was. Sorry about the glare — the camera won’t let me turn off the flash. Click on the image for a better view.

This knife was in worse shape than the chef’s knife and the utility knife shown above. A few scratches are still visible, but it’s much, much better than it was. It’s not polished to a high sheen, because I don’t have any real metal polish around the house — I used a little Barkeeper’s Helper, but I think some Simichrome or Flitz will do the job a lot better.

The result is good enough to convince me it’s worth dropping by the Ace and picking up a few more packages of sandpaper in the desired grades. And some metal polish. Even Brasso probably would help, but the kind of stuff guys use to polish the brightwork on their motorcycles is what you want. Simichrome is said to be available at your local Harley shop; or, if you must, from Amazon.

The process dulled the blade on the boning knife, which normally has an edge that exceeds “razor.” So I had to resharpen it. These days I’m using one of these manual sharpeners that resembles a blade-eating electric sharpener (never use an electric knife sharpener if you have a knife you’d like to keep around for a few years): 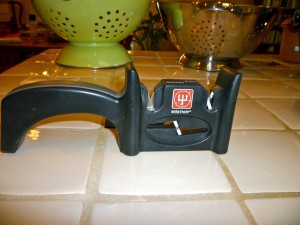 This thing puts a decent edge on your knife without eroding it into the shape of an ice pick and without scratching its sides. Mine is made by Wüsthof, but you can get them in different brands. Once you’ve sharpened the blade (left-hand slot), you hone it on a pair of ceramic sticks (right-hand side), et voila! I hone the kitchen knives after every use, and hardly ever have to do a serious sharpening job anymore. My knives all think tomatoes and raw pork are the same as room-temperature butter.

Take-away PF message: Never throw out something that you can fix.