🙂 I’d put money on it that I’m not the first to dream up that term, “microgardening.” And no, I’m not gunna google it to find out.

The various tiny gardens around the yard are springing to life, now that fall (Arizona’s second spring) is here. Not feeling excessively ambitious this year, I decided a) to plant things in pots, not the weed-prone ground; and b) to experiment with grocery-store gardening.

The latter entails sprouting new veggies from scraps left over in the kitchen. Check out this little guy, for example: 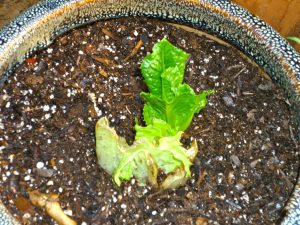 That is the stump end from a head of romaine lettuce. Turns out if you set it in about an inch of water for a few days and then plant it in dirt, it sprouts a whole new head of lettuce! It’s only been in the pot a few days, and it’s already put out a healthy-looking spray of deep-green leaves.

I planted another one in a different pot, only from a head of red leaf lettuce. It’s alive but not going to town like this one — possibly because it doesn’t get as much light?

We’re told, too that you can do this trick with little green onions: just plant the nipped-off root end in the dirt and watch it sprout. Okayyy…still watching: 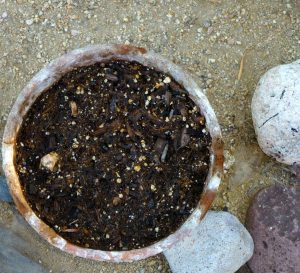 Moving on, I did condescend to buy and plant some chard seeds, a totally can’t-miss plant in these parts: 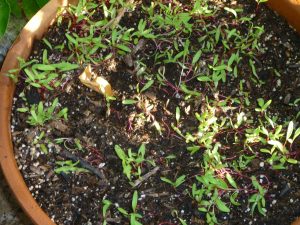 They’ve sprouted like crazy…and now need to be thinned, something I’ll have to get to today or tomorrow. Today a lot of work is on the plate, but I’m sure they won’t have crowded themselves into extinction by tomorrow. 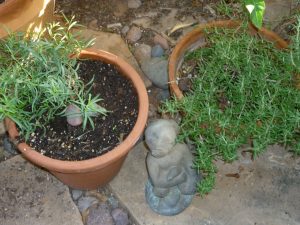 Also part of the fall microgarden are these two new additions to the herb collection: French tarragon on the left and rosemary on the left. They showed up this summer, have made it through the heat, and seem to be thriving.

This old standard has been growing for years — many, many years — in a kitschy pot from a locally owned nursery I used to patronize when I was employed but can no longer afford: 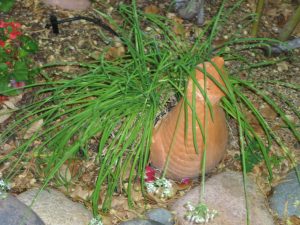 Apparently chives live forever and cannot be killed by neglect. I believe I brought that potful of chives over here from the old house…which would mean they’ve lived here for the past 12 years. Occasionally I add a little more dirt to the pot, to replace the soil that slowly rinses out through the bottom hole. Love chives.

The Thai basil and the regular basil also are in good shape, but they’ll die back when the weather cools. For the nonce, though, they’re great with tomatoes of any sort, cooked or  raw. 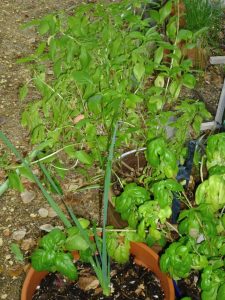 They also live in the shade and don’t seem to mind it. That thing that looks like an onion isn’t (I don’t think…). I believe it’s an iris or some such. Though why an iris would decide to sprout now escapes me. Sooner or later, I suppose, we’ll see.

The weather remains surprisingly warm. Yesterday — almost the end of October! — I was in the pool and it was wonderful. Crisp but not bone-jarring. Temps have been in the mid-90s and the sky generally clear. So I guess the combination of the warm air and the direct sunlight is keeping the water a little warmer than usual. This afternoon, if I can get quit of the most urgent computer-based work, I plan to jump in again, after overheating myself with some more pruning and digging.

Sometime within the next few days (today?), I need to soak the ground in the poolside flowerbed and extract the goddamned bermudagrass that took it over this summer. 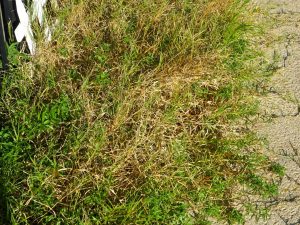 The evil weed has about been killed off from repeated applications of Over-the-Top, a grass killer, which I ordered from Amazon because it’s almost impossible to buy in these parts.

Unfortunately, it’s not its old self. The current product contains Sethoxydim, which only sorta works. The old Over-the -Top really, truly did work on grasses without taking out broad-leafed plants. But it’s no longer available…at least, not as Over-the-Top. The new product stinks something fierce: you really need to use disposable gloves when applying, so as not to get it on your hands. Yuch!

As it happened, a few days ago I decided to clean out the garage cabinets. And what should I find but a years-old squirt bottle of the original Over-the-Top! Instead of Sethoxydim, the original stuff contained fluazifop-p-butyl. Wondering if it still worked, I tried it on the still-vigorous, barely scathed bermudagrass. And LO! The old stuff WORKS! As in it really works: the bermudagrass promptly croaked over, leaving only the chore of yanking it out of the ground and freeing air and water resources for the surviving Mexican primrose.

You can still get fluazifop-p-butyl — apparently it’s not one of the effective products that have been taken out of consumers’ gummy little hands, after all. It’s in Ornamec 170 herbicide…also available on Amazon. A US Forest Service risk assessment of this chemical suggests the  risk to humans is fairly low; don’t spray it on food crops, don’t pour it in ponds, lakes, or streams, and don’t saturate the ground with it. Use it, literally, “over the top”: a little goes a long way.