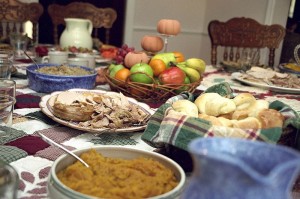 LOL! The elder generation in my family is now long “late.” But I can remember when our best friends Barbara and Larry used to get together with us in the days after the official holiday for a “Thank God Thanksgiving Is Over” celebration.

Barbara and I could cook — and I mean really cook. We were part of the generation of young professionals who became entranced by Julia Child and friends. Both of our mothers, the distaff side of a working-class generation, could put out a tasty and workpersonlike meal in the Joy of Cooking tradition. Barbara and I stood on their shoulders and engaged Julia Child.

So needless to say, the bland, sawdust-flavored turkey, the predictable mashed potatoes and beans, the gooey-sugary punkin pie were less than perfectly thrilling for us. By the same token, a swell-elegant Julia Child spread was equally lost on our relatives.

Nevertheless, we and our husbands would dutifully go to the November 25 family shindigs. And then as soon as the obsequies were done, it was THANK GOD THANKSGIVING IS OVER time. TGTGIO!

The following weekend, we would spend half the day in her kitchen or mine, cooking up some fantastic creation that actually had…you know…flavor.

Alas, those days are past. Our parents are dead and gone, as are mine and my father’s third wife and her daughter and grandson and son-in-law. (Those were folks who thought a saline-saturated Butterball turkey steamed half the day in a hot pot and served up with a Jell-O salad was delicious!) Barbara got mad at me for reasons I never have understood, and to this day refuses to speak to me. Besides, in the absence of Thanksgiving, of course, there can be no TGTGIO.

Of late, though, my son’s friends have developed a kind of substitute. The young people put on a big feast at one couple’s home, out in a North Phoenix suburb. It’s quite lovely! They invite all the aged relatives and a bunch of family friends. The kids are milling around merrily — by now, alas, they’re teenagers, but presumably in a few years they’ll be having their own TG dinners with their own little kids milling around. People bring stuff, creating a kind of potluck to complement the extraordinary turkey the young father cooks up in the brick oven he built in the backyard.

The company is good. The food is excellent. And unlike the traditional build-up to TGTGIO, it’s something to look forward to.