And waypoints…  Yesterday SDXB and NG wanted to take a day trip up to Wickenberg and then, via the back road through Yarnell, up to Prescott.

Well, given that SDXB had a whole slew of “sights” he wanted us to see, reaching Prescott was a forlorn hope. But we did make it up to Yarnell eventually.

We were waylaid at Wickenburg when we came across a place with two big arenas where people — mostly guys — were practicing calf-roping. Like LOTS of people. It seems to be the home of the National Team Ropers Tour.

And is it a hoot! An army of big, expensive horse trailers — some with living quarters, like RVs with attached stables (!) — were crowded into the huge parking lot. These people were working their horses and then, along about 10 a.m., they had a competition. Two riders would work together to lasso a calf. 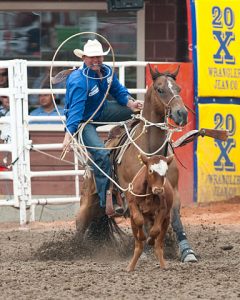 Don’t get excited, animal-lovers: the calves had these headpieces on to protect their noggins, and they were never yanked to the ground. About half the time, the little pistols got away.

No one seemed to object to our watching, so we stopped there for quite awhile to view the show. That is definitely something I’d go back to see.

SDXB wanted to explore Congress, a desolate wide spot in the road if ever there was one. So nothing would do but what we had to stop at one of the “antique” shops by the side of the road. In desert-rat lingo, the word “antique” means “junk.”

There in amongst the junk, we found a one-eyed man, a classic old Arizona codger if there ever was one, with a scraggly white beard and scraggly white hair and a blacked-out lens in his glasses and baggy old dirty jeans. Roger, his name was.

Roger, as it developed, is a master carpenter in the vernacular tradition. There in his workshop he had this HUGE table, in its finishing stages, built of old, recycled timber. Its legs were made from a thick viga, cut to size and measured carefully (and with what must have been considerable skill) to make the rustic top level. The top was easily three inches thick. How you would move it escapes me: presumably with a crane.

The thing was beautifully finished. Its untamed-looking grain, which from a distance looked like it must be rough to the touch, was perfectly smooth. The wood had two or three short cracks that he had either cut himself or had enhanced (don’t know which) and filled with chrysocolla, a copper mineral that resembles turquoise. These, with some difficulty, he had sanded smooth with the tabletop and edges. The effect was just stunning.

A copper mine executive had ordered it for his office. Roger was also making a backbar to match. The top, still in its early stages, was a good ten or twelve feet long. Roger said some file cabinets would go under it.

Holy  mackerel! What a phenomenon to find out in the middle of the godforsaken desert, sandwiched between a train line and a highway.

I didn’t get a photo because when we walked in there I’d left my purse and camera in the car, not expecting to find anything of interest. But SDXB got a few pix. Whenever he sends them over (he got mad at his carrier and canceled his Internet, so has to go to the library to email photos taken with an actual camera), I’ll post them.

This part of Arizona is crawling with eccentrics and their eccentricities. There’s not a lot to do in the middle of the desert, you understand. So one indulges one’s artistic impulses.

Never to be missed, for example, is the venerable Yarnell Frog. 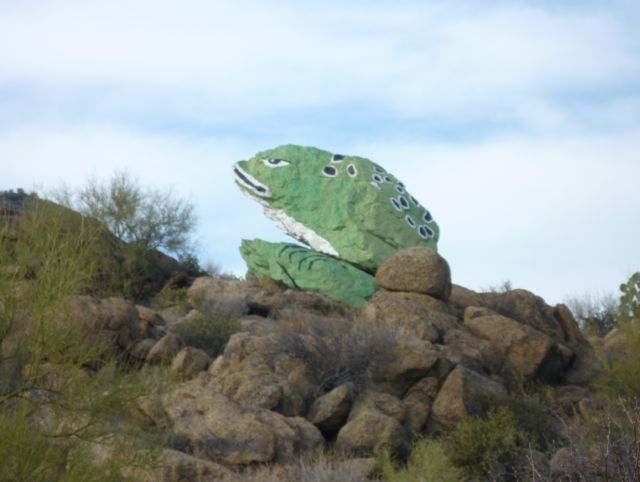 Folklore has it that this 60-ton boulder was painted by whimsical locals around 1928. It became such an attraction that people in Congress and Yarnell took to keeping it up. I’ve heard crews go out once a year to refresh the paint job.

That frog looks a lot crankier than it used to when I was driving up that hill to go to our ranch on the Kirkland Junction road. Back in the day, the frog was pretty mellow. Too many tourists will curdle your personality, I guess.

Boulder art is a local specialty, come to think of it. On the dirt road that parallels the train tracks up to Hillside and Baghdad, you come across this masterpiece: 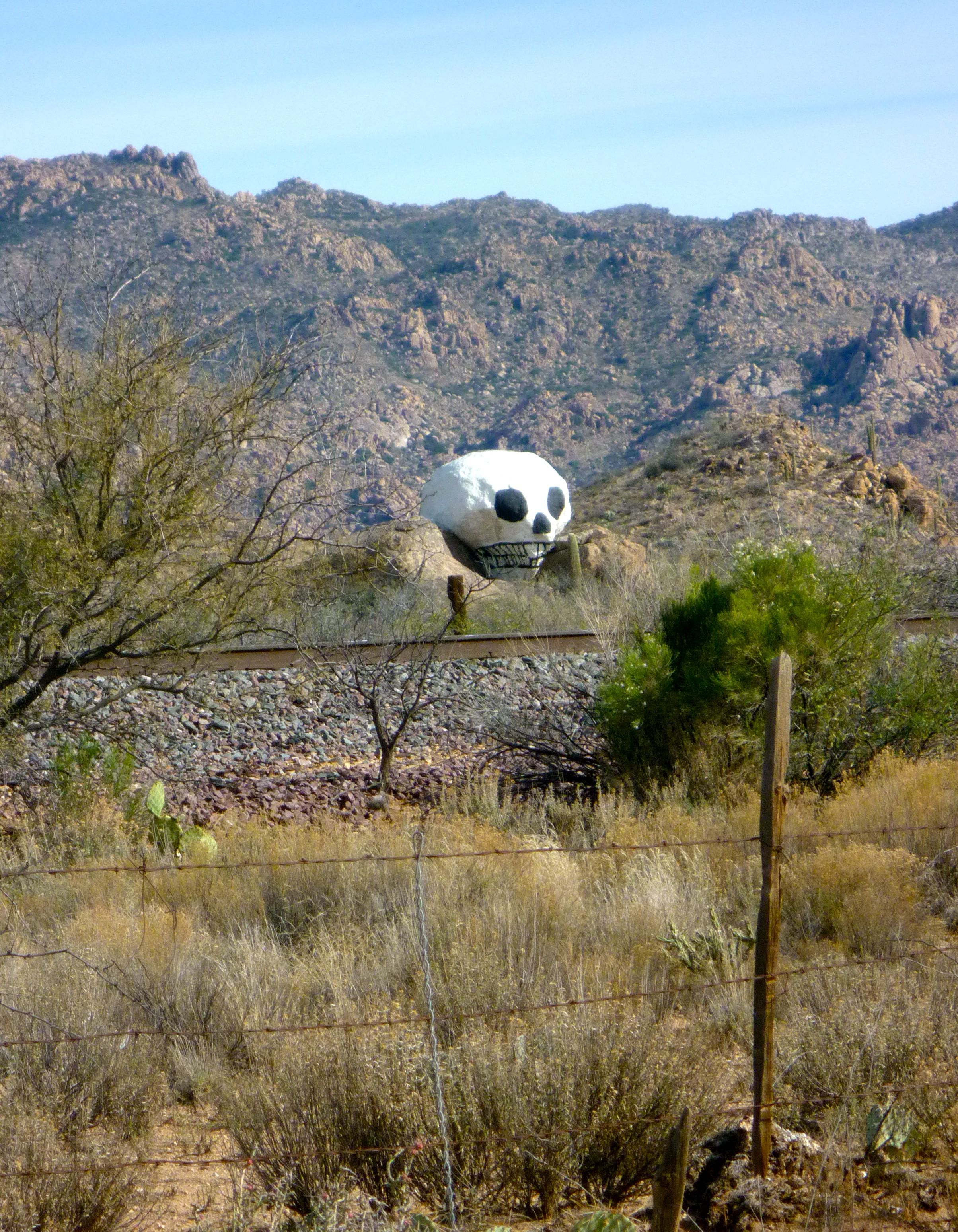 Skull Rock, we’re told, was the brainchild of some very, very bored Santa Fe employees. Story has it that they got the bright idea of telling passengers that angry Apaches had picked off a tourist and left his skull on the desert. Then the train would come across…this.

Once we hit Yarnell, nothing would do but what we had to visit the Shrine of St. Joseph, a remarkable outdoor tour of the Stations of the Cross built into the boulders above the town. Even though it was badly damaged by the Yarnell Hill fire — they lost their gift shop and many of the sculptures were damaged — they soldier on. Supposedly the stark white statues depicting Christ’s last hours were built in 1939 by Felix Lucero, a native American artist who at the time was living under a bridge in Tucson. It’s a beautiful and strangely restful installation —  not to be missed if you’re ever in this part of the world. 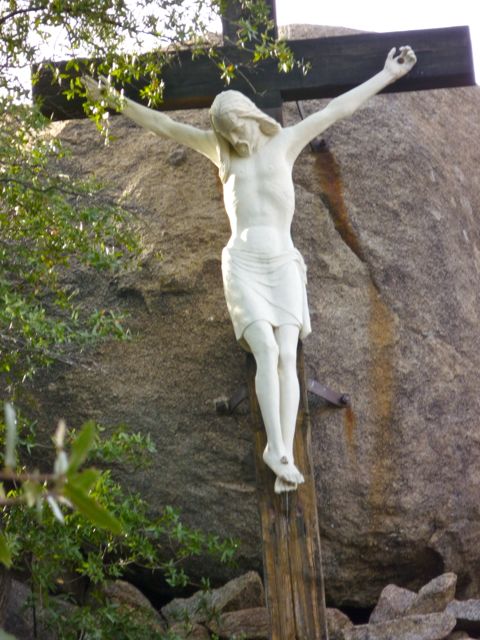 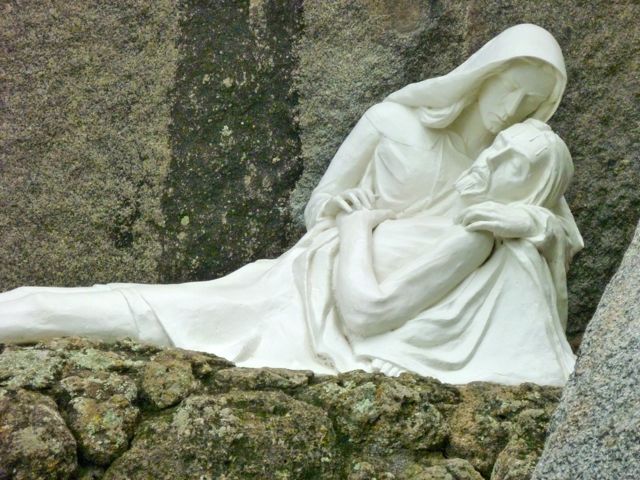 Moving on from the sublime to…yeah. We couldn’t leave town without visiting my favorite landmark, the Yarnell Emporium, home to all things arty and kitschy. 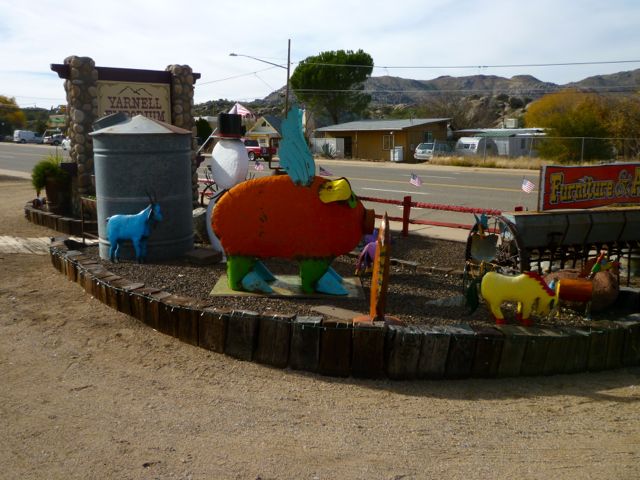 NG and I did our best to convince SDXB that his yard needs — needs, we say! — a flying pig… 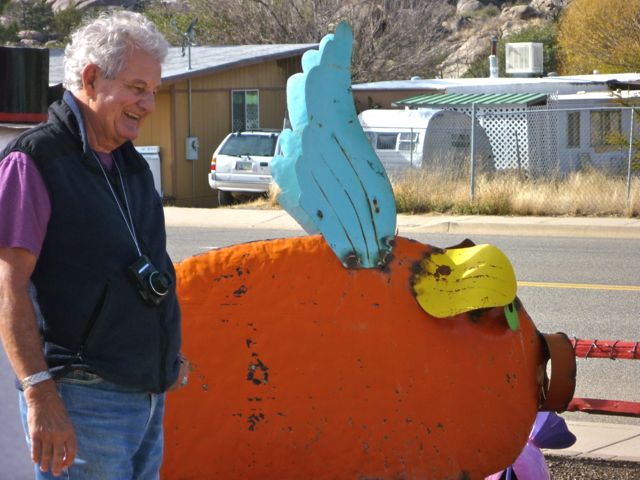 …but he was having none of it. No accounting, eh?

The Emporium carries a collection of hand-made, artisan crucifixes (because of the Shrine being a tourist attraction…get it? heh…), which I’ve taken to collecting. They’re not very expensive, and some of them are very cool. Picked up two of them yesterday. 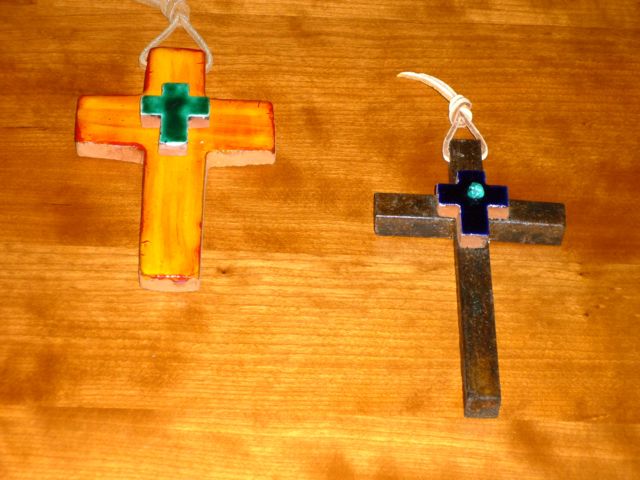 No matter what I try to do here, my camera refuses to do these things justice. They’re really very handsome artifacts… The one on the left is stoneware with a yellow-gold and red glaze; the inset cross is a deep bluish-green. The other one is an iron cross with a stoneware inset cross, blue-glazed with a stone that looks convincingly like turquoise but that, given the price, almost certainly is not.

Moving on, we visited a couple of historic cemeteries SDXB had heard of, way out in the desert. The ones that date back to the late 19th and early 20th centuries remind you of how hard life must have been out on the frontier, way to hell and gone out in the middle of nowhere: the babies, the young man dead at 22. Heaven help them. One was a veteran’s cemetery, filled with men and women who had served in World War II, Korea, and Vietnam.

It’s so beautifully quiet out there. In one of the graveyards, I saw javelina tracks, where a herd of the critters had strolled through at some point. So wonderfully quiet.

When I wake up in my bedroom here in lovely uptown Phoenix, I awaken to a distant roar — every morning — that sounds like jet aircraft flying over, maybe two or three miles off. After awhile, you figure out it’s traffic noise: it’s the ungodly roar of rush-hour traffic passing almost a mile away.

If I could be buried in the place of my choice, it would be out in the desert among the boulders and the hills and the javelina. Failing that…

2 thoughts on “A Junket to Yarnell!”