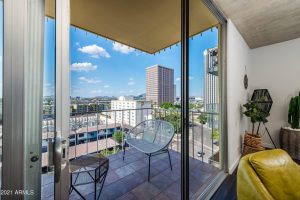 Of late… I grow more and more intrigued by the possibility of trading the Funny Farm in on a swanky apartment in the mid-town area. These are now proliferating with gay abandon, all over downtown and midtown Phoenix. Many of these places look very nice, indeed.

My agèd friend J., in insisting on moving herself and her husband L. into the prison for old folks that is the Beatitudes, was right in thinking that trying to live independently as you progress deeper and deeper into the Land of Old Age gets riskier and riskier with the passing the months and years. Now, she and L. were in their 90s when she insisted that they up and move into an institution. AND, more to the point, they had a dangerous lunatic living next door, who threatened not only them but other members of the HOA — one of whom was on the freaking City Council. Apparently nothing could be done about this nut case until she actually assaulted or murdered someone…and since the wretched woman had become quite a nuisance, it was reasonable to say “Let’s get away from this.”

And given their age, it was reasonable to decide the best “away” was into an old-folkerie.

But…ugh!! What a way to live! In a dormitory for old folks.

It seems to me that if you lived in a high-rise apartment whose building was well maintained and centrally located, you could replicate most or all of the services offered by the Beatitudes. Videlicet:

Those steps would provide the same services and goods that an old-folkerie would: food, regular check-ins, emergency services. Uber could take you to church, plays, movies, restaurants, grocery stores, sporting events,  and whatever else you pleased to do. For that matter, if you lived on Central Avenue, public transit would take you to most of those places. In other words…if you thought it through, you could replicate the services and advantages of an old-folkerie, without the depressing disadvantages. And being in one of those centrally located apartments would facilitate that scheme.

I’m thinking that given my age, even though I’m still pretty spry, maybe I should think about how I can get myself into one of those places and make it work as a haven for the pending decrepitude. A lot of those strategies could be replicated right here in my own house…EXCEPT…

This is something that bears thinking upon…