Cassie the Corgi started to fall sick about the first of September. Migawd! It’s the 18th of October now…that poor little dog has been ailing for over a month and a half!

However…it looks like she may be on the mend. That is, if you assume that whatever is growing on her adrenal gland is benign.

Since it won’t do her or me any good to know what exactly that is — because of course I can’t afford thousands of dollars on surgery and cancer therapy for a 12-year-old dog — we are throwing the dice and betting on the come: that the thing is one of the 50% of such growths that are harmless. 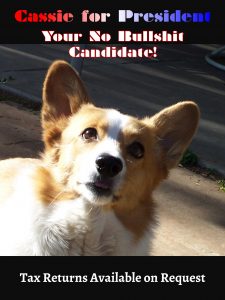 She’s acting like that now. She finally has recovered from whatever ailed her and the horrific drugs that made her even sicker than the ailment did. Her cough is about gone except for when she drinks water…but she’s always choked on water, long as she’s been living here at the Funny Farm.

And this evening, for the first time in all these weeks, she’s been up for a beloved doggy-walk!

We didn’t try to go far — about a third of a mile, maybe — and she was looking a little tired by the time we got back. But it made her and Ruby the Corgi Pup very, very happy.

She’ll have to work back up to the traditional mile-long speed-walk. It may be that she’s a little too old for a fast stroll, but I’m pretty sure she’ll eventually get to where she can at least amble through our usual circuit.

Will she live a lot longer? In human years, I’d bet not. She is, after all, an elderly dog. At 12, a medium-sized dog has supposedly aged as much as a human ages in 69 years. But we don’t know she’s only 12. That’s what the Humane Society said was her age. But too often the staff at rescue shelters just make a guess at a dog’s age. When she came to live at the Funny Farm, she certainly didn’t act any younger than two. She could have been three. Ruby is around four, and I’d say she behaves very much like Cassie did ten years ago.

So…if Cassie was three then, she’s 13 now. If she was four then, she’s a very elderly 14 now. It’s hard to tell with a corgi: they’re vigorous, sturdy dogs, and Cassie was born before the breed was “noticed,” so is not overbred. If we cast our imagination to the outside border of this speculation and allow that she could even be 14, that would give her a human age of 78.

I’ll be happy if she lives another year or so and does so without undue suffering. And at the rate she’s going now…I don’t think that’s outside the realm of reason.