Or off, actually. As in off the fu*kin’ wagon. There’s nothing like a nice cold bourbon and water to brighten your crabby day.

Actually, there’s nothing but bourbon and water, as I’ve unloaded all the wine and beer in the house on friends, by way of refraining from drinking it. I’m not all that nuts about bourbon, so I didn’t donate that to anyone’s cause when I went on the current wagon ride. But..well. One has to allow that bourbon does have its high points.

For the past several weeks, I’ve thought the portulaca living in the hanging Mexican pots and growing in ground pots over by the west wall was being eaten by some kind of insect. What kind of insect escaped me, since as far as I know we don’t have anything around here just now that’s capable of stripping the leaves off a portulaca. And even if we did…hmmm…well, the leaves are laying on the ground, not occupying space in some bug’s innards.

Soo… I google “leaf drop portulaca” and discover lo! the main cause of leaf drop in elephant-food plants is overwatering.

Overwatering????? WTF? The watering schedule is exactly the same as it is every summer in these parts: 20 minutes a day, early in the morning, leaving about 14 or 16 hours of sunlight to dessicate the soil in those pots. If you don’t water a potted plant every day in these parts, it will croak over by nightfall. In the summertime, that is.

And summertime is what we’ve had, with a vengeance. It’s been hotter than the hubs of Hades for the past three months. It’s 100° out there, as we scribble. This morning when I took the dog out, humidity was 52%; now, at a little after noon, the air has dried out to a mere 22%, which isn’t quite what I’d call “a dry heat.” It’s particularly not “dry” when you need to work outside but you’re required to cover every square inch of your skin to keep from exposing any part of you to the sun. 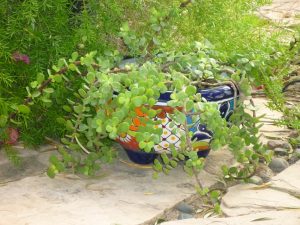 So I would’ve thought, if anything, that the problem was the plants were underwatered.

But now I think not: the pots’ soil is soggy. If it’s been that wet for the whole summer, well…yeah. The succulents could very well be drowning.

Meanwhile, the rest of the garden has been mightily neglected. The spider plants are dancing the hula in skirts of dead leaves. The calla lilies, also apparently overwatered, are curling up and dying. The bulb thingies Joan gave me are barely clinging to life. The citrus needs to be fertilized. My neighbor Terri’s accursed pepper tree has again seeded the yard, so half a dozen baby invaders need to be sprayed. One of the pots of chard croaked over in the summer heat: new seeds need to be tracked down and planted in that thing.

Ugh. How do I want to work in this heat? Let me count the ways…not…

That profound non-desire notwithstanding, I charged out and cut back dead stuff, cut back dead stuff, cut back more dead stuff. Transplanted one very sick-looking spider out of the pot it had outgrown into a much larger pot that had enough soil to accommodate it…noted that said plant, too, appears to have been overwatered. Dragged three bags of debris out to the garbage, along with two trashcans full of household garbage that was living (heh) in the garage.

Turned off the watering system. Made a calendar note to check soil moisture on Sunday and turn the water back on, as indicated. If indicated.

Having no potting soil, I was unable to transplant the suffering portulaca in the hanging pots. The next time I’m out running around — which will be tomorrow — I’ll stop by a nursery or Home Depot and buy a bag of dirt; then figure out what on earth to do with those things. While there, I’ll get a packet of chard seeds and drop them into the bereft chard pot.

Now we await the defrosting of the scallops, which we intend to stir-fry with garlic and pine nuts and serve up over some lovely chard  + spinach, possibly curried  (there’s not enough chard in that pot to supply a meal just now). Yes. Possibly curried, or possibly just smothered in Pomí tomatoes, which handsomely approximate a decent tomato sauce. 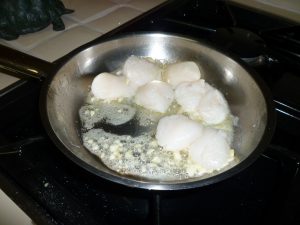