What a wonderful morning!

I thought I was supposed to be down at the church office shortly after dawn cracked, to stand in for one of the volunteer receptionists. So I arrive, plug in the computer (having brought 27 pages of client copy to while away the time), and settle in.

Shortly, in pops the Boss Volunteer.

“Hey! You’re supposed to be here this afternoon. I’m on this morning.”

Well. Ahem. Naturally I suggest that if she wants the morning off, I’d be happy to switch. (“Happy” being a highly qualified term in this context.) What a shame: she has to pick up the grandchild shortly after 12:30.

Arrive back at the Funny Farm to find the dog moping under the toilet in the back bathroom. (Don’t ask: I have no clue why the dog thinks the cubby under the toilet amounts to a dog den.) At the words let’s go for a doggy walk, she shoots out of the bathroom and flies to the front door

It’s still cool enough to manage a mile-and-a-half circuit of the ’Hood.  It’s a strangely lovely little enclave of affluence, despite being bordered on two sides by drug-ridden slums. 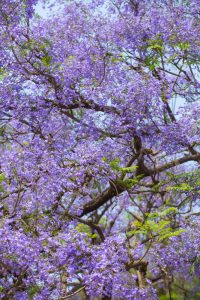 Over in Lower Richistan, one house harbors a huge, beautiful jacaranda tree, now in full, brilliant blue bloom. It is the most gorgeous tree you could ever hope to see.

Across the lane into Upper Richistan, an elderly lady lives in a big old sprawling mansion of a ranch house on about an acre of land, which she keeps up like a park. Her property is meticulously, spectacularly groomed. Most days when we pass there, her yard service, whose proprietors dub themselves “Paradise Ponds and Gardens,” are there puttering around. They must visit almost every day. The place reflects it, too.

Other shacks there are less ostentatiously landscaped but equally tidy — they don’t require a gardener’s daily attention, but nevertheless they’re expensively mown and trimmed.

As usual, we run into morons. Honestly…it’s hard to understand how some people ever learn to tie their shoelaces….

First one is putzing up Feeder Street NW, evidently in no hurry. The hound and I are stopped on the sidewalk, under the stop sign that clearly says traffic crossing Feeder is to cede the right of way. We wait for him to go by.

But no. Ohhh, nooooo! He’s polite. And the little dog is so cute he’s driven to feel even more polite. He stops his car. I wait for him to go by. He waves his paw at me, a sappy grin on his face: go ahead go ahead!

I hate that. I just hate it when some idiot thinks he’s doing me a favor by stopping in the right of way and frantically motioning to proceed in front of him — illegally. What the hell is the matter with people?

Does he really think that my standing there for three whole seconds while his car passes by is THAT big an inconvenience to me? Does he seriously believe he’s doing me some great favor with this silly trick? Does he truly not grasp the concept that urging someone to cross a road illegally puts that person at risk?

God, but people are stupid.

This particular brand of stupidity irritates me most radically because I once got T-boned when some idiot stopped, waved me across in front of him (and the as-yet unnoticed guy tooling along in the lane to his left…), and I took him up on it. With my infant son in the car. In that case, we had two idiots in collaboration: him and me.

So we make a loop through the forested lanes. On the homeward leg, toward our low-rent tract, we encounter a woman with a large furry dog in tow. She is not paying the slightest bit of attention to anything that’s going on around her. She holds a phone up to her ear. From the phone blares a stream of dopey-sounding music. She is, in a word, entranced…

Not caring to discuss the time of day with her barely-under-control dog, I cross the road so as to put some distance between us and the oblivious woman and her not-at-all oblivious beast.

It notices. It lunges at Ruby, growling and barking.

Recovering from nearly being jerked off her feet, the Blithe Soul coos, “Ohhhh, what a cute little dog!”

“He’s really friendly. I usually let him off the leash so they can play!”

I dodge across Feeder Street Northwest, hoping some driver in a ball-busting hurry will come blasting between us. Fortunately, she’s too interested in the racket coming out of her toy to pursue the idea.

At any rate, it was a beautiful morning (and remains a beautiful day). The little dog was beside herself with doggy joy to come out from under the toilet and circumambulate the neighborhood. That was a very, very happy dog.

I realized that I was secretly (not so secretly, maybe) relieved not to have to sit here all morning, editing a client’s copy while nothing much happened in the office.

What do I want to do in retirement? What do I most want to do with the small portion of time remaining to me?

I’ll tell you what I wanna do.

♦ That is, I wish to do as little as possible. Nothing, preferably.

♦ Nothing is plenty enough to keep me busy.

• Today, for example, I need to traipse up to Home Depot to pick up a bag or two of potting soil, therewith to plant some new chard and refresh a number of other plants.  While there, I probably should get a basil plant to replace the one that’s expiring of old age.
• Or maybe go by AJ’s and spend too much money on something good to eat.
• Or take the dog for another walk.
• Or just anything that does not require the expenditure of anything resembling mental or physical energy.

Loafing. The highest and best use of one’s time.