Make that eleven dogs: add in Cassie, Ruby, and Charley. 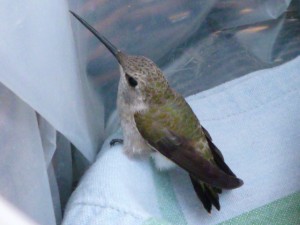 This morning I needed to make a Walmart run fairly early in the day, so as to buy another package of giant pee pads with which to protect my floors from Cassie’s incontinence. In fact, she’s getting a lot better. But not having to mop up great Salton Seas of urine and then disinfect the lake beds made such a difference in the human’s misery quotient that I determined not to run out of the things.

Charley, who’s visiting while M’hijito junkets in Colorado, also tends to defile the floor…but not with pee…

Leaving them here unobserved so soon after feeding time was ill advised. So I did something even more ill advised: decided to leave the back door hanging open while I was out, so they could come and go as nature called.

It was, after all, pouring rain. Not likely any burglars would be working in that deluge. If they were, they would earn whatever they stole. 😀

So yeah. No burglars came visiting, but another intruder moved in: a hummingbird flew in the back door. Once in the house, he flew up into the kitchen skylight, where he became hopelessly, despairingly confused. He could see the sky through the cloudy glass, and of course, being a bird he figured that WAS the sky. But being a bird, he could neither figure out why he couldn’t get through it nor figure out that he needed to go DOWN, not up, to get out of his trap.

This is the second time such a thing happened. Last time, some years ago, I called Liberty Wildlife. The volunteer I reached this morning was dubious. In the pouring rain, all their distressed-critter rescuers were hunkered down, and believe me: NONE of them wanted to venture into the downpour.  Quite reasonably so.

He asked me to call back after 11, when a different volunteer would be on duty and more folks might be available to call on.

So I called several other rescue organizations, some of which could not be reached at all, some of which had endless yakathon/ear-splitting Muzak phone trees (how i HATE those things!) that were so discouraging that after five or ten minutes I’d hang up, some of which just didn’t answer at all.  Game and Fish greeted me with the familiar electronic run-around. Called the Fire Department’s non-emergency line. They suggested Game and Fish. I said I thought not. So they suggested the Humane Society. The Humane Society’s aggravating yakathon said they’d answer the phone in about ten minutes and then blasted an even MORE infuriating loud fake music at me. I couldn’t turn the sound down on the phone-set low enough to make it less distracting or less infuriating. Finally I realized that the Humane Society is less than ten minutes away from me. So jumped in the car and drove up there, where I found a roomful of live human beings. They suggested Game and Fish. 😀

Back at the Funny Farm, I called Liberty Wildlife again. The new wrangler on duty said they really weren’t supposed to rescue birds that weren’t large enough to harm a person.

Heh. Do you suppose I could persuade them that the hummer was trying to poke my eyes out with its long spear-like bill?

She agreed to call some volunteers, having identified the person she thought was closest to the Funny Farm. But she wasn’t sure she could round him up.

So that was pretty discouraging. I figured I’d just have to wait until the little bird became exhausted and dehydrated enough to fall to the floor, at which point it would die.

But no! Not too much later, along comes a phone call from a man who says he’ll be right over!He lives in the mid-town area, and seemed not to be fazed at the prospect of driving through the rain to rescue a hummingbird from a strange woman’s house.

LOL! Liberty Wildlife has come through!

He arrives at the door. Cassie, Ruby, and Charley, all three of ’em, fly into an ecstasy of Dog Joy upon greeting the guy. They clearly think this is the single best human they have ever seen on this planet, bar none. He introduces himself as Chris. The dogs apparently interpret that as “Christ”: they are now in full-out worship mode.

Chris says he loves dogs. He and his wife have eight of them, several of which are rescues. I say I found Cassie at the dog pound, where she’d been relegated because she barks. He agreed that barking was surely a unique trait for a dog…

I’ve already hauled the ladder in and wiped it dry. Takes Chris about thirty seconds to snab the hummer in one of those nets you use to lift fish out of water. I make a mental note to get one of those next time I’m near the sporting goods store. Bird delivered to the Great Outdoors, it takes off like a feathered rocket, chirping furiously.

So that was good. Sent them a little donation as a token of appreciation.

That and the fact that Cassie is getting much, much better were the only decent things that happened today, a true, certifiable Day from Hell. 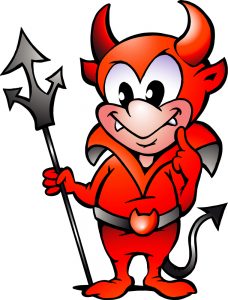