Stupor Bowl Sunday opened with a rare meteorological fluke: FOG IN ARIZONA! We woke up to San Francisco in the desert. 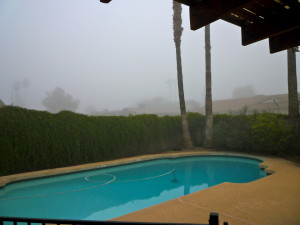 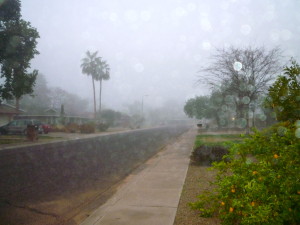 Photos leave something to be desired…I’m afraid the camera’s on its last legs. Or whatever cameras have. Don’t know why the lens decided to create the sprinkler effect: no rain was in evidence, and the lens was dry. Oh well.

It actually wasn’t a San Francisco fog. In Arizona it’s more like tule fog, where a freak of temperature causes moisture in the ground (it’s been raining for two or three days) to rise into the air. Like tule fog, it was patchy — barely filmy in some places but thick as soup in others. Overall, though the effect was very lovely.

Cassie and Ruby are definite San Francisco dogs. We had time for a doggy walk this morning before I had to race off to choir. They were thrilled. Both dogs frisked right along, and Cassie did not, for a change, run out of steam.

Arizonans, unfortunately, cannot drive in fog. Amazingly, as we were crossing Feeder Street North, along came some moron with his lights off. If I hadn’t heard him coming and stopped at the curb, he would’ve hit us.

Ah, my fellow homicidal drivers… They can’t drive in fog. They can’t drive in rain. Snow? Don’t even think it! And heat drives them mad. As a practical matter, I suppose they can’t drive at all, really. Came across a brace of cops attending a fender-bender a mile from the house; more policia between there and the church.