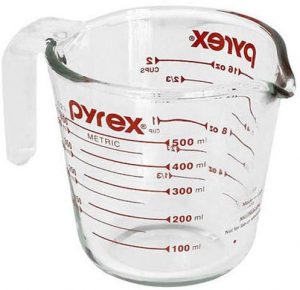 As suspected, simply waiting for enough time to pass caused the missing two-cup Pyrex measuring cup to reappear. To say that nascent senility is much like gazing into a Magic 8-ball is…well, no exaggeration. Things go missing. They disappear into the air. They stay gone for awhile. And then one day they surface, as if by magic, in some perfectly reasonable spot where, no doubt, they have been residing all along.

So where was the damn thing?

Where else? In the dish drainer, in the kitchen sink. Exactly where anyone who had recently filled a measuring cup with water would place it to drip dry.

Why could I not find it? NO idea. I must have looked right at it at least four times while thrashing around searching for the damn thing. 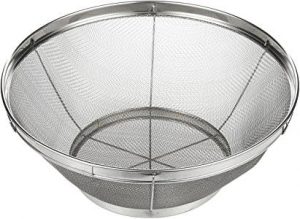 In defense of my idiot self, I will say that it was sitting beneath a sieve-type colander made of steel mesh. One could argue that this object was a bit of a distraction. After all, I was looking for a glass container, not a screen bowl. But still…it’s not what you’d call “opaque.”

All that thrashing around for… what?

To my delight, I discovered that the recovered glass measure is indeed the OLD version, made in the USofA, not the cheesey product that is pawned off on US consumers today. That is, if you believe the remarks of Amazon customer reviewers, who claim that the original Pyrex can be recognized by the type font used for the painted on brand name. The genuine original was marked PYREX — in all caps. The knock-off is marked in lower-case type, as the one in the image above: pyrex. Yes! Mine IS all caps. 😀

Lightheaded with hunger, as dawn cracks I stumble into the kitchen behind the dog. I’m fuckin’ starved…and realize i have got to eat! must have FOOD!

None of the rather vile and flavorless items I’ve decided to substitute for the cheese and fruit that I usually eat in the morning is working. I just can’t gag that stuff down — I mean, the various fine dishes I’ve imagined might take the place of my favorite chow. Let us be honest: if it doesn’t have cholesterol in it, it just freaking doesn’t taste very good!

The result is, I go hungry all day because I feel awful from the bronchitis, and because I’m not eating I’m getting sicker and sicker. By noon I can hardly drag myself out of bed, and I certainly don’t feel like fixing a full meal. Or any meal.

So this morning I decided it doesn’t much matter whether I die of a heart attack or of malnutrition. Fuck it! And broke out a slab of fine Leicestershire cheese. 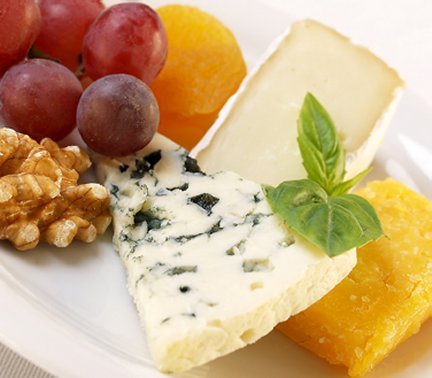 Interestingly, I haven’t died yet. Felt noticeably better most of the day — even managed to walk the dog about 3/4 of our usual route (she hasn’t been out more than twice since this fiasco started four weeks ago!). Still spent many, many hours in bed, but felt like I might live to one day clean house again.

A day or two ago, I bought a package of free-range chicken thighs. Put those on the grill this afternoon, along with some asparagus and a package of rice to reheat. Not too inedible. This little feast is still sitting on my stomach like a rock…but at least I’m not hungry, for a change.

My poor little pooch must think the globe has stopped rotating on its axis and revolving around the sun. About the only exercise she’s getting entails luring the Human out of bed and out to the treat jar in the kitchen. This, of course, is making her fat. The Human’s not exactly getting skinny, either, come to think of it.