Every wonder if we’ve come unstuck in time?

Well, the answer is yup. We sure have.

This morning I conceived an anachronistic  desire for a product that I imagined was commonplace.

To wit: a pair of kitchen tongs, the kind you pick up a steak with to flip the meat over on the barbecue or in a frying pan.

You realize: these are now quaint, hard-to-get rarities… You can barely find a pair, not for love nor money. Today I went to FOUR HUGE STORES in search of one stupid pair of tongs, like this:

Mine were the second model. After quite a few years of service, the thing just wore out. Fell apart in my hands when I lifted it out of the dishwasher, the little screw that serves as its axis having rusted through.

Well, I figured this was an Albertson’s sorta thing, since I’ve always bought cheapie day-to-day cooking tools in supermarkets. Zip down to the corner store: nope. They ain’t got it.

At the WalMart: no sign of any such thing. Asked an employee: never heard of it.

The Safeway lady knew what I was talking about, but she couldn’t find it.

Head into the Safeway parking lot  toward my car, which I’ve parked at the far end of the lot so I can pull straight through. There next to the Tank is a young couple looking very distressed, standing beside to a late-model sedan, also parked facing outward….with its entire front end smashed in. The girl is trying (unsuccessfully) not to weep. The guy is manfully holding up.

I offer to give them a lift. They say someone is on the way (so they were told…been there, haven’t we?) They’re upscale-looking black folks…the only dusky faces in the entire parking lot.

What a predicament! I figure it’s no wonder the girl is about to cry.

There’s no way in Hell that car could have been driven from the street into the parking lot. That means some bastard must have backed into her car, bashed the bejayzus out of it, and taken off. And that means he missed my car by about three feet…

Felt really terrible for them, but secretly was glad to stumble homeward.

Thence to the AJ’s, which is a bit of a specialty store…for that reason I didn’t think they’d have tongs. But I did need some dog food, and the ritzy stuff Ruby favors is most likely to be on offer there. And lo! Darned if they didn’t have a pair o’ the things! Overpriced, of course — it being AJ’s. But at least there. Scored the dawg food, too.

Life in the Big City…ain’t it grand?

Speaking of which: more shootings, more violence on the route I take to the dermatologist’s office, which is way on the west side. To get there, I have to pass through a venerable slum called Maryvale. Well actually: no. To get there I can cross over to the far west side on a northerly route, which takes you through mile after mile of middle-class ticky-tacky, most of which is reasonably safe, and then drop south on the Interstate 17.

But to come back toward home, I tend to drive a mid-town/southerly route, eastward across a surface street called Indian School, because it takes you near the best Sprouts store in the Valley. From there I can go straight north, through a reasonably safe area. To the extent that any area of Phoenix can be called “safe.”  Any of the east-west streets at the latitude of Indian School and west of the 17 very, very far from “safe.”

So how was your New Year’s festivity?

Do you have access to fireworks in your parts?

For some years, fireworks were outlawed here, except for a few small bang-bangs on the order of cap-gun paper. Then the right wing and its corporate allies rose in revolt, and at this time just about everything is legal here except for the ones that go waayyyy up in the air. The result is an astonishing display of public stupidity: fires, children and pets terrorized and hurt, nitwits injured, air polluted for days, and more noise than you can conceive. 😮

The racket goes on and on and ON into the night, eventually tapering off around 1 or 2 in the morning. It really is stupid stuff, though a lot of the locals love it.

Every year I think that NEXT year I’m gonna go out on the desert and camp through New Year’s Eve. But…that project, truth to tell, would make for even more hassle and annoyance than staying here and staying awake through the festivities, at least till 1 or 2 in the morning. Plus the weeds in the alley and the mounds of cat’s-claw vines over the backyard walls present a very serious fire hazard. Afraid it would be pretty foolhardy to go off and leave the Funny Farm at risk of uninterrupted vandalism or accident.

Oh, well. It’s only a little after 8 p.m. Think I’d better not take the dog for an evening walk, partly because it’s darned cold out there (another “atmospheric river” wafting in from California) and partly because idiots are still blasting away with their bang-bangs, which is likely to terrorize Ruby. All I need is for her to break free and run off into the night!

So instead, alas, I’d better treat the (still!) wounded eye and the dislocated jaw before attempting to hit the sack. And so, awa-a-{stumble}-a-a-y! 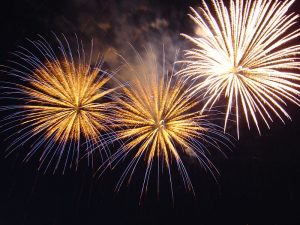