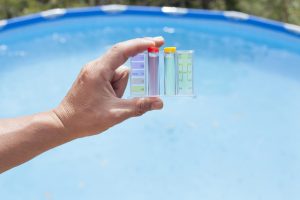 So Stupendous Pool Dude’s plan to de-haze the pool seems to be working. His strategy entails pouring vast quantities of liquid chlorine into the drink, keeping the chlorine levels at “5” for a couple of days and holding the pH up, whilst running the pump through the main drain, which he believes will circulate more water faster than the usual set-up, wherein water is pulled through the skimmer.

Today the water stayed fairly clear all day, throughout some of the hottest hours we’ve had this summer. Usually by the time the sun hits that water at mid-morning, the thing is London Fog.

Right now a storm is blowing in, complete with light show. That will blow large quantities of debris into the thing, which, since the strategy involves running the pump all day and all night, is likely to get sucked into the drain. I’m not going out there and shutting off the motor, partly because I do not wish to be electrocuted by a random lightning bolt and partly because I’m so tired I expect to be asleep by the time this storm ends, not out there skimming off the surface in the dark.

There is, after all, a limit.

Picked up another eight gallons of chlorine at the Depot today, four of which I’ve dumped into the drink. The chlorine level was down to nil this morning, and by 5:00 p.m. it had dropped back down from 5 to a little under 1 (read: almost absent).

SPD gazed critically upon a large brownish area on the floor of the deep end. He thought it was dirt. I said no, I believed it to be a discoloration caused by the large amounts of granulated chlorine I’d already dumped into the pool: this stuff settles to the bottom and discolors the spectacularly expensive PebbleSheen. He seemed to accept this.

At the Depot this afternoon, I found and picked up a type of pool brush that combines nylon with stainless steel bristles. This is supposed to work better on the damned PebbleSheen, which is virtually impossible to clean. It literally eats up your nylon pool brush.

When I got it home and tried it out in the deep end, I found that yes: it did roil up the brown stuff and fluff it into the water. The gunk probably is a combination of dust and algae.

But I couldn’t scrub it off the bottom very efficiently. I simply don’t have the physical strength to make a pool brush work against that impossible PebbleSheen stuff. If the pool is to be cleaned adequately, I’m going to have to hire a young man or (preferably) a teenaged kid to wrangle that job.

And…just as I was leaving the pool department, what should I spot but…hallelujah, brothers and sisters! A LEAF VAC WITH THE OLD DESIGN THAT ACTUALLY WORKS!

Leslie’s has replaced its old leaf vac model with a piece of junk that is so bad their staff actually tells customers not to buy it. The redesigned it and in doing so produced an item that does not work. Period. The one at Home Depot — a different brand — still has the same old structure around the bottom and the wheels, and still has the same old style of hose connection. Those changes inflicted on the Leslie’s version are, I believe, what cause the thing not to work. The HD model, with what looks very much like design identical to the old, functioning leaf vac, should do the job.

I certainly hope so, because come tomorrow morning there will be plenty of debris in the pool for it to vacuum up!