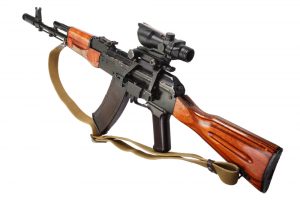 Once again, an outbreak of our nation’s public mental illness: madmen shooting everybody in sight. And as we know from experience, whenever one  nutcase picks up his fake AK-47 and blows away a bunch of innocents, every other crazy in the country thinks that’s a grand idea, so we can be pretty sure one incident will be followed by at least one more. That’s what happened this time…so far it’s only one copycat shooting. But the night is young…

Do you find yourself taking steps to avoid the line of fire when these outbreaks of lunacy occur? I sure do.

During the time we were living in London so I could do research for a book, the IRA was holding forth. They were extremely violent, and they favored bombs. They liked to make their point, such as it was, by killing not just British soldiers but British civilians. One of their favorite tricks was to drop a time bomb into a post box. The perp would be long gone by the time the thing went off, sending metal shrapnel as well as flaming mail in all directions. Many people I knew would not walk on the same side of the street where a post box was located, or if they saw one down the block, would cross the road before they got to it.

This was just one the various strategies the citizenry used to avoid being blown to kingdom come. People would avoid going to pubs known to be frequented by soldiers and stay away from various public events.

So the question is, what steps do Americans take to stay out of the lunatics’ crosshairs?

The day after the Dayton massacre, I needed to go to Home Depot. And I’ll tellya: I really was given pause. Unfortunately the need was pressing: I really didn’t have time to order online and wait several days for the product to be delivered. One of the things I tend to do, when these spates of madness are in progress, is stay out of big box stores, but I reluctantly drove up there — on a Monday, when I expected any perps would figure fewer targets would be around.

So what, if anything, can you do to protect yourself?

No, I do not carry a pistol with me, even though Arizona is a concealed-carry state. Nor do I carry pepper spray. Too unlikely that, under stress, I could deploy these in time to do any good. Unless you have nerves of steel and a steady aim, discretion is no doubt the better part of valor, when it comes to toting your own weapons around with you.

Thank God I don’t have a child today. It’s hard to imagine why any young person would deliberately choose to bring children into this fine world of ours. And apparently many of them can’t imagine it: US birth rates continue to drop.

If I did have a child, I would seriously consider home-schooling. I’m quite sure I would not like sending a kid into a school that looks like a federal penitentiary, where classmates are trained in the skill of avoiding bullets and parents are now buying “bullet-proof” back packs in the forlorn hope that such silliness will protect their children. 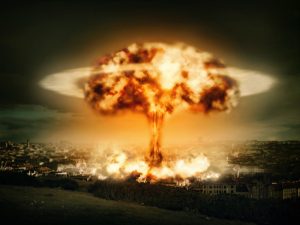 When I was a kid in San Francisco and in Southern California, our schools had regular air-raid drills. Everyone knew how farcical these were: the high school I attended had entire walls made of glass: windows that extended three stories high, on each end of the building. “Duck and cover” meant “bend over, put your head between your legs, and kiss your ass good-bye.” My San Francisco junior high school had a plan to evacuate kids by bus down the peninsula, where in the event of a miracle they would be reunited (maybe) with any surviving family members who managed to find them. You could opt to have your kids sent home — on foot — which my mother chose to do. This involved having to cross Junipera Serra Boulevard, which as everyone knew would be bumper to bumper with panicked drivers, none of whom would be about to stop long enough to let a little kid run across eight lanes of traffic and a streetcar track.

These exercises were utterly terrifying. I used to have nightmares about air raids. Regularly. They were horrifying and kept me scared most of the time.

And that was for a hypothetical: Maybe, maybe someday Russia would act on a suicidal impulse and start World War III.

What we have now is not a hypothetical: it’s real and it’s immediate.

So how are you coping? What strategies do you use to help keep yourself safe? Or do you?