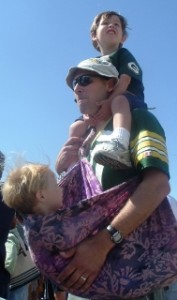 Lest you hadn’t noticed, stay-at-home parents face a new punishment: if you’re an SAHP, a 2009 change in credit-card rules means that you now cannot get a credit card in your own name, because, after all, what you do is not work.

This is just another of several rules and attitudes that devalue a type of work still done mostly by women. Some of the penalties for raising children and caring for a home and spouse have severe long-term consequences. Most notable of these has to do with Social Security: if you’re not spending your days in an officially recognized “workplace” and so having FICA withheld from your salary, you’re not eligible for Social Security. Never mind that you work 24/7 at humanity’s most important work: bringing up the next generation. If you take time out of a career to care for children and spouse, you’re likely to find your Social Security benefit significantly reduced come retirement age. This certainly was true for me—even though I worked steadily as a freelance journalist while I was married, my income was small and it mostly served as a tax write-off, leaving me with $0.00 taxable income during those years.

Graduate school didn’t help: pay for teaching assistants is even more exploitive than adjunct pay, and when I was overseas doing research my income came from grants and fellowships; thus during that period there were a couple of years where no taxable income appeared on the books.

Besides the insulting implication that the work you do is essentially worthless, the new rule means that as a stay-at-home mom or dad, you can’t establish your own credit history and build your own credit score. This puts you at a huge disadvantage should you divorce or be widowed.

Clearly there are ways around this. Most of them are infantilizing or degrading: they involve your having to beg your spouse to cosign or make you an authorized user (good luck with that, if you’re married to an abuser!), or to prevaricate by filling in the blank for your income with what is really household income—i.e., your spouse’s income.

However, over at Daily Finance, which is reporting on a protest led by one Holly McCall, a commenter comes up with a freaking brilliant idea:

Sit down and discuss with your other half how much you want for being a stay-at-home mom (which in itself is basically considered a luxury by society.) Form an LLC, maybe Holly at Home. Have your other half cut you a check. Don’t forget to take out tax, in case you become unemployed, need SS, or a tax write-off.

Wow. Think of that. Wish  my ex and I had thought of it, thirty years ago. (And, btw, notice the attitude implicit in “basically considered a luxury”: bringing up your children in their home instead of warehousing them in daycare is a luxury).

I spent a fair amount of my time as a corporate wife and SAHM…during which I did not rack up a salary and did not pay into FICA. If my husband had been paying a household budget to me as “salary” or into an LLC as contractor’s pay for housekeeping, child care, and public relations and marketing, possibly I could’ve claimed unemployment when we divorced. But more to the point, I would have been paying into FICA, and when I suddenly found myself laid off at 64, too old to get another job, I would have had a significantly higher Social Security benefit.

When you’re married to a heavy-hitting lawyer, doctor, or corporate executive who can afford to keep you at  home, you’re doing a lot more than scrubbing floors and chasing kids. You’re helping to build and maintain his public image and community presence by engaging in volunteer activities (as high-profile as possible), serving on nonprofit boards, entertaining clients and colleagues, and hosting social events. Basically this is marketing and PR. And it has a significant market value: PR people earn a decent wage in our culture.

Housewives generally don’t. However, the cost of replacing a housewife, should a stay-at-home spouse die or leave, reflects what that work is worth. In 2006, nannies were earning between $15,600 and $52,000, plus benefits. In my part of the country, a cleaning lady—who takes no responsibility for raising the kiddies—typically earns between $80 and $100 a day: that would come to between $20,800 and $26,000 a year. So, in Arizona a SAHP who does not spend a significant portion of her or his time doing PR for the working spouse would be worth $36,400 to $78,000.

This assumes the conjugal duties are unpaid. Try hiring a call girl or keeping a mistress and tell us what that would cost. 😉

Clearly, then, the SAHP’s work has objective monetary value.

So, it should be reasonable to pay that person through an LLC or an S-corporation. The implications are huge.

• First, as the person draws money out of the entity as salary, she or he pays FICA on it. That means s/he gets credit toward Social Security for work done for the household and the children. And it means that should the SAHP be widowed or divorced, she or he would not have to rely on the spouse’s Social Security credits—or be shorted if she spent some time working after the kids were grown but not enough to rack up the best possible benefit.

• Of course, it would also mean the SAHP would be able to claim, without having to lie on a credit card application, an income. Credit-card issuers could not deny a card by asserting that the applicant does not “work.”

• The SAHP might be able to create her own IRA or 403(b) through her corporation, allowing the couple to salt away a larger amount of tax-deferred savings.

• And of course, tax advantages always accrue around corporations. If the SAHP’s business entails schlepping children around town, driving to grocery stores, and attending charitable events, obviously the car and gasoline become deductible. If she is paid to clean house and she supplies the cleaning supplies and tools out of her pay, then the Windex, the Simple Green, and the vacuum cleaner should be deductible. If her duty is to represent her husband in the community by maintaining a public profile, then the cost of entertaining clients, serving on boards, and belonging to organizations such as Junior League, the art museum guild, and the zoo auxiliary should also be deductible, assuming she pays those costs with her income.

• Should the couple divorce, as some 50% of American newlyweds do, the implications could be significant. If the “working” spouse is paying a salary or contractor’s fee based on the market value of the SAHP’s work, it could limit the amount a court would award for support; or, on the other hand, it could serve as a floor for the amount to be awarded. That is, it could represent either a minimum or a maximum amount of alimony, depending on how courts viewed the arrangement.

Interesting idea, isn’t it? What say you, readers? Would you take a job as a stay-at-home spouse? How much do you think your services would be worth, objectively?