Nothing like a blog post to occupy yourself while you snack on figs and cheese. Have been working on marketing Camptown Races most of the day, with the exception of a brief trip to the drugstore & the grocer’s. Finally got a Twitter page established for the Camptown Ladies: https://twitter.com/RacyLadies

Very soon now, we’ll have a Giveaway contest: The girls need names! I suggested they might like to be called Madison and Ashley, but they didn’t much like that idea. And Aunt Tilly was abhorred!

So it was decided that we would ask the Hive Mind to come up with something fitting and true. Watch for that!

LOL! I’ll bet  you can’t guess who Aunt Tilly is. 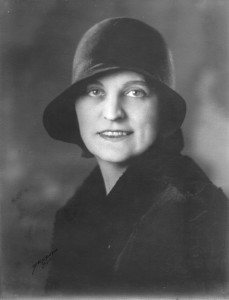 Aunt Tilly is my grandmother, Olive, whom I never  met. She was a flapper, in the true sense of the word — which was somewhat pejorative at the time. Apparently she was one wild little number.

A divorce-court judge removed my mother from the custody of both Olive and her caddish husband, assigning the three-year-old to the care of the cad’s parents. The previous child, whom I found out about only when I unearthed my mother’s birth certificate after my father had died, must have been adopted out — Olive was 18 when my mother was born. So…what can one say?

Except, Olive, my dear: You are PERFECT for Aunt Tilly!

She certainly was a woman highly qualified to pronounce the words “Not husband material.” The ideal mentor for the Camptown Ladies.

As long as we’re uploading images… How do you like this new entry in the Home Decorating Awards Competition? 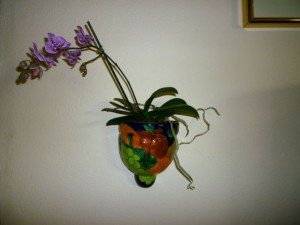 That little Talavera pot contained an elephant’s-foot plant that had taken root (from sprigs) and so outgrown its soil that there effectively was no soil left. It was shriveling from lack of water, especially in this summer’s unholy heat. Exit the elephant’s foot, into a larger pot.

Then it occurred to me that one of those little orchid plants you find at HD and Trader Joe’s would fit perfectly in there. And it does!

Here at the Funny Farm, orchids will survive, but they don’t grow appreciably. I expect this one will live for two or three years before giving up the ghost or outgrowing its home. Kinda cute, isn’t it?

To attach it to the wall, I hung the top end (which has a length of florist’s wire strung through a pair of holes in the back side) from one nail, and then a few inches below it inserted a tack into the wall which holds the pot’s lower end away from the drywall. To water it, of course, I’ll set it in the sink. But this will obviate any damage should I fail to wipe it dry before hanging it back up.

Ah. I see Amazon has responded to my query with an explanation as to how to establish a Goodreads Author profile.