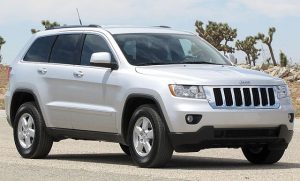 Like I have nothing better to do… Woke up this morning with the needle-stab-in-the-eye of ocular neuritis (or whatever it is: it’s never been diagnosed satisfactorily), swiftly followed by a fine migraine. These amusing headaches can usually be discouraged by a couple mugsful of coffee strong enough to hold a spoon upright. And yea verily, so it has proven: two hours later the pain has receded to the “mild” level, though otherwise I feel like I’ve been run over by the proverbial truck.

This is not needed in the midst of the various ongoing hassles.

The painter is still holding forth, and of course with furniture & plants moved around and outdoor watering systems derailed, that creates some background chaos.

My son is headed off for a long-planned road trip through Colorado. But with one change of plans: the dog. Since he no longer can take Charley in a car, he’s bringing the hound over here for me to babysit over the next ten or 12 days.

So…yes. Our doughty painter will have to navigate around not one, not two, but three dogs, one of whom weighs 90 pounds and two of whom are given to heading for Yuma at a dead run if a gate is left open.

I’ve pretty well got him trained to shut the gate behind himself when feasible and me trained to check to be sure the gates are shut before letting the corgis out.

But…. Among other things, Charley is given to the doggywobbles. He really needs to have the dog door open — normally I leave it locked shut because Cassie won’t use it and the burglars will. So this is going to present some difficulties over the next few days.

Our beading friends are having a beading party at my house on Saturday. I’m looking forward to it, because it’s a pleasant way to spend an afternoon. However…

Having to clean the house to the standards of half-a-dozen nice Catholic wymmen around an active painting job and three dog-dune shedders is not going to be an easy trick.

Meanwhile, yesterday I bought some delicious-looking hummus at Costco while I was running errands for myself and my aging friends — one of our beaders is genuinely hypersensitive to gluten (not in the faddish sense, either). Great snack for her and everyone else. But…heh…while purchasing this little find I failed to think…ohhhhh….hummus! Must have something to dip in it!

So now I’ll have to go back out — around the dogs and the painter — to pick up some tortilla chips and some veggies. Ugh.

Kid in, Dog in, Kid out. Half an hour of busy flapping, conveniently coinciding with Painter Guy’s arrival. I forgot to put down a second giant bowl of dog water…momentarily must get up and do that…but will wait until the sweat I’ve worked up subsides.

Dog seems more or less OK, though he definitely was hyperventilating from the car ride. If he has the collywobbles (as we’re told he does), it didn’t stop him from laying a fine coherent pile in the backyard. Oh well…I hadn’t picked up the corgi mounds yet.

I say, you’re planning to drive to Colorado in a freaking Jeep?????

He says he borrowed it from his father because his car, a reliable Toyota, isn’t big enough to hold all three guys and their camping gear.

I say, “Your father bought a freaking Jeep? I thought he was smarter than that.”

He says, “It’s been recalled four times and has broken down twice.”

Oh dear God. I hope one of those guys has a cell phone carrier that covers Monument Valley and the Navajo.

What on earth could have possessed DXH to buy a Jeep Grand Cherokee? For cryin’ out loud, the damn things are unsafe at any speed. WHAT could he have been thinking?

Is it too early to break out the bourbon? Surely the sun must be over the yardarm in Shanghai by now…

In smarter climes, the painter is doing an awesome job on the Funny Farm. And he made an amazing discovery. At some point along the line — probably six or eight years ago — I had the out-of-favor Bila the Bosnian Painter repaint the house’s west wall, the same color as the rest of the shack. This is a desert-dust brown dubbed “Baked Potato” down at Dunn Edwards.

So Painter Guy, for whom Dunn Edwards paints are presently out of favor, took the stuff over to HD and had five gallons of matching Behr exterior flat whipped up. “Baked Potato,” as it develops, is very popular in these parts — we could call it “HOA Greige,” and so the HD guys are experienced at concocting it.

He hauls this massive amount of paint back here and applies it to the west wall.

And hot damn! IT’S NOT THE COLOR! It does not match the HOA brown on that west wall.

He of course assumes HD screwed up, so he loads the tankard of paint back in his truck and flies back to the HD at 67th and Bell, in a state of high dudgeon.

While this is going on, I’m out running around the city buying groceries for myself and my aged friends, and then toting their share of the haul to their house. So the poor guy is pretty much on his own here.

At HD the paint department guys inform him that it IS “Baked Potato,” and there must be some mistake on this end.

He is beside himself. He now thinks he’s ordered five expensive gallons of high-test exterior paint…in the wrong color. The cost of which, he figures, is coming out of his pay. Worse, he’s convinced himself that I am going to HATE it.

Well. No. When I get  back and see the actual “Baked Potato,” I say, “There’s nothing wrong with that. I dunno why this doesn’t match, because Bila gave me the can of paint he used and that’s what we schlepped to HD for matching. Don’t worry about it. Paint the house with this.”

Now he proceeds for awhile, and then he resurfaces. “Take a look at this,” says he.

When he applies the paint to the other paintable wall, on the east side, it matches perfectly.

I have no idea what hijinks Bila got up to, but when he painted the west wall, he used a different color from the paint that was on the rest of the house.

Bila was fast and cheap, but one gets what one pays for: he really did a half-assed job. This guy has climbed up and filled the siding where it’s split and cracked, and, far more to the point, he’s gotten down on hands and knees and scraped and filled the cracked footing around the slab! Both of those are marvelous fun jobs…and it’s 105 out there. 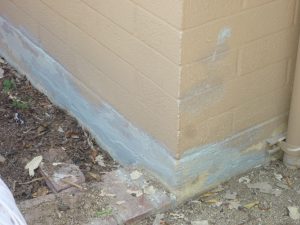 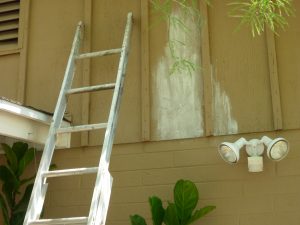 How glad are we that we’re NOT doing this job?

Charley and Cassie go freaking batsh!t when Painter Guy climbs up on the roof. So persistently batsh!t are they that I set aside the effort to make WordPress insert those images there the way I want, not the way it wants, walk out to the living room, and peer out the front window.

Migawd, there’s a cop parked in front of the teacher’s house. I know the family — Dad, Wife (who works at his school as a teacher’s aide), and four kids — left at the usual hour this morning because I heard them climbing into their cars and driving away.

Never a dull moment around the Funny Farm.