Reviewing the first quarter of post-Canning Day finances, I’m amazed to discover that I’ve not been spending as much money as I budgeted, and not anything near the amount that’s been flowing into the checking account. In fact, on average I’ve spent about $1,100 a month less than income!

The reason for this, of course, has been the part-time teaching, which will end in May and bring in nothing for two and a half months, when expenses rise into the stratosphere.

But…but my $805/month nondiscretionary budget, which includes those soon-to-be-stratospheric utility bills, is based on the bloated summer rates. So in theory, as long as I stay within the discretionary spending budget of $800, even in the summertime I shouldn’t be spending much more than $1,600 a month. In June and July, my income will drop to about $1,390 a month (maybe less, if I put my latest scheme in action—see below). That’s about $210 short. But with $3,400 sitting there from the first-quarter budget underruns, in theory it shouldn’t matter. Those two unpaid and two underpaid months would eat up only about $420 of the three thousand bucks residing there from the first quarter.

Here’s how this shakes out:

Yipe! The average monthly net left in my checking account, income minus expenses, has exceeded $1,100 a month!

Part of this happened because Social Security has been dragging its feet on withholding income tax from the benefit it’s paying. I’ve now asked three times and am assured that in April my SS payment will be $1,008, down from $1,257.

So, in April Social Security income drops about $250; in May teaching income drops in half and in May and June drops to zero. In August teaching income starts up again, with one paycheck that month, two a month from September through November, and one again in December. Net Fidelity income is $389 a month, giving me a net income of about $1,389 in June and July. For the entire year 2010, the result looks like this: 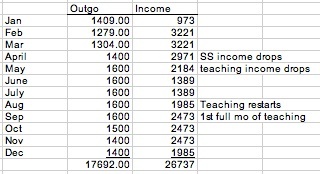 Can that possibly be correct? This suggests that teaching 3 and 2 and collecting $385 net a month from the Fidelity 403(b) will leave me with a surplus of over $9,000 at the end of the year!

Well, the state General Accounting Office demanded that I take a drawdown from my Fidelity 403(b), lest my request to collect my RASL be rejected. This worked contrary to my purposes, because that money needed to be left in investments in hopes that during the time I still have the strength to work, it will recover some of the losses incurred during the crash of the Bush economy. So I asked for $500, the least I thought I could get away with. The net on that is $389 a month.

The fact is, now that the first of the three annual RASL payouts has been approved and transferred to my keeping, it’s unlikely the RASL administrator is going to notice what’s going on with my drawdown. So, I’m thinking I should continue to draw down $500, but have only $100 deposited in checking, rolling over the remainder to my big IRA, which is professionally managed and doing quite well. Another advantage of this strategy is that it would drop my gross income into a lower tax bracket and might insure that none of my Social Security would be taxed at all.

Okay. So, what if I cut Fidelity income to $100 a month for the entire year of 2011? Could I survive? Let’s assume a 3% inflation rate for expenses, since everything but our paychecks is going up fast. In this scenario, I again teach 3 & 2 instead of 3 & 3:

Huh. Almost $5,000 left at the end of the year. These figures translate to after-tax funds I can use to pay toward my share of the mortgage ($9,000 a year) in 2011 and 2012, delaying serious drawdowns from retirement savings another two years!

So, if there’s that much play in the budget, why on earth am I working at all? What would happen if I didn’t teach in 2011 but instead collected the net $389 on a $500 monthly drawdown from Fidelity?

Yes. The Copyeditor’s Desk, Inc., would earn enough to cover the shortfall and more over the course of a year. As we come to the end of the first quarter, the corporation is holding $2,218, and I’m doing precious little freelance work! Net after a 20% tax payout would be $1,774. That’s for a single quarter in which I’ve made no effort to find work.

Teaching one section would net $1,920, more than enough to break even.

I have to ask you, isn’t that the most amazing thing you ever saw? I can’t believe my expenses are that low in this four-bedroom house on a quarter-acre with a big pool and a forest of fruit and ornamental trees.

And yes, it has occurred to me to wonder if I’m being too frugal here. Surely I can afford to get my hair done by a better stylist than the $30 guy—last week he left me with a tuft sticking out at the neckline and a kind of box-like cap on top. Possibly I can afford to buy some clothes somewhere other than Costco. Or, who knows? Maybe I could even afford a cell phone.

I don’t feel like my life is pinched. I still shop at AJs and Whole Foods; I still buy plants at the fanciest nurseries in town. So…is this money happening, or what?