Over at My Journey to Millions, my favorite conservative Evan is doing his monthly net worth review. He’s performing well. This month he reports that over the past year net worth has increased a startling 95.30 percent. Yesssss! Great work, Evan!

The amazing progress Evan has made since he started blogging says a great deal about stating a goal and then making (and following!) a plan to make the goal happen. In theory, it can work for any of us. As we know, Evan’s goal is to become a multimillionaire. It must be said that he has the tools: he’s well educated, he’s still reasonably young but has been around long enough to build the experience needed to earn well, he’s energetic and focused, and he’s willing to work hard.  You can frame all the goals you want, but unless you’re prepared to make them happen, they’ll avail you naught.

IMHO the key factor is the willingness to work hard toward the goal, followed by focus, energy, and growing experience. To that we might add flexibility. While we’re still told that people with bachelor’s degrees outearn those with AAs and high-school diplomas and people with graduate degrees outearn everyone else, I think we all know quiet millionaires who own landscaping and carpet-cleaning services, college grads with $30,000/year jobs, and people with graduate degrees who qualify for food stamps.

Well, naturally, having seen what Evan’s been up to, I couldn’t let my own figures just sit there. Over the past couple of years, frankly, I’ve been too depressed about the sagging real estate values and the likely permanent unemployment to even think about net worth. However, things may be looking up a bit. In January, as I mentioned a while back, my investments earned 16 grand, causing me to wonder why I bother to teach at all. The crash of the Bush economy devastated my savings: when times were good (October 2007), total investments (not counting credit union accounts) came to just over $743,000. My paid-off house was worth about $250,000 in 2007. By December of 2009, when I lost my job shortly after reaching an age to make me eligible for Social Security (and ineligible for hiring even under the best of economic conditions), the combined value of my investments had dropped to $483,000, a $260,000 loss; Zillow claimed my house was worth $180,000, and the house I was co-purchasing with my son had a negative equity of about $60,000.

So how do things look now?

Better. Since the crash, investments have risen $63,000, with no further deposits from me (because on Social Security and adjunct pay, one has nothing to invest). A neighboring house similar to mine sold in two days for $205,000, suggesting it was somewhat underpriced; since my house is the same model and upgraded to about the same extent, I figure mine would sell for about $210,000 or possibly $215,000. The downtown house is still upside-down, but probably to a lesser degree; I think we’re about $20,000 or $30,000 underwater now.

In April 2011, the last time I could bring myself to add up net worth, it looked like this: 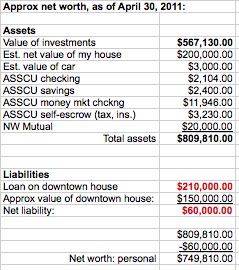 By the end of last month, the picture had changed slightly: 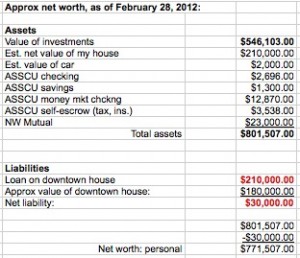 So what we have here is an “up but down” sort of picture. Despite a significant drop in investment values since the last time I could bear to look, and despite continuing depreciation of the 12-year-old vehicle, total net worth has risen by about 22 grand.

However, that figure is based on the Never-Never-Land valuation of the two pieces of real estate. We really have no idea what either house is worth, and besides: you can’t eat real estate. When it comes down to the money that matters—the funds I will have to draw down to live on when I can no longer dodder into a classroom—I’m merrily sinking beneath the bounding main. Since April, I’ve lost another $21,000 of the money I’ll need to cover expenses in my dotage. That’s despite the fact that I haven’t withdrawn a penny from those investments since I was laid off my job.

And that is why I need a real job. Now. Old age or no old age. Either that or I need Death to come a-callin’ in a timely manner.

Infographic: The Great Recession in the United States. Timetoast.

7 thoughts on “Net Worth in the Time of Cholera…”