Sustainable Personal Finance reports on a surprise harvest from the yard: out of the blue a tomato plant found a welcoming place to grow. Check out the pictures of what the little volunteer produced! And tell SPF about your take on gardening.

Me, I’ve pretty well given up on growing veggies in the yard. Buying them at the store, even organics, seems more cost-effective, and it’s one heckuva lot less work. 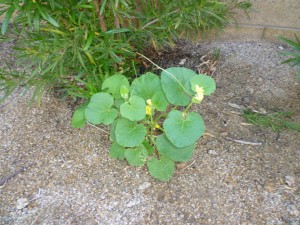 LOL! Look what volunteered in my yard. Spotted it when it was just making a bud and thought…what the heck, maybe it will be some sort of purty little flower. Its leaves look vaguely geranium-like, after all.

It’s probably some sort of wild gourd. Could be a squash of some sort, I suppose. But…does that look like a zucchini or a crookneck to you? Naaaahhhhh….  SDXB had a squash-like volunteer in his yard a couple of years ago. Hoping for a bonanza, he let it grow. It turned into a leggy, sprawling vine with hard, inedible fruits, evidently a native gourd that never made it to cultivation.

Budgets are Sexy hosts an amazing story in which blogger “Joe Taxpayer” claims to have turned a $4,550 profit by taking up a credit-card lender on a 10% back offer: he and the wife used this miraculous Platinum Mastercard to buy $50,000 worth of Visa and AMEX gift cards. It worked for him. But…hmmm…. Don’t try this at home, kids! 😉

At I Pick Up Pennies, Abigail ruminates about the crying need (or not…) to own a smartphone. In the ensuing comments, one of her readers mentions an app called Pinger that allows iPad and dumbphone users to make free phone calls and texts. Suddenly this makes my iPad look a lot more interesting…

Over at My Journey to Millions, Evan contemplates the strategy of borrowing from himself (i.e, against various assets) to come up with a larger down payment on the house he’s buying. Uh huh. That’s one of several ways Ex-DH and I got ourselves one million dollars (count’em, $1,000,000) in debt. Argh! If ya can’t pay for it today, don’t buy it!

Mrs. PoP has been having a bit of an anxiety attack over the advent of her mother, who intends to visit for the next eight days. {sigh} I wish my mother could come and visit.

She died before M’hijito was born. She’d be 101 now, if she hadn’t been murdered by the tobacco peddlers. (And yes: selling an addictive product that you know causes cancer, stroke, and cardiac disease is indeed a form of homicide.) I wonder how different our lives would have been if she had lived even to my age, to say nothing of the 94 years other women in the family have reached. My son’s would have been better, of that I’m pretty sure.

At Bargaineering, Jim Wang is not quite so harsh on the tobacco druglords as I am…but check out this discussion of the relative cost of cigarettes for low-income smokers. 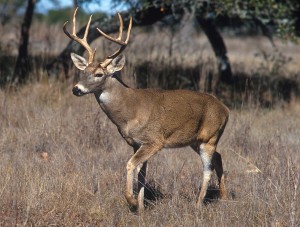 Budget Glamorous is calculating some strategies for gardening on a shoestring. Apparently she has a nice green thumb, for she reports being able to revive those underwatered, peakèd plants the warehouse stores stick on a back shelf and peddle for a few pennies. Where she lives, though, they have a foraging deer issue… Where there are deer, can coyotes be far behind? Maybe set out some dog food to call the coyotes in? Deer repellent on four feet!

Eemusings is filling a blog break with a whole series of guest posts at Musings of an Abstract Aucklander, some of which are very good. I got a kick out of cantaloupe’s reflections on what she learned while couch-surfing her way across the U.S. this summer.

Hmmm… Just got a notice from Tie the Money Knot that yesterday’s post, “The Relativity of Time,” has been accepted for this week’s Carnival of Personal Finance, slated to go live tomorrow morning. Thanks for that, TTMK! [Update: Gosh…that post made Editor’s Pick! w00t!]

Have you seen this province in Crystal’s blogging empire? The proprietor of Budgeting in the Fun Stuff, she’s built a number of other sites. This one, which discusses copywriting for various purposes, goes into detail about writing for business websites (and other purposes). Of interest to bloggers, here’s a really good disquisition on five common mistakes blog writers make.

At Blue Collar Workman, TB rings his readers’ bells with a rumination on fences. This post elicits a long series of crazy neighbor stories. Very entertaining!

Today FMF has his usual Sunday sermonette at Free Money Finance, in which he reflects that the advice dispensed by prominent personal finance gurus is basically the same common sense that appears in the Bible. He reflects briefly on how modern-day Americans could have lost track of that common sense.o

Afford Anything came home from a camping trip to a plague of headaches. She explains why delegating tasks is the best way to get a life.

Heh heh heh…you probably have to be an academic to appreciate this. At first, I didn’t realize it was a parody, so near to truth does it ring.

In the seriously??? department, did you know there are people—make that “people who don’t live under the Seventh Avenue Overpass”—who argue with a straight face in favor of going unbanked? The Digerati Life hosts a guest blogger who advocates abandoning commercial banks and following a 100% cash-only lifestyle. Generated a whole lotta comments at TGL.

The hour grows late. The dog wishes to dine. The weekend’s almost over. And so, to work…