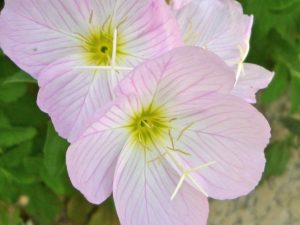 The present case in point: a mound of Mexican primrose that has grown in the backyard for several years. Some there are who regard this plant as invasive, but in my experience it stays where you put it. Assuming, of course, that you put it in a flowerbed, not broadcast seeds over a hillside… 😀

Well, the primrose around the pool is very happy, but over the past year some kind of bug got into the backyard mound.  Because gardening is a laissez-faire proposition here at the Funny Farm, I never got around to doing battle with the critters. Think I sprayed them a couple times with dilute Dawn detergent — an effective insecticide, but you have to get it on the little beasts. And because the mound is kind of out of sight from the back porch and the pool area, it’s been out of mind, too. 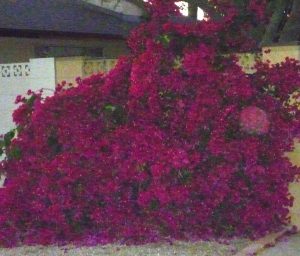 Result: as spring is sproinging, those plants are nothing but sticks. Green sticks, promising a possible resurrection. But sticks. Meanwhile, the pool is alive with beautiful pink flowers, and some are even growing in the crevices between the flagstones. So it doesn’t look like the mound is going to come back this year.

So this morning being unduly cool, I trotted out there and pulled up or broke off all the denuded sticks. Presumably it will soon grow back — it’s hard to kill this stuff. And when it does revive, I’ll have to remember to mist it with Dawn every week or two.

A-n-n-n-n-d…what else remains to be done, having been put off interminably through all the tolerably cool winter months?

None of these is very difficult. And in fact, despite a year of neglect and the rainiest winter on recent record, there just isn’t all that much that needs to be done.

This house is absurdly easy to take care of. But of course…I planned it that way.

My friends who moved to the Beatitudes retirement home sicced that place’s marketing department on me. This morning a woman from their sales office called and asked if I wouldn’t like to take the grand tour and listen to her pitch.

Well. Sure. I’m willing to do that. They’re building a whole sub-campus of patio homes that look to me one helluva lot better than an apartment in a vertical hive. So yeah: I’m curious. 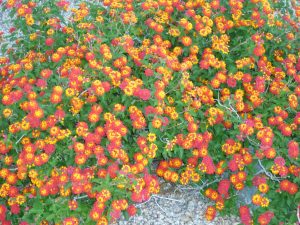 What I really would like is to live here until I die. Which is not at all out of the question, given how minimalist the maintenance tasks are. All that would be needed to keep me here into my full dotage will be a competent cleaning lady and a good yard dude. A decent handyman would be nice, too. And no matter how many people I have to hire to keep this place up and myself in food and clean clothes, the cost would be nothing compared to the cost of living in one of those old-folkeries.

And despite the Bum Express delivering drug-addicted derelicts to our front doorsteps, the fact is that this is one of the few even vaguely affordable in-town neighborhoods — if you think of $350,000+++ as “affordable.” Young people have discovered it. And they’re gentrifying in swarms. Just on Ruby’s short doggy-walk circuit, four houses are being renovated, big-time. One fix-&-flipper just sold for $729,000 — an outrageous amount that represented a shameless rip-off of an elderly single man, that’s true: but there it is. It still goes on the record as what these houses are “worth.” Even though that price is ridiculous, it nevertheless will push our values inexorably upward.

At this point, I could afford to move to Prescott, a sweet and scenic little burg where property values are inflated by incoming Californians. If my son didn’t live here, I probably would. But as long as he’s in these parts, I expect I will be, too.