Perfect timing!! Yesterday morning I made a Home Depot run to retrieve some more Mexican primrose seeds to replant the garden trashed by the Invasion of the Grass Monster from Bermuda. Naturally, they didn’t have any. But they did have amaryllis and paperwhite bulbs for exactly half the price demanded by my favorite local nursery.

Who could turn them down? 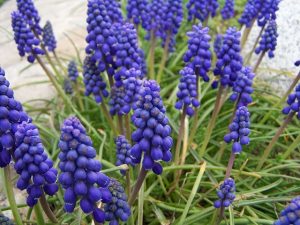 While rummaging through the bulbs rack, I came across something called Muscari armeniacum. Never heard of it. But it looks extremely neat: bright blue flowers with long grassy-looking leaves. Apparently they’re very hardy and ultra-prolific — gardeners in some parts of the country complain they’ll take over a flowerbed and everything around it.

Well. That would be just fine by me. They also apparently will grow up through grass or other bedding plants, which would be great if the Mexican primrose has managed to reseed itself — which it’s fully capable of doing, bermudagrass be damned.

So I planted the 20 or 30 bulbs that came in the package, mostly by the pool but also a few near the west deck. The amaryllis went in a shady spot on the west side — those things grow madly, once a year, outdoors in a sheltered spot here. And two of the paperwhites went in the ground, two in a pot. And three eight-packs of assorted posies also went into pots and flowerbeds.

Shortly after all those babes got shoveled into the ground, the sky began to clabber up. Along about mid-afternoon, it started to rain. Not just rain, but pour! At first I thought it was hailing, but no: it was just a hard rain. It rained and rained and rained all afternoon and into the evening. It was still raining when I went to bed last night.

This morning the sun is shining and everything is magnificently deep-watered. Even got to turn off the watering system this morning. 🙂

Remaining to do in the poolside area:

• Prune the tea rose
• Prune the orange variant of yellowbell, which has turned into a kind of monster itself
• Prune the blue plumbago, speaking of summer monsters
• Prune the Lady Banks rose, which now does its job of hiding the pool equipment but wishes to return them to the jungle

Houses are a helluvalot of work. But on the other hand…what else have I got to do? And when all these little plants grow, they’re very satisfying.

I wonder if I’m still strong enough to lay brick. Hmmm…. The sand is out there…all I’d have to do is install some edging, level the sand, screed it, set the brick, and broom extra sand over it. Hmmm….

Once I laid a thousand bricks to build a patio in our yard in Encanto. Turned out pretty damn nice, too. But I was about 28 then. This is forty years later…hmmmm…..  On the other hand, I do not propose to lay a thousand bricks. I propose to lay enough to build a pathway where Ruby and Cassie have created a racetrack around the orange trees. Where they run, they knock aside the quarter-minus ground dressing (which is basically nothing but coarse sand), creating an uneven and unsightly mess.

I could use that quarter-minus as a base for a wandering brick path, which they could race around on without digging up the desert landscaping. A-n-n-n-d it would add some charm to the backyard. There’s nothing like a mysteriously meandering pathway to make a garden. 🙂

But for now, it’s off to the races! Et alors, jusqu’à demain.