Fall is Arizona’s second spring. The plants recover from their summer heat exhaustion and many begin to blossom again. And the Human always evinces symptoms of spring fever. To wit:

Fortunately rather little work is in-house just now. It looked bad yesterday when a prospective new client sent an inquiry for editing and indexing of a bilingual art exhibition catalogue. But mercifully, she’s far from the editing stage. So I can indulge in my favorite unhealthy habit: loafing.

In that department, I want to catch up with the many yard blandishments I’ve neglected during the summertime funk. Neglected longer than that, really: I fell into a kind of depression after the year of surgeries, from which I’ve never recovered. I simply have not felt like doing anything, and so have wasted unimaginable numbers of hours playing computer games.

One result, as I mentioned a while back, is that mountains of accursed bermudagrass took over the poolside flowerbed.

Honest to God. It should be against the law to plant this noxious weed in Arizona. Or anywhere in the world. Arizona’s answer to kudzu, it’s the most aggressive, invasive, unkillable monster in the plant kingdom.

Several doses of an Over-the-Top formulation that the company no longer makes did finally succeed in killing off the top growth. It’s almost impossible to kill the root system, but at least the existing growth was dead enough to cause me to get off my duff and dig it out.

What a job!! You can’t just pull it up. It sets roots like steel claws. If you try to pull up the yard-long runners, they snap off at the surface, leaving the underground parts to sprout another day. Another day very soon… 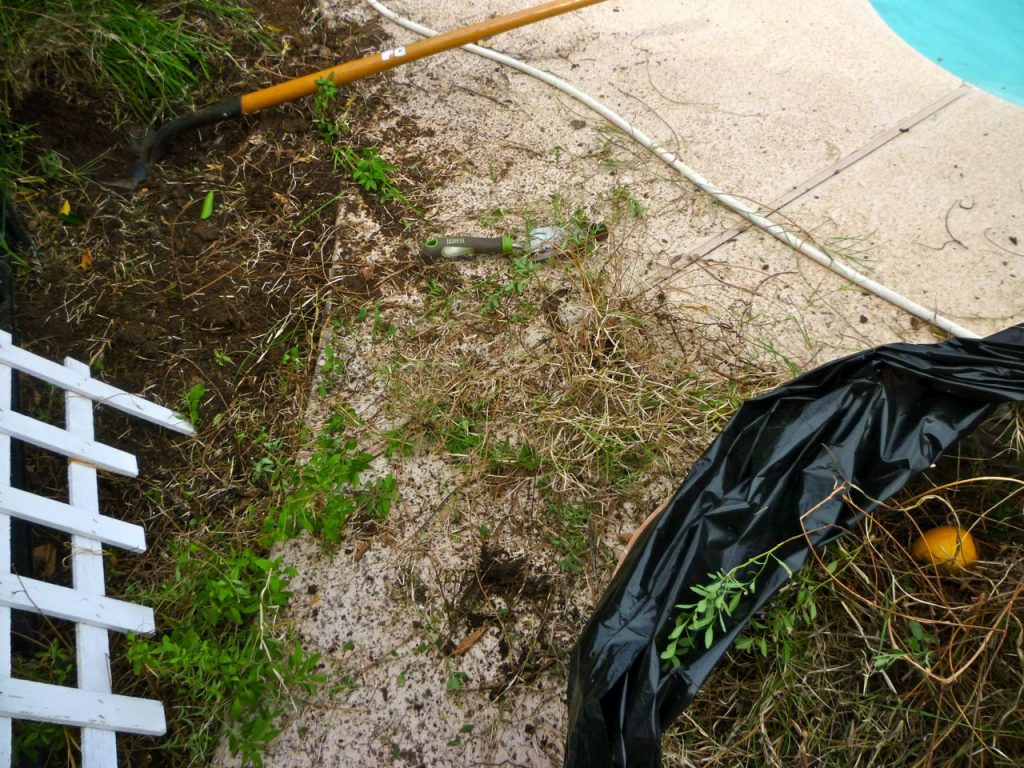 An ordinary trowel will not suffice to excise the roots, especially not when they’re set in Arizona’s clayey soil. So you end up having to get a shovel and lever the damn stuff out, to a depth of 18 inches or more. Even then, you can’t even begin to get it all out of the ground: 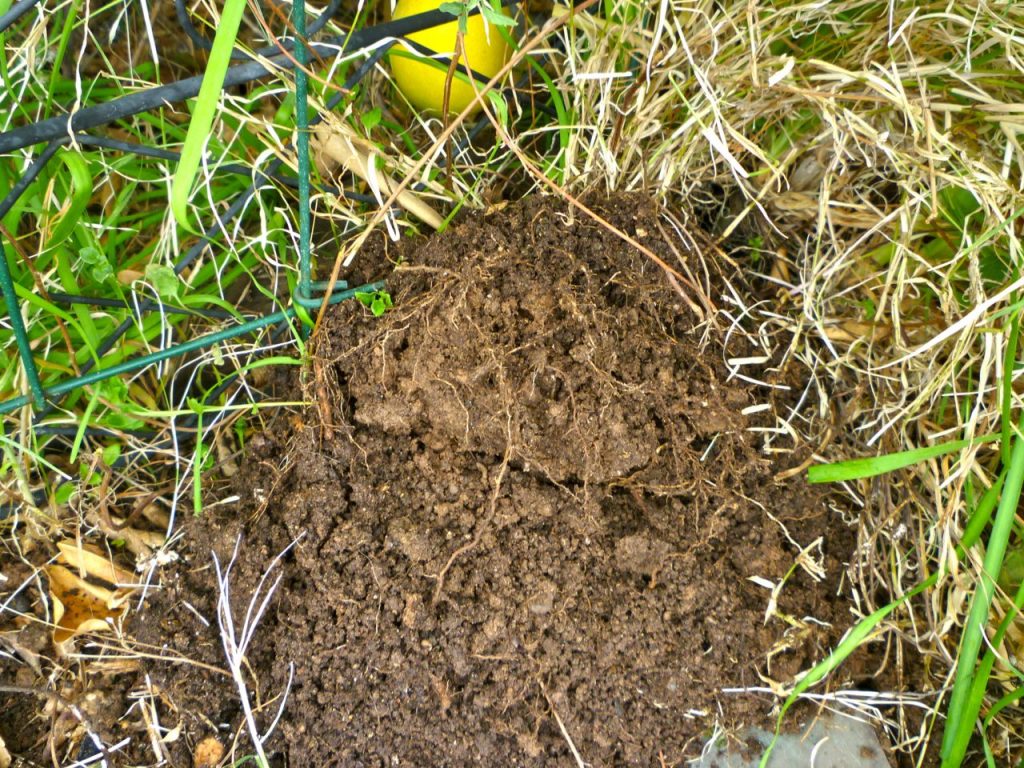 Here’s a nice view of what’s still in the ground out there. Any root you leave behind, any sprig you leave in the dirt will promptly sprout new ugly grass. It spreads by root, by runner, and by seed. Birds blithely carry the seeds everywhere, as does the wind.

People here have given up trying to fight it. Instead, we plant it as lawns and cover golf courses with it. It’s easier to mow than St. Augustine, a much handsomer and less invasive grass, one that (unlike Bermudagrass) will even grow in the shade of a tree. And because all you have to do is pour water on any bare patch of ground to get it to grow, I guess people think it’s easy to cultivate.  That may be so…but it sure as hell isn’t easy to uncultivate!

You really don’t even have to throw seeds down, since the entire state is infested with blowing bermudagrass seeds.

Ultimately I ended up with a gigantic bag of stolons and roots, which I dropped by the back gate for Gerardo to drag off. 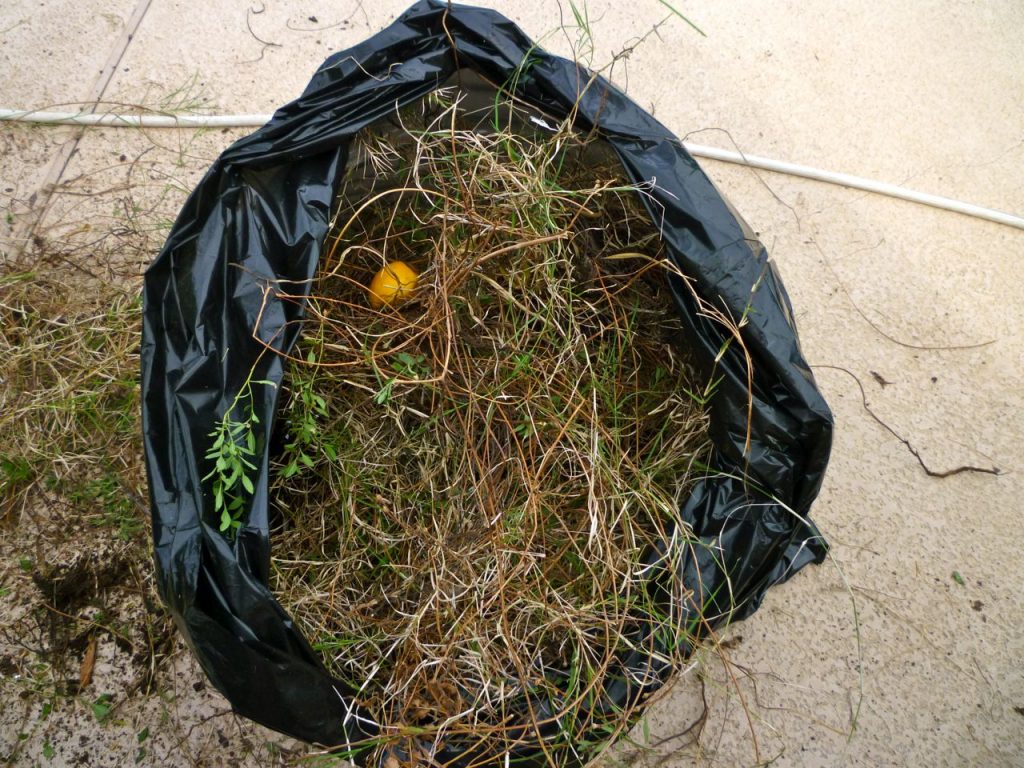 Happily, he and his dudes came by yesterday afternoon to shovel out the yard. So now we have a temporarily clean flowerbed next to the pool — you can see what a small area filled up the largest black bag available on the market. 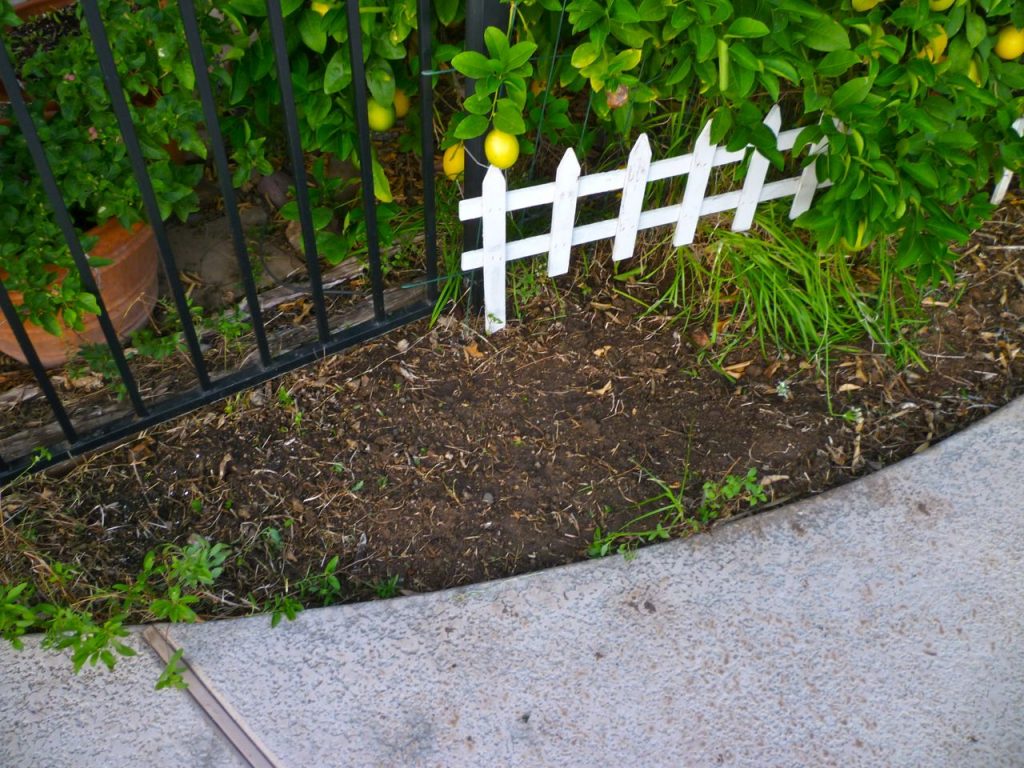 Over the next year, I’ll have to spray Over-the-Top (or rather, its new iteration, Ornamec 170, which still contains the grass-killer that Fertilome has so kindly taken away from us) about once a week, until the resurgent grass gives up. Probably once the weather cools off, it’ll be more like once a month, but in the summertime, it will take frequent spraying and digging to get the damn stuff out of the ground there. 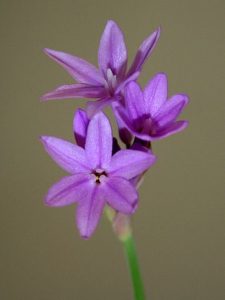 The Mexican primrose that hadn’t been crowded out was unaffected by the old Over-the-Top, as were the society garlic plants that have spread around in there. They’re stinky little plants, the garlics, but they make a pretty flower.

That stupid-looking white picket thing is there to help block Ruby the Air-Headed Corgi Pup from getting into the pool area. All three of the dogs who preceded Her Nibs had enough sense, after falling in the drink just once, to freaking stay away from the water. But Ruby? Ohhhhhhh no! She wants nothing more in life than to tear up and down the 18-inch-wide coping on the far side, where she invariably topples in to the deep end. Then I have to dive into the (sometimes startlingly cold) water to fish her out.

When I go out to buy some new Mexican primrose seeds, I’ll try to find some new, taller black metal garden border to stuff in there. Either that or get some black paint and spray the damn thing.

Ruby is slightly wall-eyed. Her right eye doesn’t point straight ahead — evidently dogs can get strabismus. It’s something she was born with, and it’s never straightened. I imagine it has the same effect in dogs as it can in humans: interferes with depth perception. SDXB has strabismus in one eye, severe enough that when he went into the Air Force a doctor was surprised he could see at all — in fact, he has 20-20 vision. But his depth perception is decidedly off: he’ll knock over glasses at the table, or hit them against the kitchen faucet when he’s washing dishes.

So I suspect Ruby simply cannot tell that the water is not a hard, flat surface. Cassie, Anna, Charley, and Walt all seemed to see that something deep lay there. But Ruby…she doesn’t doesn’t get it. Soooo….she falls in.

Nor does she swim well. Like Cassie, she panics when she gets wet — in fact, she panics more so than Cassie does. Cassie can swim, although she still can’t figure out how to find the steps. Ruby just flails. She sinks quickly when she falls in the water. So if she tumbled into the pool when I wasn’t right at hand, she would drown.

Welp, it’s past time to get up and run around: Back to Costco to return the pair of jeans whose right pant leg is three inches shorter than the left and the box of seed-bearing grapes whose label I misread as “seedless.” Then on to an ordinary grocer for a few avocadoes, and up to HD for the metal anti-puppy fencing.

Then, I suppose, I’m going to have to actually…work.