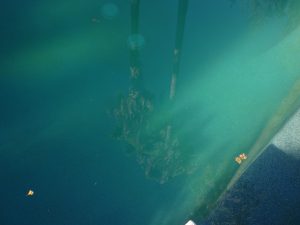 So tomorrow the Swimming Pool Service & Repair crew is supposed to come over to drain the pool and start a massive cleanup. Nothing that I’ve done has halted the steady swampification of the water, which now looks like something that should harbor a Creature from the Black Lagoon. You can barely see the drain covers in the deep end.

Frankly, I’ll be surprised if this Great Deswamping works, because I believe the problem is the heat evinced by dark color of the unfortunate PebbleSheen surface, whose application was one of the great errors of my home-owning career.

My son came over yesterday and tried to persuade me to cancel this project. He’s convinced the problem can be solved by the application of a few bottles of Clorox. I explained that Clorox IS liquid chlorine, which I have applied to the tune of several dozen gallons. Yesterday I ran out of liquid chlorine and out of money, so started using the granulated chlorine remaining in the shed. This, I applied along about 2 in the afternoon, after having poured in my last gallon about 7 this morning. By the time M’hijito arrived, around 6:30 the chlorine level was down to nil — meaning enough to last 2 1/2 days was gone in 4 1/2 hours.

Mr. Johnson, the former health inspector and pool chemical guru, says that kind of chlorine consumption is the result of the chlorine interacting with organic matter in the water — meaning algae, leaves, dead insects, sweat, pee, whatever. When Cl disappears that fast, it means organic matter is high — which we know from testing the water, too.

So, hope springing eternal, I had dropped Harvey the Hayward Pool Cleaner in there and along with the nuclear blast of chlorine. He did at least vacuum up the algae clinging to the floors and walls, but that decidedly does not mean they’re gone. They’re just in the filter, inside Harvey, and floating in the water.

Just now the pump is off, the motionless emerald-green water is opaque as fog, and we await a miracle.

We shall see if SPS&R’s scheme works. I’ll be very surprised if it does. I think we need to apply an algaecide such as YellowOut, which entails a cleaning the filter ($150), then dumping chlorine and the algae-killing chemical in a carefully calibrated ratio, running the pump 24 hours (again) for another couple of days, then cleaning the filter again ($150, again).

In other fields of minor catastrophes…

The back door’s latch set fell apart — its handle came off. Appeared that a set screw had fallen out and probably gotten vacuumed up and then tossed in the trash. Sooo… I drove over to my favored locksmith, a venerable operation in these parts, where I figured I could buy a set screw to fit a Kwikset door handle. 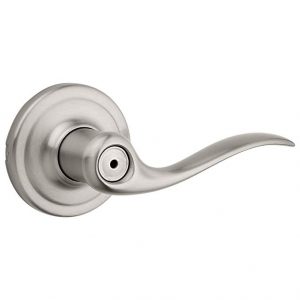 Guy sez, “Wellllll….. We can’t know what size set screw without seeing the cylinder that it fits in.” So, since (obviously) I can’t take the whole damn thing out of the door to traipse it over to their shop, I arrange to have a locksmith come over and fix it.

That would be, we might conclude, exactly what he had in mind.

On the way home, I think… “I’ll bet Home Depot has a set screw that will fit Kwikset hardware.” So drive up there. Find exactly the same door handle set on the shelf. Ask if they can sell me a set screw.

HD guy sez, “Chances are you don’t need a screw. These things are known to work themselves up into the cylinder, not out. All you have to do is put the handle back in place and rotate the screw back outward.”

“What size screwdriver will I need?” I ask, thinking I may or may not have one that’s small enough.

“You need a hex wrench. Here: take this. Bring it back the next time you come in.”

“Thanks!” say I, fleeing before anyone can catch me.

And…darned if it didn’t work! The handle is now FIXED! For free. Not for a $100+ service call…

It was this lock & safe outfit’s guy who, I remain convinced, lifted my cardholder full of credit and Medicare cards when he was here rescuing the office deadbolt from the key I broke off inside it. Thank goodness at least I didn’t have my driver’s license in there. But…it never resurfaced, and the last time I had it was when I was standing in the living room forking an AMEX card over to that guy. I’m dead sure he took it, because if he hadn’t, sooner or later it would have surfaced.

The dog and I set out at quarter after five this morning. It was gorgeous outside. The heat seems to have broken a little, at least for the time being, so that early morning is a lovely time to walk two miles. And because the sun is coming up a bit later now, too, you don’t get the glare in your eyes as you’re strolling eastward.

A-n-n-n-d…in the small miracles department, Ruby the Corgi has lost a pound or two during all these early-morning walks through 90-degree heat, the result being that her little harness no longer fits her. She’s figured out how to wiggle free of it, and now does so regularly. So yesterday after she’d weaseled loose, I hooked her leash to her collar…expecting about 3/4 of a mile of mighty fight. But…but NAY! she trotted right along like she was a normal, leash-trained dawg!

Whaaaa???? We have that harness because she has, in the past, put up such a fight that she would hurt her neck and throat and bring on violent episodes of reverse-sneezing…which is really just a symptom of collapsed trachea. (“Just”…holeee gawd…)

Well. This was a switch.

Snapping the leash to her collar is a far cry from having to wrestle a squirming dog into a harness, secure it, and attach a leash. So I tried the collar-snap-on again this morning, and lo! The whole two-mile junket was accomplished as though she were a normal, sane dog. She did not try to trap the matched pair of labs. She didn’t try to pounce the Gay Guy’s miniature mutts. She didn’t even indulge a lunging frenzy at the Shi-Tzu Lady’s annoying fluff-ball. Nothing!

Admittedly, we didn’t come across her pal Sammy (the world’s silliest-looking pound puppy). But Sammy is benign and will not hurt her if she annoys him. Soooo…. It looks like wonders really DO never cease.