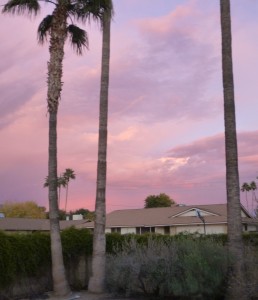 We haven’t had a real summer “monsoon” season for several years — make that quite a few years. The so-called “heat island” effect creates a bubble over the ever-bloating urbanized area that acts like the Dome in the TV show of the same name. The daily afternoon showers of yore are bounced off, to pass by miles to the north or the south. This is the first time in probably close to a decade that we’ve had a system strong enough to overcome that phenomenon.

And strong it is: strongly wet. Took the dogs for a walk around 5:30 this morning and came back drenched. Parboiled, actually. Jumping in the pool doesn’t help much: the air is so wet, water won’t evaporate off your skin and hair, so you don’t get the cooling effect. My hair was still damp this morning — from yesterday afternoon’s dip!

One amazingly wonderful thing, though: despite the heat, the mustard algae has not returned to the pool!

What caused the little green critters to decide to vacate the pool? Beats me.

I’m not doing anything different. The only odd act was adding two pounds of non-chlorine shock treatment, an oxidizer that is known not to affect algae. The stuff disappeared within a day of that, and it hasn’t been back, except for a few small patches that I was able to wipe right off…and that did not just grow right back within a few hours.

So that makes me feel a lot better about the proposed replastering project. Really, I figured I was about to spend $10,000 to cover the pool with yet another fine substrate for the rampant algae. Of course, the stuff is in the filter and the pump by now, and so jackhammering off the old plaster and smearing on expensive new PebbleTec product is not gonna get rid of it. Its just going to create a very expensive algae-infested pond.

But nay! Apparently not!

Whatever is going on, something has killed it off, and it’s not readily coming back. This is the time of year, when the water is like bathwater, that it grows most exuberantly. So the fact that it’s not running amok now suggests it will refrain from covering the new surface with green slime.

It’s so gray and murky out there…I”m surprised it’s not raining right now. It is, however, only about 90 degrees, rather cool. “Feels like”: ohh, about 110… Chance of rain is only about 24% (so we’re told), dropping to about 15% tomorrow. And that’s about it until next Saturday, when the chance of precip spikes to 15%…very, very briefly. 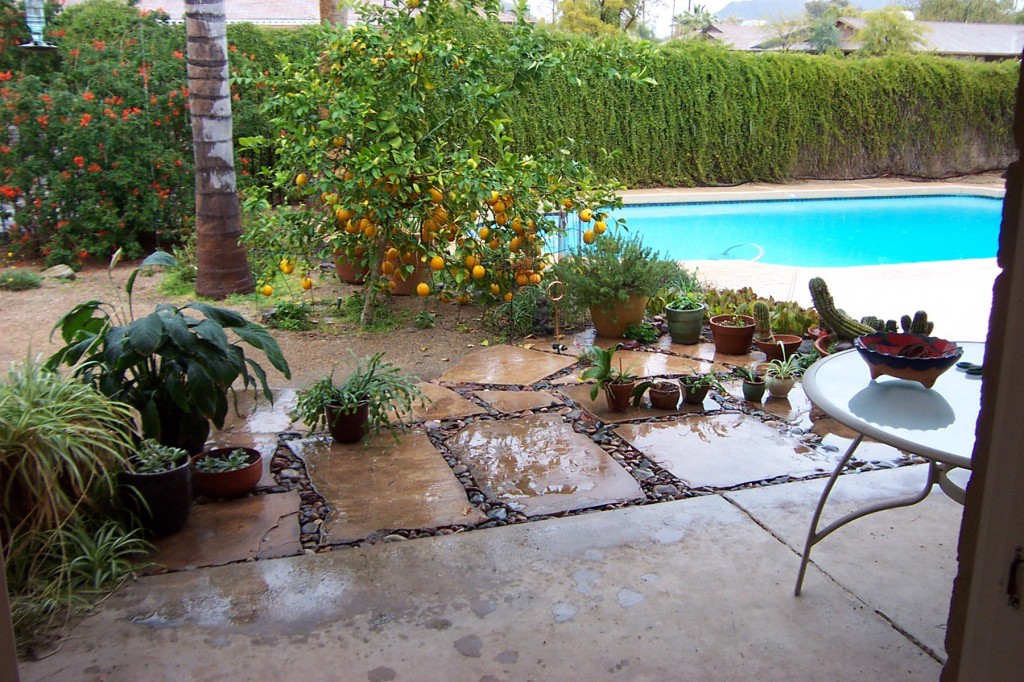 Plants singin’ in the rain