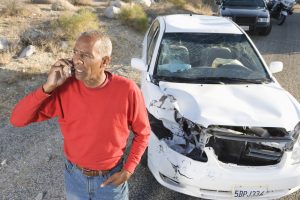 So if you have nerves of steel or you live someplace where the traffic isn’t as batsh!t as the Phoenix area’s, the idea of renting out your car’s back seat to Uber or Lyft riders sounds kind of appealing. Presumably you could set your own hours, and for relatively little effort pick up a few bucks to help make your life more tolerable.

Okay, hiring out as a rideshare driver is not everyone’s cuppa. But if the idea appeals to you, think it through carefully.

There’s something you need to know: your auto insurance will not cover you, your riders, or your vehicle if you get in an accident while you’re driving for hire. And while those highly lucrative companies that make their profits by treating you as an employee but claiming you’re not an employee may tell you that they’ll cover damages incurred while working in their hire, it ain’t necessarily so.

Friend of mine recently got into an accident while driving for Lyft. He did not understand that he needed to buy commercial insurance to cover himself, his car, and his passengers, which can cost ten times as much as regular personal insurance. Apparently the ride-share companies now claim, in a vague way, that they offer some degree of coverage, but whether they really do and to what degree is unclear. Not only is your regular personal insurer unlikely to cover your liabilities, when they find out you were driving for Uber or Lyft, they’re likely to cancel your policy. At that point, you will be left seriously up the creek…

Friend reported the accident to Lyft, whose representative told him to try to collect from his own insurance. He had been told (he says) that Lyft would cover accidents that happen while the car is contracted to the company. Supposedly, Uber and Lyft will cover medical expenses and other damages up to $1 million, even if an uninsured or underinsured driver is involved, if you’re on the way to pick up a fare or carrying paying passengers. But since ordinary auto insurance does not cover costs incurred while ride-sharing for pay, what Lyft was quietly asking him to do was to defraud his insurance company by neglecting to mention the circumstances. Unfortunately, he’s the type who cannot tell a lie.

Of course, his own insurer told him to take a flying leap.

So he returned to Lyft: they refuse to answer his calls. He is now stuck for the cost of repairing his own vehicle, for medical and other costs incurred by the customer, and for costs suffered by the other car’s driver and passengers.

And, he notes, the Lyft gig never paid enough even to cover the ordinary depreciation on his vehicle.

In some (but not all) states, you can buy rideshare insurance. These policies generally cost less than full-blown commercial coverage, but…one wonders.

Even if you have rideshare coverage, you must let your regular policy issuer know. If you do not, they’re likely to cancel your insurance.

But think about this: if my friend is right and net profit from gig taxi-driving doesn’t even cover the depreciation on your car, it certainly isn’t going to cover the cost of extra auto insurance. Car insurance isn’t cheap to begin with; it’s sure not going to get cheaper when you’re using your vehicle to drive strangers around through city traffic.

The take-home message? If you’ve got any common sense, look for some other ways to make a few extra bucks. Mowing lawns might be good. Cleaning pools is said to be lucrative. Painting houses? Cleaning? Anything but ride-sharing.