Wow, what a storm! Well, make that what a pair of storms! Right now the Interstate is closed in both directions, trees are down, a house is burning, water is up to our knees.

It started yesterday afternoon with quite a heavy, sharp rain. These squalls move across the desert quickly, and so within a few minutes the rain stopped and this brilliant rainbow, one of the brightest I’ve ever seen, stretched across the northeastern sky.

Thing looks like it’s coming down right in the neighbor’s yard, doesn’t it? LOL! Before this appeared, though, quite a lot of lightning, thunder, and pounding rainfall terrorized Cassie the Corgi. Moi, I was cool until a bolt of lightning crackled down right outside the back door…HOLY mackerel! We were both diving under the bed.

I thought it had hit one of the palm trees, but if it did, I can’t see any damage. Last night the skies cleared, leaving a beautiful evening for a late doggy walk. And this morning dawned clear with a few fluffy little clouds. A few…that, well.. coalesced.

About noon the skies darkened and then let loose with one of the wildest hailstorms I’ve ever seen. Vast quantities of ice fell from the clouds. By the time it stopped, the place looked like it had snowed. Here’s a view out the side door.

That green stuff is not grass. It’s leaves. The hail stripped about half the foliage off every tree in the neighborhood! Inez and Carlos’s huge tree has blanketed the street and their neighbors’ yards with leaves, and my yard is covered with an even, thick layer of shredded leaves from their and my trees—front and back. 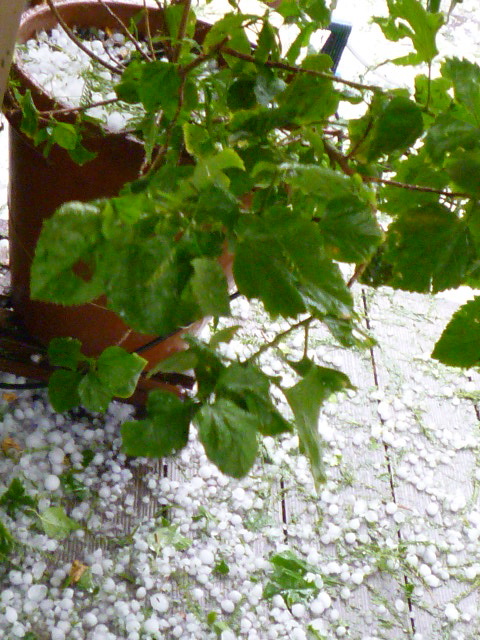 Everything was coated with ice. Naturally, first thing after dawn this morning I’d finished putting in the last of my vegetable garden. La Bethulia’s cucumber plant was reduced to a nubbin, and the two bell peppers she gave me were shredded. They might survive, but if they do it’ll be a surprise. The millimeter-high bok choy seedlings were thoroughly thrashed, as were the tiny chard sprouts that were just starting to peek out of the dirt.

A fair amount of water fell out of the sky, too. This puddle outside the back door is almost over the threshold, which is three inches higher than the patio floor, which itself is well above grade. Another quarter-inch of rain, and I would’ve had water in the house.

This storm was so extreme and so fierce, I thought it was going to break the skylights. In fact, in other parts of the city the hail did bust in car windshields, and as I write this, NPR just reported that 75-mile-an-hour winds were recorded. As the black thunderheads rolled in from the south, we could hear the same roaring sound that came out of the storm that smashed the Encanto district a couple of years ago: like a freight train barreling past. Only this was a great deal more violent than that storm, it least in our little corner of the Valley. I grabbed the dog and barricaded us into the middle bathroom, which has no exterior windows (except…ahem…a skylight…) and provides a sturdy cage of copper plumbing.

About the time the hail stopped, I had to get in my car and drive up to the campus for a meeting. What fun, driving in this stuff! Went up on the surface streets to avoid the likely chaos on the freeways. While I was going about 40 mph through thick traffic and heavy rain, some asshole thought it was hilarious to streak past me on the right so he could dive through a deep puddle at about 45 mph, fire-hosing my windshield and utterly blinding me.

This is the reason I don’t carry a gun in my car. Honestly. If I’d had a pistol, I’d have shot the sunovabitch. I certainly would have tried to shoot out his tires as I passed him while he stood in the left-turn lane (yes: after entertaining himself, he swerved across three lanes of traffic to park himself in the left-turn lane), and wouldn’t have regretted it much if a stray bullet had wandered into the driver’s compartment. No. You’re right. I have no restraint.

Yesh. Soon enough, the meeting adjourned and I headed back to the Funny Farm. By now more storm clouds were rumbling in. Threw some food on the stove before the power could go out, and just about the time the dog and I finished scarfing dinner, another violent hailstorm hit. We had hail at least an inch in diameter, some of it bigger. It sounded like rocks hitting the roof!

Power lines fell across the freeway, closing the Interstate 17 in both directions at mid-town. Underpasses flooded, and people stuck on the interstate found themselves in water up to their doors. The airport was shut down twice. Power poles went down, some of them through the roofs of utility customers’ homes.

Now it’s quiet. Quiet and finally, mercifully, gloriously cool. It’s down to 70 degrees on the back porch, the coolest temperature we’ve seen in three months.

And so, to walk the dog, and then to bed…