People who came here from other parts of the country think it’s already awrful hot. It’s not: yesterday the high only reached 91.

To my mind that’s fairly balmy. But I guess if you grew up in more temperate climes, it feels extreme. Oh well. Just wait till they see what it’s like on July 4. 😀 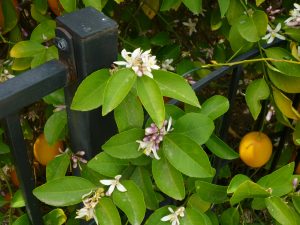 The plants are beside themselves, once again, with plant joy. The citrus has been blossoming for several weeks — tiny baby oranges, limes, and lemons have started to appear.

Just a few days ago, I planted some new chard seeds in a) a pot and b) a perennially sunbaked flowerbed. Speaking of perennial, the existing chard plants have occupied their pot for upwards of three years. Unlike other kinds of leafy vegetables, the stuff doesn’t bolt to seed in the summer (when it does sprout a seed wand, that doesn’t kill the plant), and it can live through a fairly bracing frost.

This winter some kind of tiny bug literally shaved its leaves off to their center spines. I thought the plants were done for. But lo! This spring, they sprouted new leaves.

The bugs went after them again, so I squirted a solution of Dawn all over the plants. Apparently said solution was a little too strong, though: it burned the chard’s leaves. Again, I thought it was done for, so went out and bought a package of chard seeds, figuring to have to start anew.. 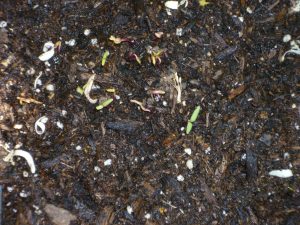 Nay, verily: the things have put out more new leaves. Meanwhile, the seeds — which I planted about three days ago — are already sprouting.

Planted some little chrysanthemum-like things in the pot, having heard that they repel bugs. Right. We shall see about that.

In any event, they’re kind of pretty little plants, and I think they survive in the heat here. 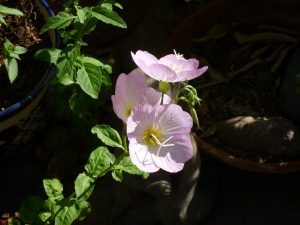 The Mexican primrose — in reality a kind of weed, a plant that Gerardo looks at aghast — is in full, ecstatic bloom. They make a beautiful pink flower on an upright plant. And because they are quite weedish, they spread like crazy and you cannot kill them. 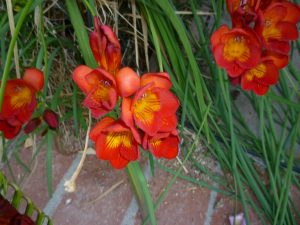 Lookit these orange things that sprouted from an ancient bulb. Don’t remember what they were called — if I ever knew. But aren’t they pretty?

The lantana, which began to struggle last fall and appeared to be about to wither and die, made it through the winter (to my surprise). It probably needs to be transplanted into a larger pot — lantana is a vigorous spreading critter, and I imagine it must have some space demands. Some varieties of the stuff will actually grow into a hedge in these parts.

Welp, I’d better get off my duff pretty quick. I signed up to go to a writer’s workshop here in town this afternoon. They meet on Sunday afternoons, which normally would be highly inconvenient for me (if not altogether unworkable), because most Sundays choir doesn’t unwind until after noon. Getting downtown through the wacksh!t traffic and fighting to find a parking place by 2 p.m.: not so good. But today we get a little “spring break” after the hectic doings of Holy Week: no church.

Because they meet in a fancy coffee house, you pretty much have to buy something — and we’re told a cup of plain iced coffee (hold the cream, hold the sugar, hold the fake flavoring) will put you back four bucks. Going there once a week is, shall we say, aversive to the frugalist. So…they’ll have to be pretty damn good for me to want to do this often.

The Bum Express goes right in front of the place, which would be grand if I had a friend up here who wanted to attend their meetings. But you couldn’t get me to stand around waiting for a train at the corner of Conduit of Blight and Gangbanger’s Way alone. Not on a bet. I wouldn’t like it even with another person along. But there’s no way I’d ride that thing by myself: not through our garden corner of the city.

This plan to find a writer’s group in town was occasioned by yesterday’s fiasco. The bunch I happen to favor meets in Avondale — it really is great group, the people in it very nice and smart and interesting and fun to know. But Avondale is halfway to Yuma from here.

It is an hour’s drive, door-to-door, from my house to the Avondale Civic Center, where they meet.

Yesterday the drive was enhanced by my realization, just as I turned out of the ‘Hood onto Gangbanger’s Way, that godDAMNit, I’d forgotten my credit cards & ID.

Soooo…had to turn back into the neighborhood, whereupon forthwith I got behind some poor soul who did not know where she was going and apparently had no GPS. She puttered along, blocking the road while peering back and forth and looking pretty puzzled. At one point she stopped at a tiny intersection and stood there, while she cogitated which way to turn.

Flew out of the ‘Hood, having discovered that Gangbanger’s Way is blocked up for pending goddamn lightrail construction, and headed across town on Main Drag South. This moved fairly smoothly, thank God, and I pulled up to the Avondale Library at exactly noon.

This, you understand, is actually “late,” because the guy who runs this group always starts precisely on the minute, and he expects everyone to be ready to go.

Fly to the door and find it…CLOSED.

The air conditioning has gone out and the flatland touristers who live in those far-flung HOA-ridden suburbs think 91 degrees is too hot to hold a library open.

We’re told the meeting is moved to some branch library on the far, far southwest side.

I look at that and think…nope. Not going exploring out here. An hour of driving to get here is quite enough. Besides. I’m hungry.

So I headed home, disgusted because I did want to hear my friend’s presentation.

If you want to live in lovely Phoenix, you need to develop an appreciation for long, frustrating drives. 😀 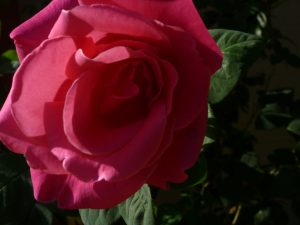